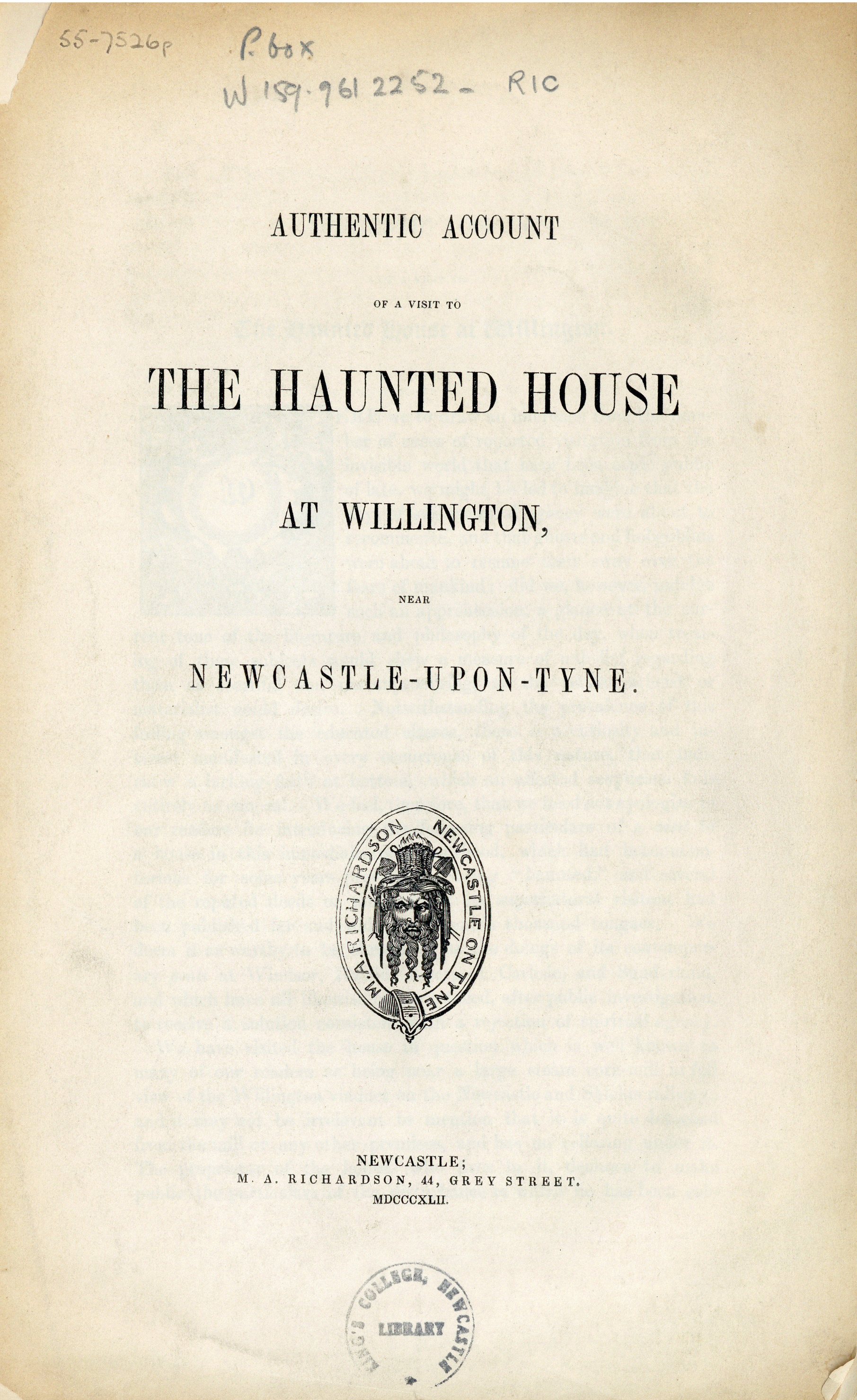 Title page from the ‘Authentic account of a visit to the haunted house at Willington near Newcastle-upon-Tyne’ (W159.9612252 RIC), published 1842

“I have about 30 witnesses to various things which cannot be satisfactorily accounted for, on any other principle than spiritual agency” pg. 6.

When mysterious circumstances occur out of the corner of your eye, where unknown noises are heard and items disappear from shelves and reappear on another. Lurking in the Special Collections and Archives stores is a wealth of material that tells of haunted castles, superstitions, witchcraft, mythical tales and ghost stories. Some of the material is often frightening, others delightful, intriguing and often sinister. Whether stories of the supernatural are viewed with scepticism or disbelief, there is often a curiosity and interest in occurrences of this nature.

The story that is about to be told is therefore left to the reader to draw their own conclusion on the subject. Retrieved from a cold, dark corner of the Robert White Collection is the pamphlet; an ‘Authentic account of a visit to the haunted house at Willington‘ (W159.9612252 RIC) published in 1842. 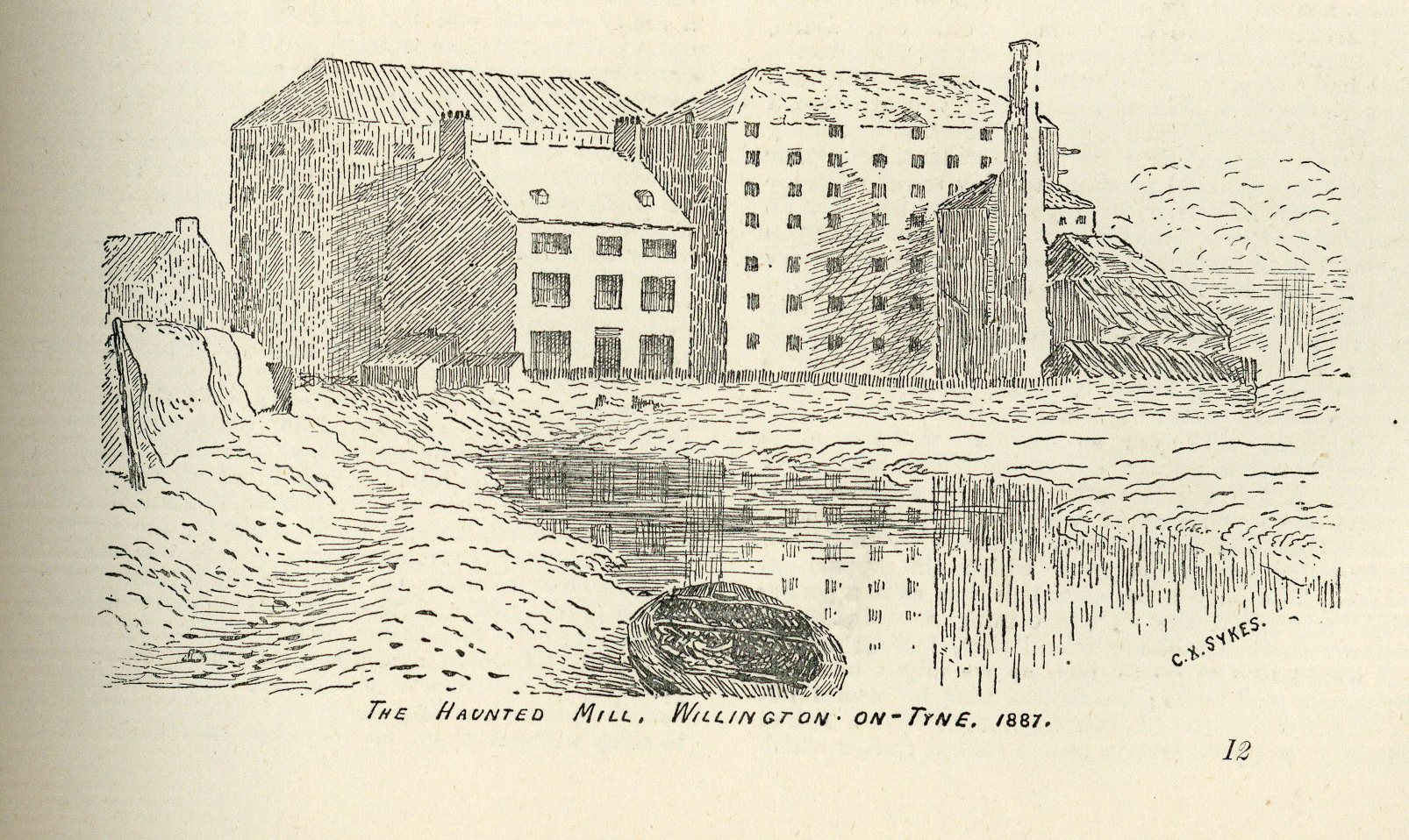 Image of The Haunted Mill in Willington in 1887, taken from ‘The Monthly Chronicle of North-Country Lore and Legend, 1887’ (Edwin Clarke Local Collection 2066)

Willington Mill near Wallsend in North Tyneside was owned by two Quaker cousins, George Unthank and Joseph Procter, and was the first steam-powered mill in the North East. During the 19th century it gained reputation as being haunted; said to be swamped by spectres, which included the ghost of a woman called Kitty who died during a terrible accident that occurred there. However, from about 1840, it is the haunting of the adjoining house that was occupied by Joseph Procter and his family that attracted the greatest amount of public notice. Bizarre noises, haunting apparitions and poltergeist activity shrouded the house and there were different attempts to solve the mystery. Perhaps the most famous endeavour was that of a young surgeon called Mr. E. Drury.

On the 3rd July, Drury arrived at the house to spend a night with his companion, Mr. Thomas Hudson (a chemist of South Shields). The house was locked up and every corner was searched and examined. Drury and Hudson were satisfied that there was no one else in the house apart from themselves, Mr Procter and the servant.

What followed has been recorded in the account; a noise was heard at approx. 11:50pm, a few minutes afterwards both Drury and Hudson heard a noise as if footsetaps were walking across the floor. A few minutes after, a knocking noise was heard followed immediately by a hollow cough from which the apparition proceeded from. The following events are further described in a letter from Mr. Drury dated Sunderland, July 13 1840, addressed to Mr. Procter;

“I took up a note which I had accidentally dropped, and began to read it; after which I took out my watch to ascertain the time, and found that it wanted ten minutes to one. In taking my eyes from the watch they became riveted upon a closet door, which I distinctly saw open, and also saw the figure of a female, attired in greyish garments, with the head inclined downwards, and one hand pressed upon the chest as if in pain, and the other, viz., the right hand, extended towards the floor, with the index finger pointing downwards. It advanced with an apparently cautious step across the floor towards me; immediately as it approached my friend, who was slumbering, its right hand extended towards him. I then rushed at it, giving at the time, as Mr. Procter states, a most awful yell; but, instead of grasping it, I fell upon my friend – and I recollected nothing distinctly for nearly three hours afterwards. I have since learnt that I was carried downstairs in an agony of fear and terror” pg. 7.

Further activity following this account was recorded This included a case of an apparition seen in the window of the house from the outside by four witnesses (a lady with connections to the Procter family, a man employed by the mill, his wife and daughter). This account is detailed below:

Extract taken from pg. 8 of the ‘Authentic account of a visit to the haunted house at Willington near Newcastle-upon-Tyne’ (W159.9612252 RIC), published 1842

In 1847, the Procter family vacated the house after 11 years. After the Procters had moved, local residents continued to experience hauntings. By 1890 the mill was closed and converted into a warehouse and the house was divided into apartments. The house was later torn down and for many years after there were still reportings of paranormal activity from workers at the mill.

# You can place your order by linking to our request form. The reference code and title will be ‘W159.9612252 RIC – Authentic account of a visit to the haunted house at Willington’.