Over the next few weeks Jake Wall, one of our Universities at War project volunteers, will be blogging about his experience of researching the stories of the WWI fallen using the university archives available in the Philip Robinson University Library.

Picking up from where things were left last week here are some new stories as reported by school magazines.

Sadly, details of Joseph’s college exploits seem to be limited, he was a member of the Officer Training Core and achieved the first of two qualification certificates, certificate A in March 1911. He was tragically killed in 1916.

It is a strange coincidence that Joseph and William Stanley Wylie were both awarded the same certificate at the same presentation ceremony. Thus, it is probable that two of our soldiers knew one another and were possibly even friends. 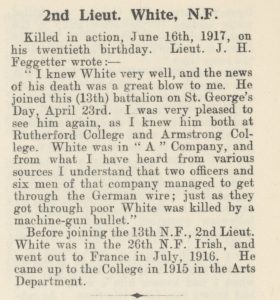 Samuel studied in the Arts Department in Newcastle in 1915 where he met Lieutenant J.H Feggetter, a very close friend. He joined the he 26th N.F Irish and went to serve in France in July 1916. Following this he joined the 13th N.F as a second lieutenant and died shortly after.

Feggetter later went on to write an obituary for White when he was killed on June 16th 1917. The end of any life is an occasion for sadness but the sense of melancholy was made far more profound in this case upon the realisation that White died close to his birthday and lived to be just 20. It is reported that he met this sad fate with a company of six other men who were machine gunned down while penetrating German barbed wire.

Wylie was awarded a bar to the military cross in 1918 for his bravery on the battlefield when he transported ammunition to the frontline in a 27 and ½ hour operation while under heavy artillery fire which killed many of the other men in his company. Wylie’s courage was noted in two separate dispatches. However, he sadly died in 1918 and is described as giving his life for his country.

More information on the Universities at War project, as well as the stories uncovered by our researchers so far, can be seen at www.universitiesatwar.org.uk.