For many of us, autumn is synonymous with falling leaves, darker nights, and wrapping up in warmer clothes. It’s a time when the clocks go back, and we can enjoy the last of the sunny days before winter sets in. However, in the Eighteenth Century, autumn was also synonymous with something altogether less pleasant: ‘autumnal dysentery’.

Dysentery was common in Newcastle and wider Tyneside during the Eighteenth Century, but reached epidemic levels during the autumns of 1758 and 1759. There were also significant outbreaks in 1783 and 1785.

Andrew Wilson (1718-1792) was a Scottish physician and medical writer, who studied medicine at the University of Edinburgh and graduated in 1749. He set up a practice in Newcastle a short time after and stayed in the city until 1775 or 1776, when he moved to London.

Wilson was in Newcastle during the 1758 outbreak, and ‘the conceptions that I then formed of the nature and genius of the Autumnal Bloody Flux, and of the true indications of cure to be adhered to in it’ (pp.1-2), he put into his Essay. The Essay was first published in 1760. The second edition that we have in Special Collections was published in 1777. Considering Wilson’s Edinburgh connections, it is unsurprising that he dedicated the tract to Dr John Rutherford, Professor of Medicine at Edinburgh, ‘my respected Master, my Patron, and my Friend’. 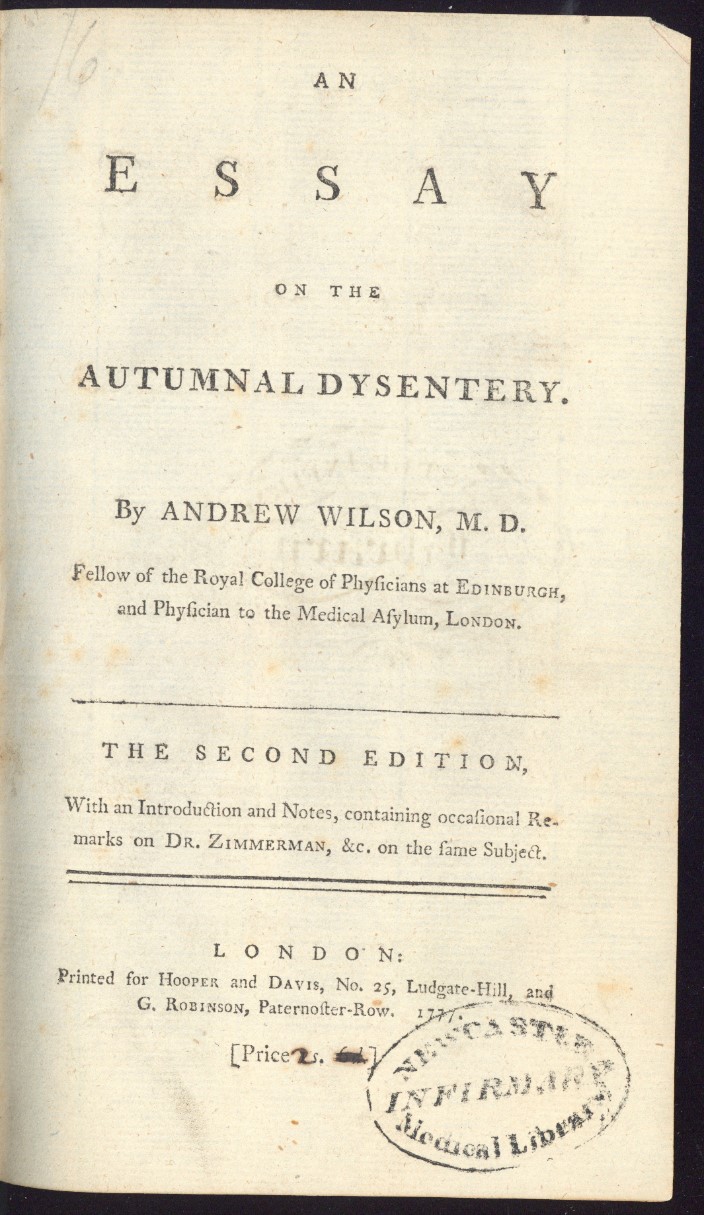 Wilson went into considerable detail discussing the causes, symptoms, and treatment of patients with dysentery. He offered a fairly gory description of the symptoms, which may not be suitable for those of squeamish dispositions…:

‘This disease is called the Bloody Flux, because more or less blood is generally, tho’ not always, mixed with the slimy fetid stools which are discharged during the course of it. The bloody discharge may be attributed to different causes, according to the degree, malignancy and continuance of the disease; such as, the vehemence of the inflammation, stretching the vessels opening into the cavity of the intestines, and straining red blood thro’ them, which does not naturally pass that length undissolved; the acrimony of the humours which are discharged into these guts during the inflammation, fretting and corroding the blood vessels…’ (pp2.3) 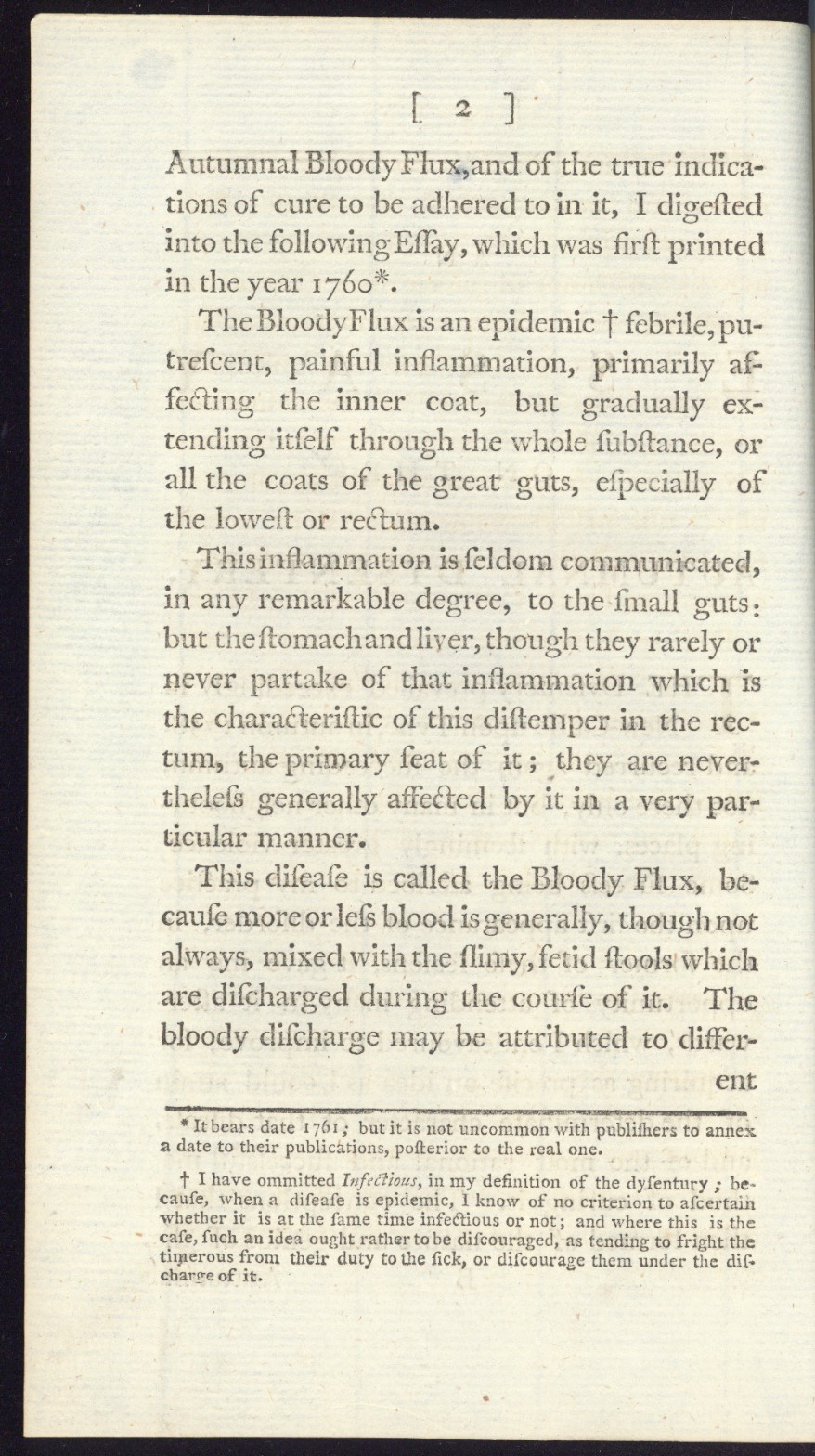 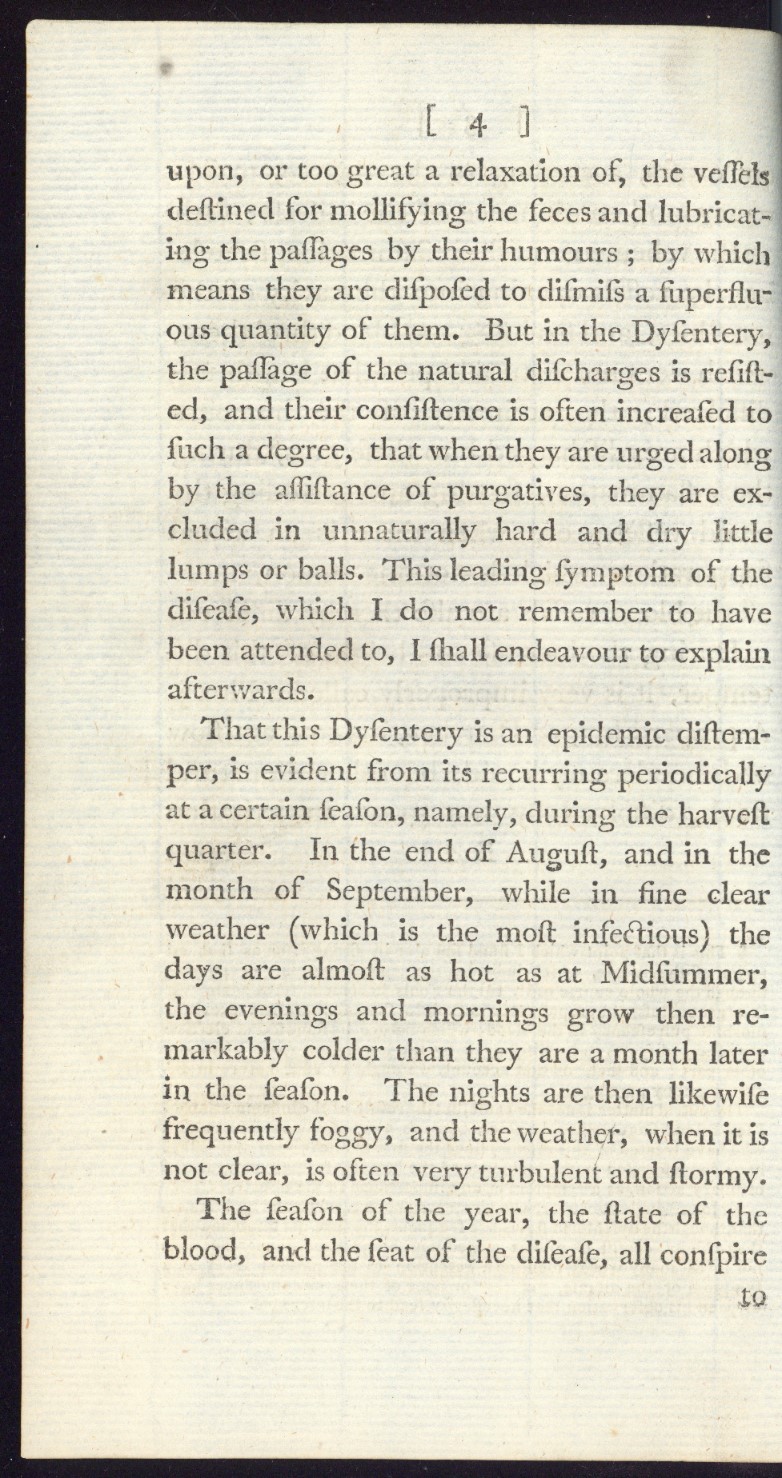 Wilson also mentioned how ‘This disease, like all epidemics, is… more frequent in cities and towns than in the country; among the feeble than among the strong…’ He also claimed that dysentery was ‘more frequent among the poor and labourers, than among the wealthy, and those who live better and pay more attention to their health’. As for the reason for this, he suggested that ‘indigence, but much more especially negligence in the article of cooling after heats by labour, exercise etc., exposes the lower class of people prodigiously to this and many other diseases’. (p.28) 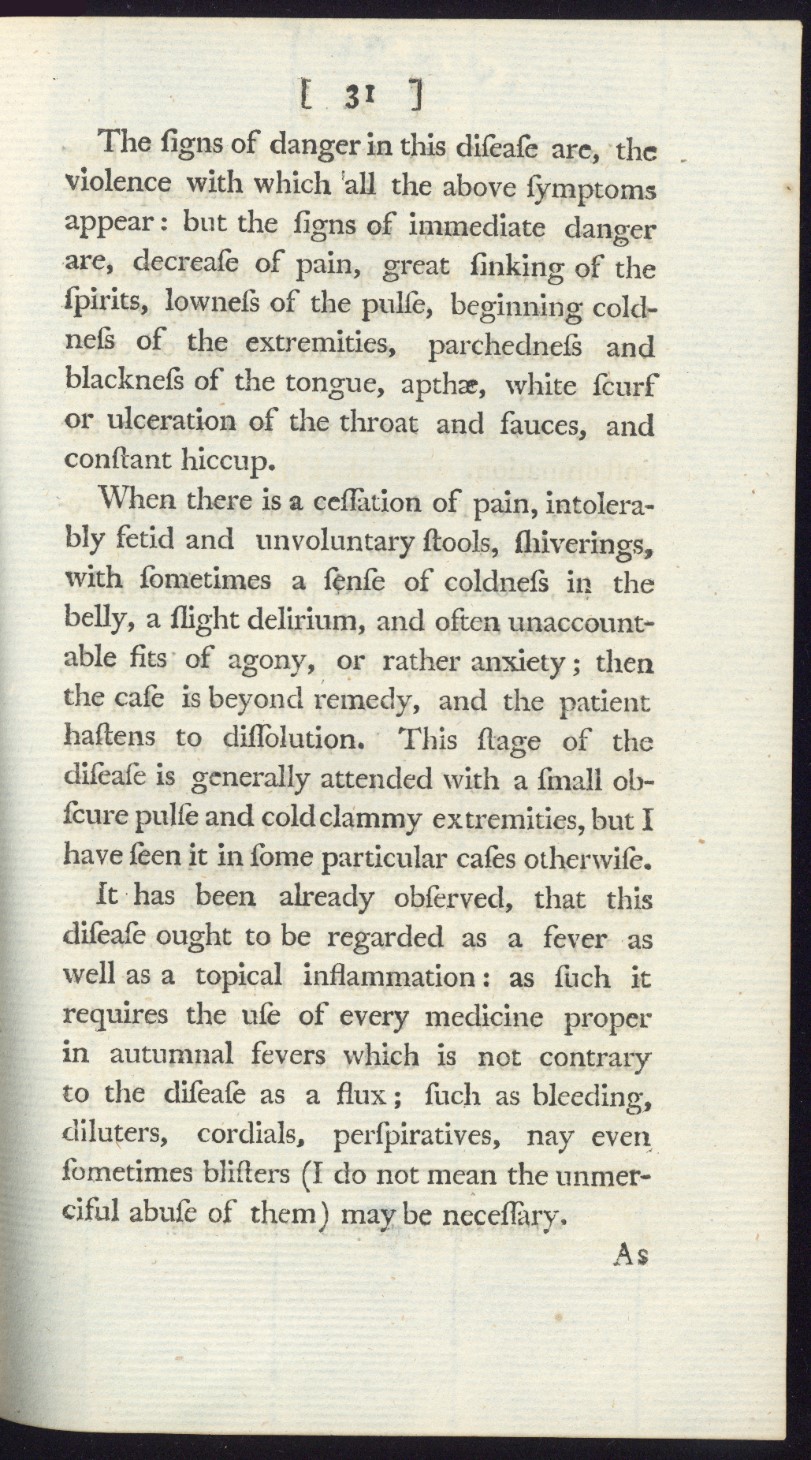 The second edition of the Essay, there is also the hint of medical controversy. In the ‘Introductory Discourse’ (which was new to the second edition), Wilson mentioned some of the recent publications on dysentery since his work was first published. Of particular interest to Wilson was a study by the Swiss physician Johann Georg Ritter von Zimmermann, titled A Treatise on the Dysentery. Zimmerman had been made Physician in Ordinary in Hanover to George III in 1768. 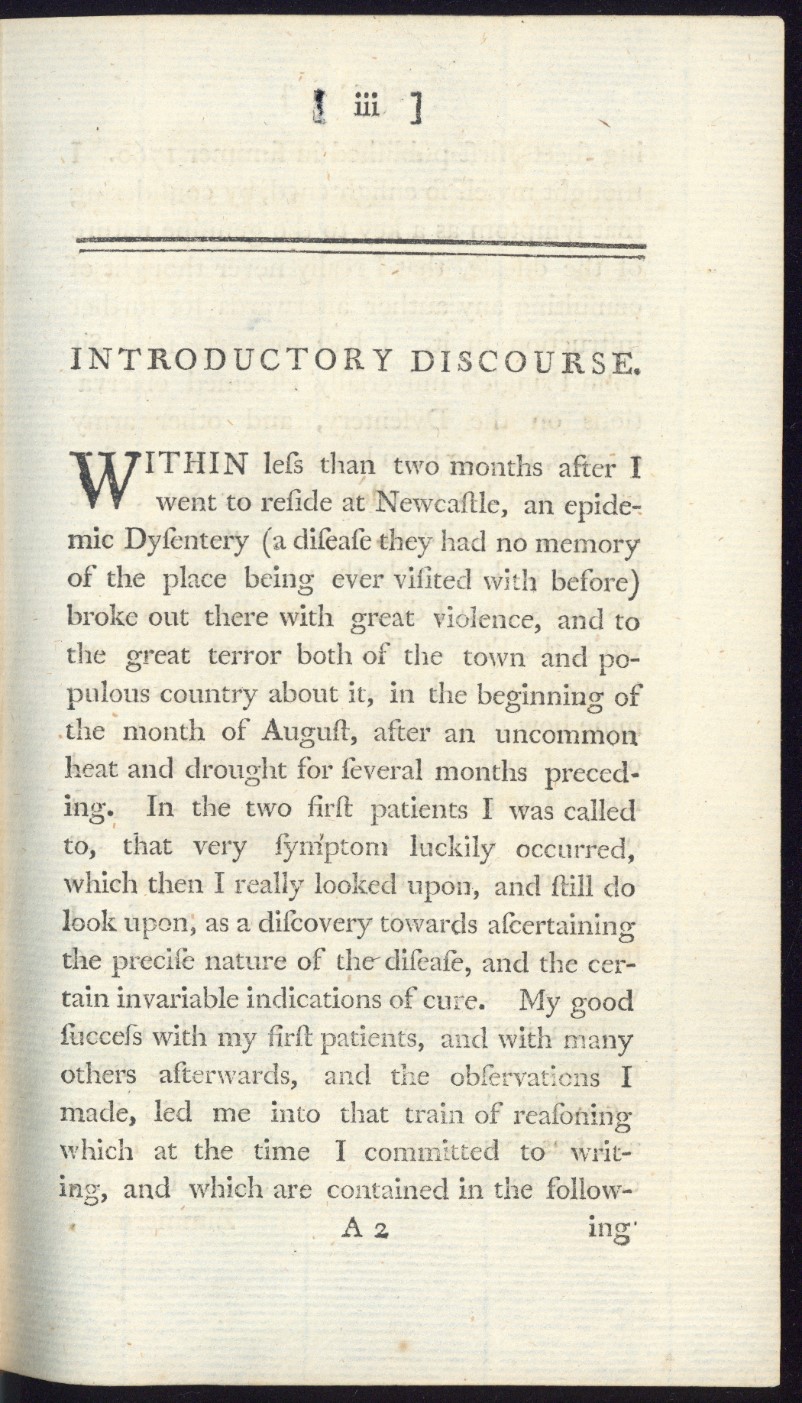 First iii of the ‘Introductory Discourse’

Zimmermann’s book was of such interest to Wilson because, in the course of reading it, he ‘discovered that he had made use of my Essay, and totally supressed his knowledge of it, while he was very profuse in his references to every other latter English writer on the subject’. Wilson argued that he ‘would be sorry to mention this circumstance upon presumptive evidence only, but he has extracted a pretty long case verbatim from my Essay, which was to be found nowhere else…’ Wilson found this ‘a very strange way… of extracting from a writer upon the very subject he was treating of, while he was, almost in every page, citing other authors who had written in English as I had done…’ However, drawing back from a full accusation of plagiarism (perhaps because of Zimmerman’s relationship with George III), Wilson left the question open, and stated: ‘I make no remarks upon it’. (p.V) 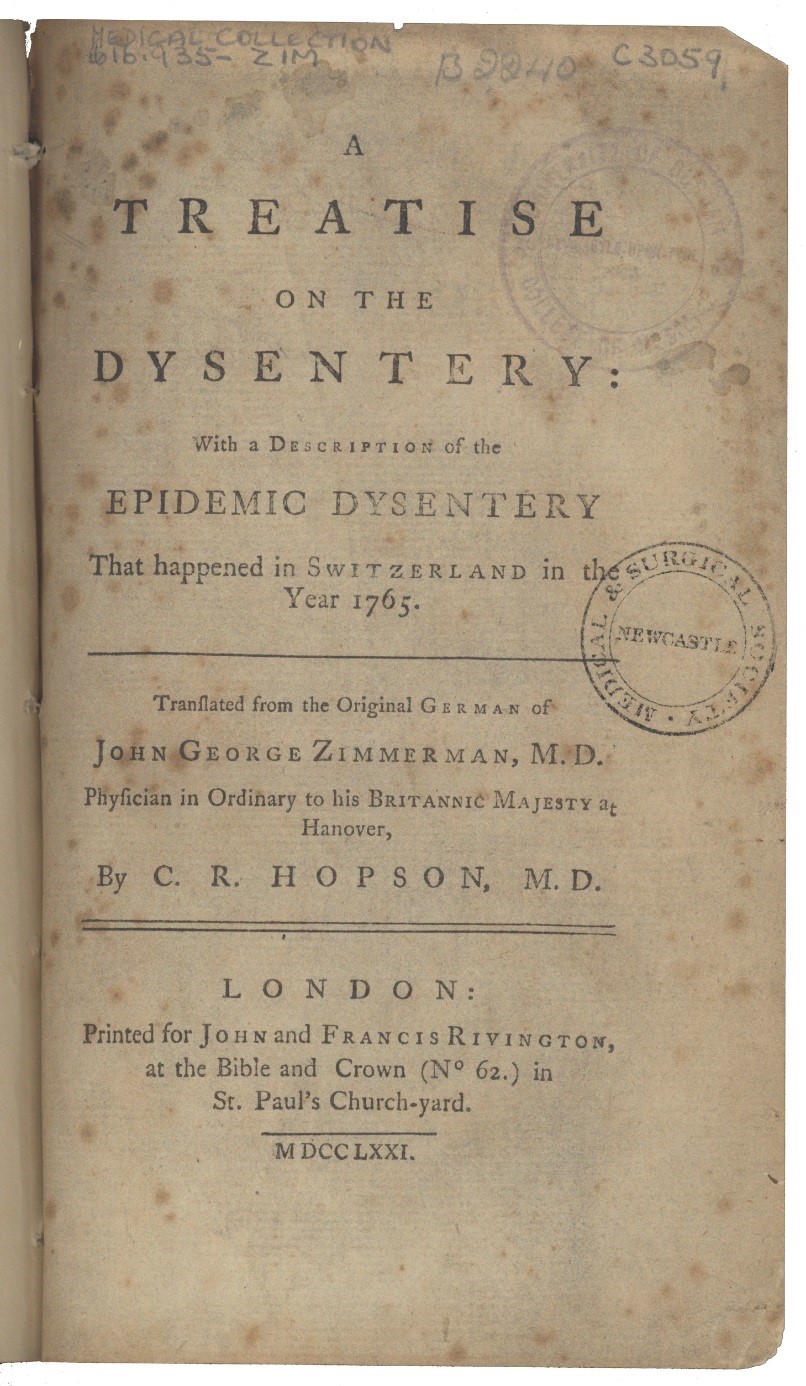 Newcastle University’s Special Collections have both Wilson’s and Zimmerman’s books here in Special Collections. Reading them and deciding whether there has been any wrongdoing might be a nice way to spend a dark autumn day, but only if you’ve got the stomach for it.

Johann Georg Ritter von Zimmermann, A Treatise on the Dysentery: with a description of the epidemic dysentery that happened in Switzerland in the year 1765 (1771) (Medical Collection, Med Coll 616.935 ZIM).