Written by Dalia Aizi, a MA Museum, Gallery and Heritage studies student, whilst on placement in Summer 2019.

Early on in our placements at Special Collections, whilst doing research for a new exhibition, we came across a beautifully illustrated book titled European Butterflies and Moths. Upon seeing the plates and reading the texts, we were inspired to create ‘The Beauty of Science: Seeing Art in the Entomological World’. We decided to create an exhibition which celebrates the artistic aspects of science books, which are often overlooked.

The life of W.F. Kirby

Born in Leicester in 1844, Kirby found a deep interest for butterflies at a very young age, which continued into his adult life. After his father’s death and the family’s move to Brighton, he became more involved in the entomological world, joining the Brighton and Sussex Entomological Society before he moved to Dublin in 1867. While there, he became an established and famous entomologist after his book, A Synonymic Catalogue of diurnal Lepidoptera was published.

In 1882, Kirby finished and published European Butterflies and Moths (19th Century Collection, 19th C. Coll. 595.78 KIR), which gives a comprehensive guide into the world of the Lepidoptera. 137 years later, the book is still easily read even for novice readers such as us, which he writes about in his preface, stating that the book is ’designed to provide entomologists and tourists with a comprehensive illustrated guide to the study of European Macro-Lepidoptera’.

The exhibition ‘The Beauty of Insects: Seeing Art in the Entomological World’ that was created as part of the placement in Newcastle University Special Collections and Archives can be viewed online.

Exhibition can be seen on Level 2 Exhibition Space, Philip Robinson Library, until October 2016

‘Showing the Way to Wallington’ gives a unique insight into the family life of Charles Philips Trevelyan and Mary Katherine Bell, who in 1928 made Wallington Hall their home until it was gifted to the nation in 1941. The images and articles showcased in the exhibition covering areas such as Arts, Politics and War, and come from the family photograph albums which Charles and Mary (better-known as Molly), compiled themselves in scrapbook form.

As part of an ongoing project, 39 Volumes are being digitised and converted into an accessible online virtual book format called ‘Turning The Pages’ by Karen Atkinson, our digitisation assistant in Special Collections. This exhibition contains some favourite and striking images along with interesting facts discovered in the course of her work.

The panel above is the first of 6 display cabinets and features a preserved ‘perfect, six-bloomed Sweet Pea’, which was pressed between the pages of Volume 10 of the Trevelyan family albums in 1922. 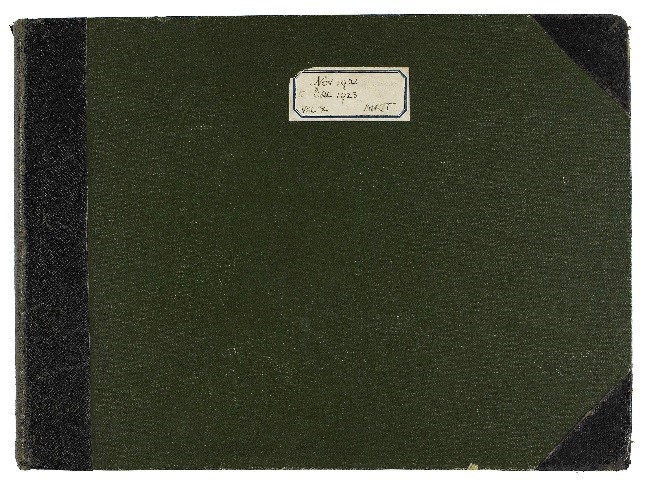 Here’s how the sweet pea stem looks in the album 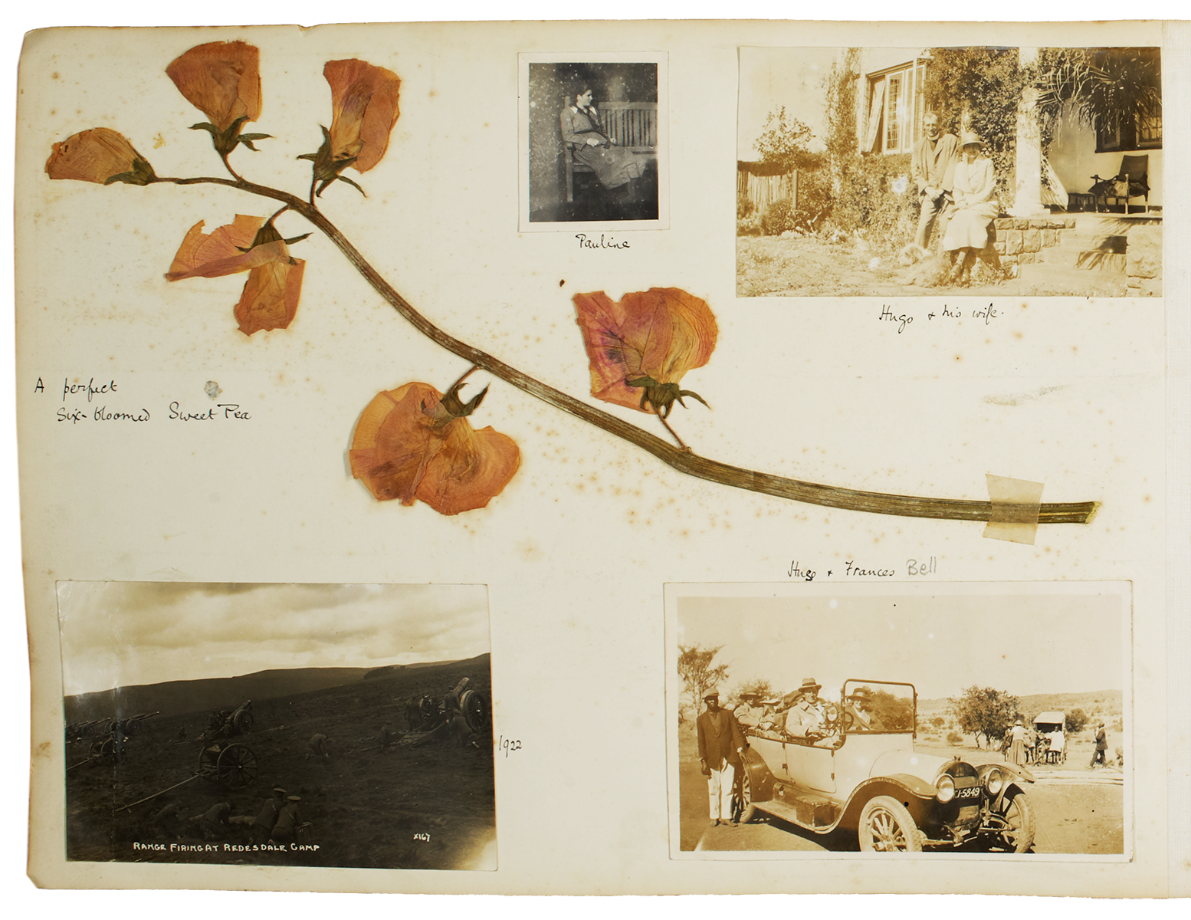 Page 49 of the same Volume (image below) contains a newspaper clipping (see left) dated November 1923 and written about a gathering at the Village Hall in Cambo to honour the outgoing needlework Exhibition Secretary, Mr. Edward Keith, on his retirement. Apart from his other talents such as wood-carving and bee-keeping, Mr. Keith was also a well-respected gardener at Wallington Hall. The article pasted into Volume 10 reads, “His work is excellent and artistic. His sweet peas are famous nationally. The Wallington garden is one of the best in our country.” 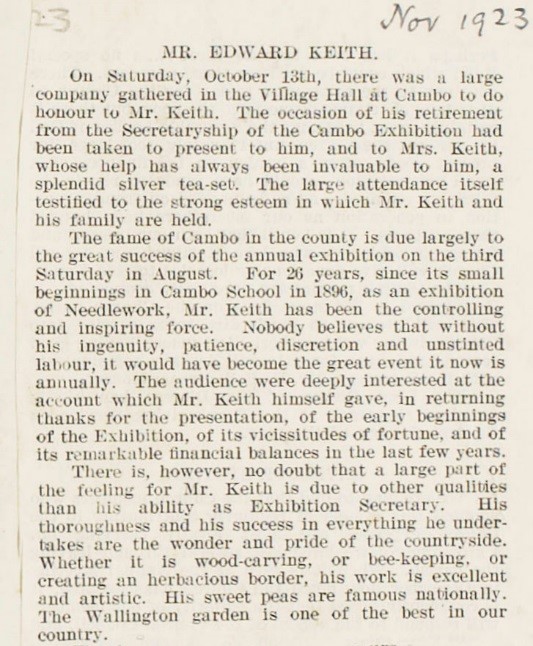 Sweet peas and the beauty of Wallington are also mentioned in ‘Wallington’ by Sir Charles Trevelyan – Its’ History and Treasures [6th ed.] published in 1950 (Edwin Clarke Local, Clarke 631).

Page 38 in the Out of Doors section in Its History and Treasures:

“In summer the place is gay with flowers. Wallington is famous for its sweet peas, and near the house they often grow in a great profusion of colour.”

Page 39 in The Garden section:

“Below may be found beds of roses, lilies, gladioli, etc, but above all sweet peas, which two generations of Wallington gardeners have made famous.”

Shew’s the Way to Wallington 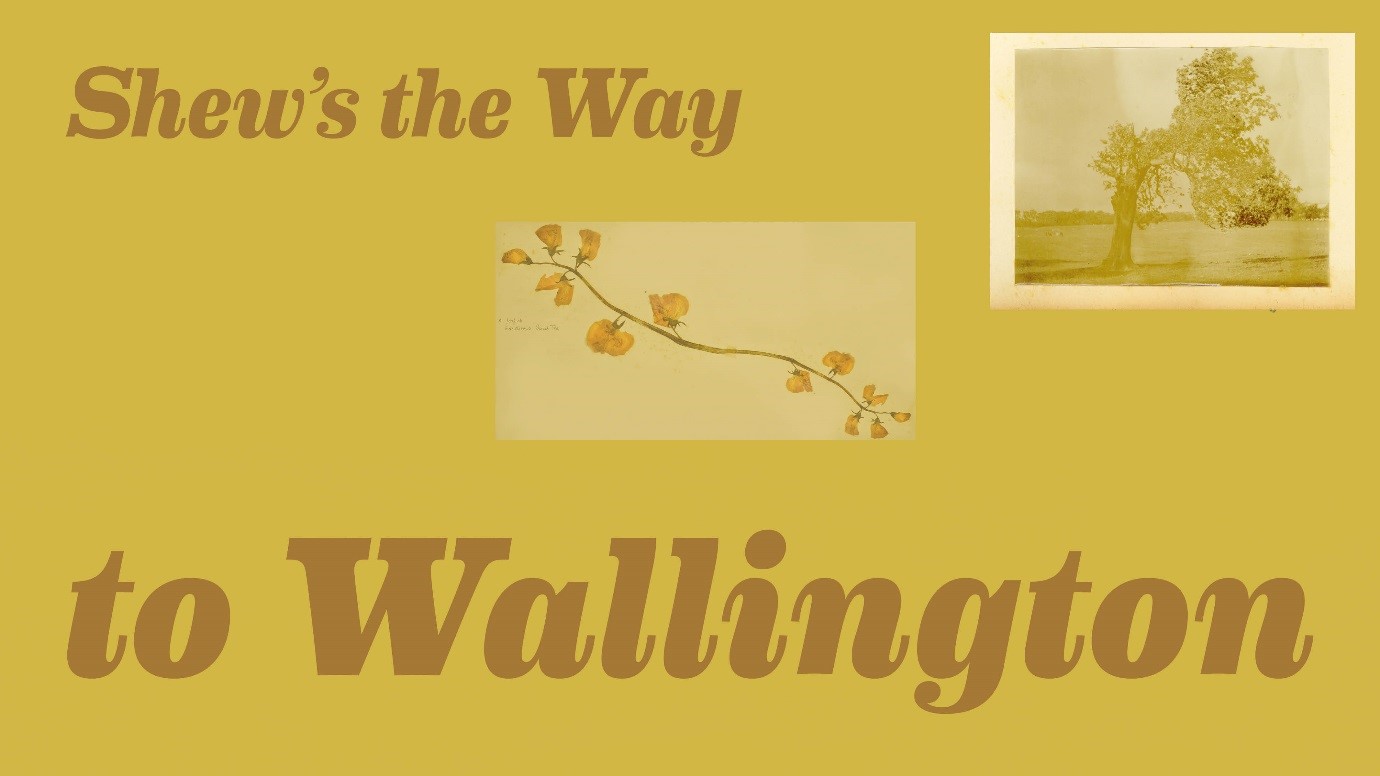 The exhibition title was inspired by a border pipe version of a tune called “Shew’s the Way to Wallington”, the manuscript of which is dated 1830, and was written by Robert Elliot Bewick, son of the famous naturalist and engraver Thomas Bewick (1753-1828).

Below are the words to the song, found on page 3 of TREV/CET/76: 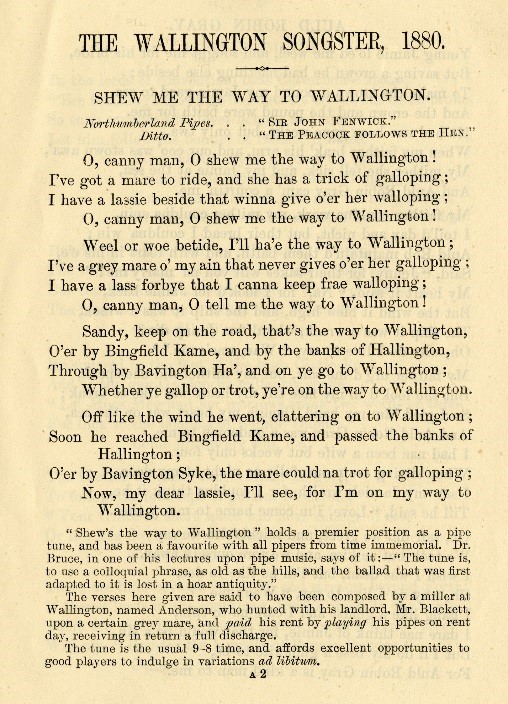