‘The characteristic appearance of no district in the world is more strikingly marked than is that of the North of England, the peculiar features of which are its collieries and their necessary adjuncts. The face of the country is thickly studded with the engine -houses and coal-heaps attached to respective pits… The fields and roads are crossed are crossed and intersected in every direction by the “waggon-ways” connecting the pits with their respective places of shipment… The margins of our noble rivers are fringed with the staiths and machinery, often constructed on a gigantic scale, necessary for effecting for effecting the shipment of the jetty treasure… The sea itself is blackened with our fleets of colliers, bearing the precious source of warmth and comfort to distant districts and countries, and thus diffusing wealth and happiness around…’.

Part of the opening remarks of M. Ross’ ‘Preliminary Essay on Coal and the Coal Trade’, in T.H. Hair’s A Series of Views of the Collieries in the Counties of Northumberland and Durham (1844). The quote from the title comes from the same.

The art of Thomas Hair provides a valuable and unique visual record of the region’s mining history. Although the landscape remains scarred by the industry, and other physical remnants of the pits have survived, much more has been lost due to the process of industrialisation and the passage of time. Hair’s work affords us a contemporary view of the pits that shaped our communities and the lives of those dependant on them.

Little is known about Hair’s life. He was born in Newcastle upon Tyne around 1810, and his working life began when he trained with local engraver and lithographer Mark Lambert. Hair moved to London at some time in the late 1830s, and exhibited his work at the Suffolk Street Gallery from 1838, and several times at the Royal Academy during the 1840s. Although based in London, Hair maintained a strong affinity with the North East and continued to produce work inspired by the region during his time in the capital. 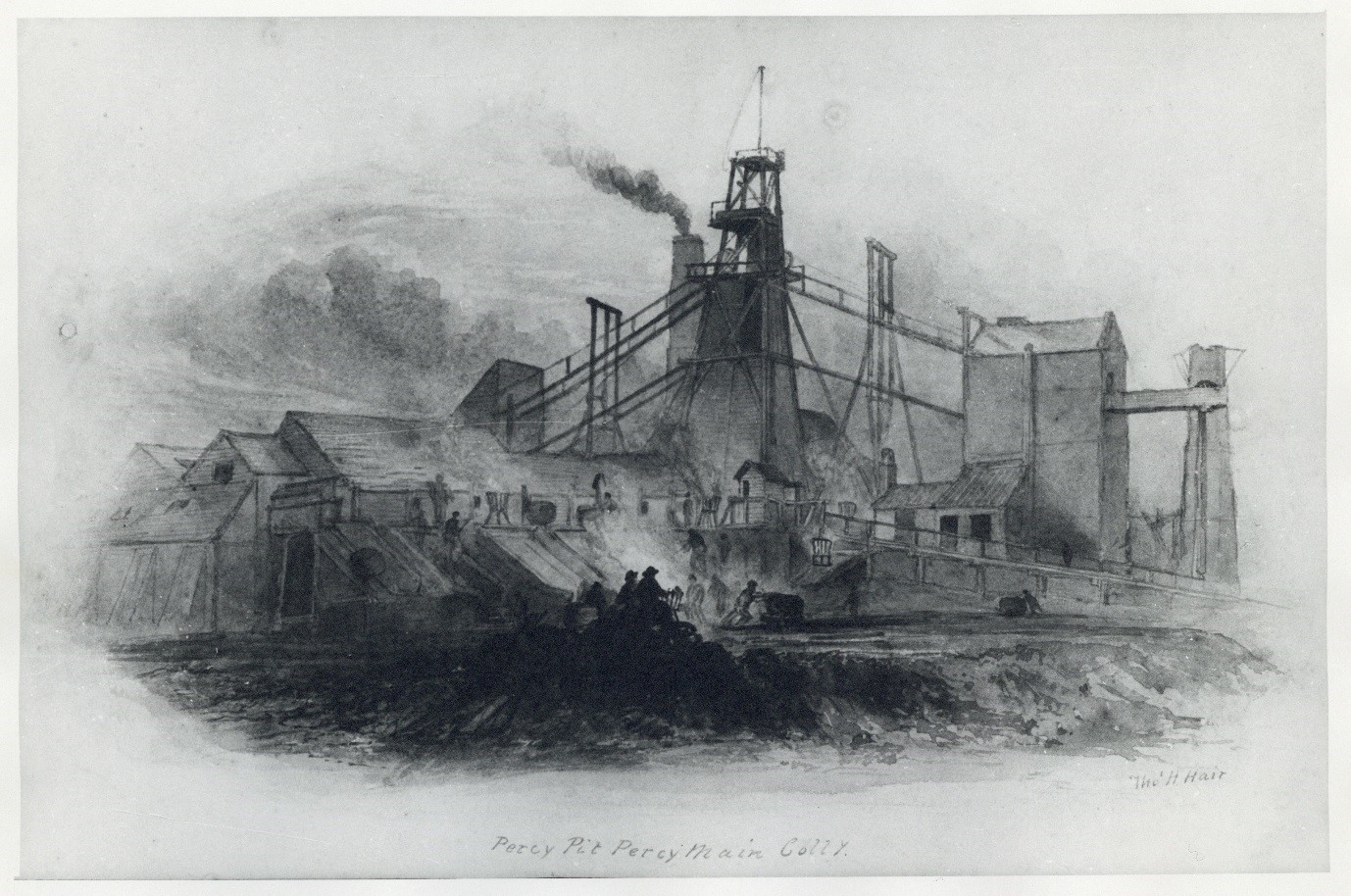 Hair travelled the ‘Great Northern Coalfield’ of Durham and Northumberland during the early nineteenth century, sketching and painting many of the different scenes of mining life. The paintings were then taken back to his studio, where they could be turned into etched engravings, either by Hair himself or another engraver he was associated with. Much of his work relating to the coalfield was published in Sketches of the Coal Mines in Northumberland and Durham; A Series of Views of the Collieries in the Counties of Northumberland and Durham, in 1844. Frank Atkinson, who wrote the ‘Preface’ to the 1969 edition of Hair’s Sketches and Views, has commented on the technical accuracy of Hair’s depictions, as well as his ability to pick up the small details that capture the essence of the scene. 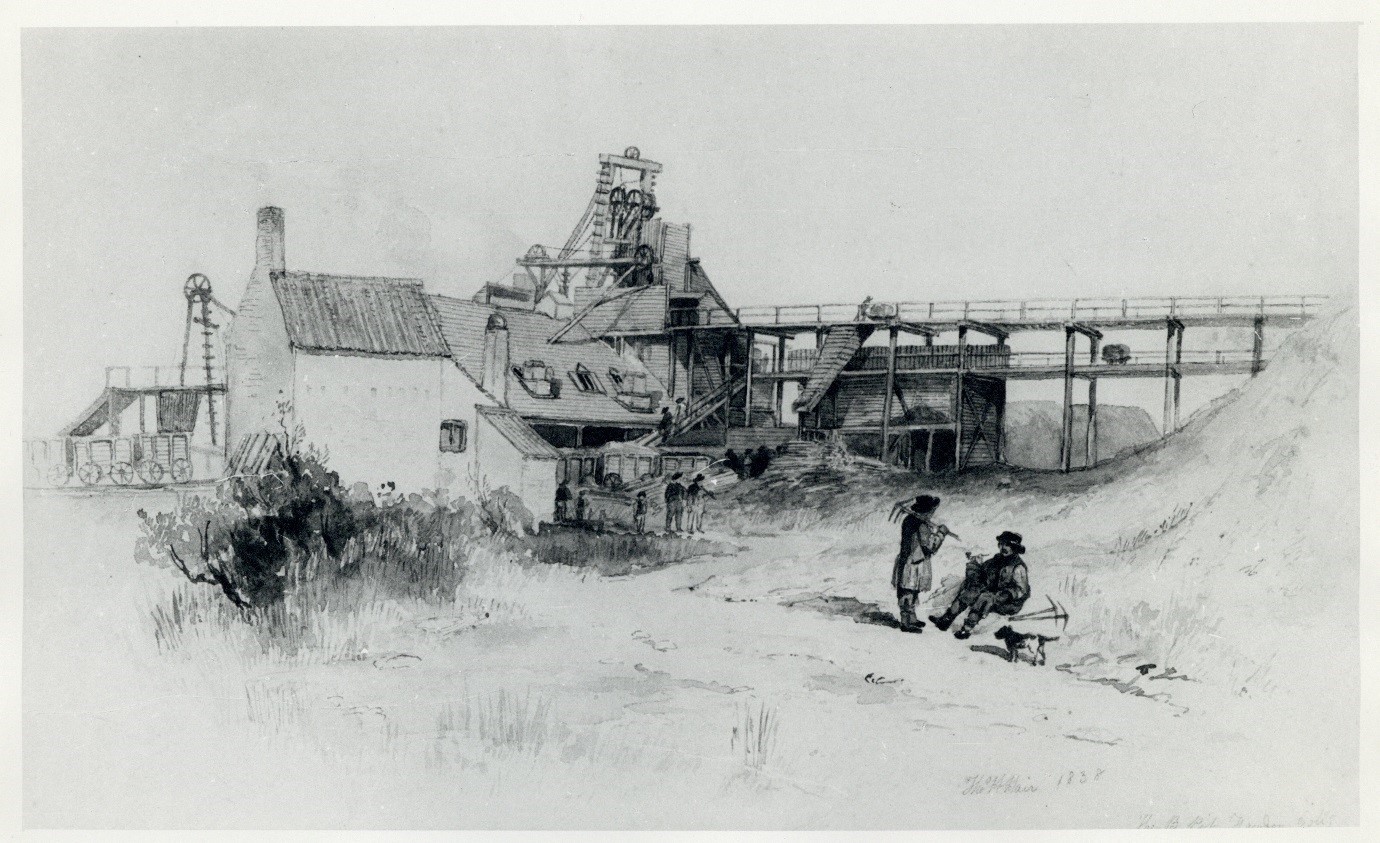 If a criticism can be made of Hair’s work, it is that it does not reflect the struggles and ‘everyday life’ of the miners and their communities. As Hair scholar Douglas Glendinning has noted, although miners are often pictured outside in Hair’s panoramic views of the pits, few of his depictions show the hazardous working conditions and danger involved in coal mining. However, Glendinning emphasises that many other artists also ignored the grim reality of the Industrial Revolution in order for their art to sell. Hair should therefore not be judged on this, and his work appreciated for the scenes it does portray. 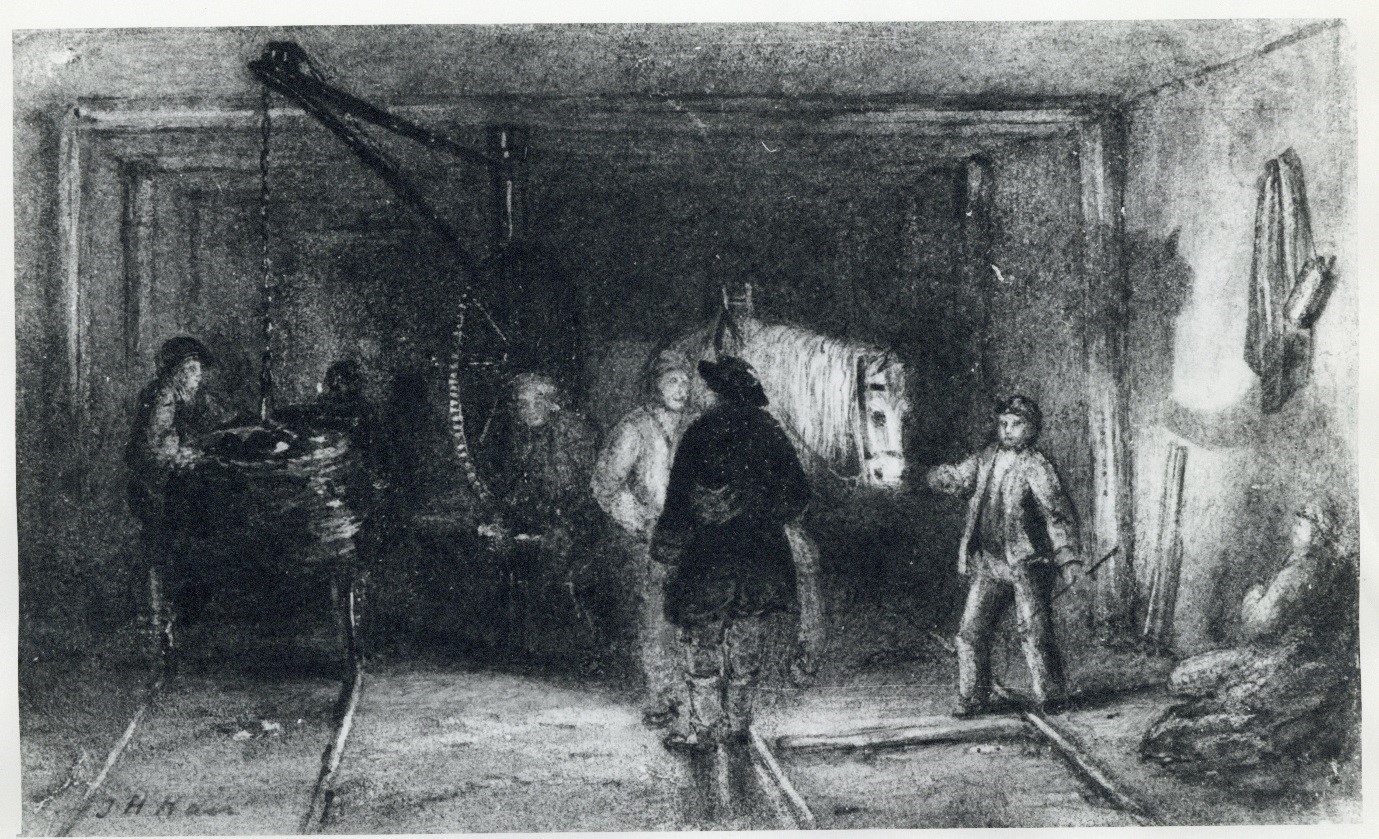 Crane for Loading the Rollies, by Thomas Hair. Date unknown. This is one of the few illustrations by Hair that shows the subterranean conditions of the pit.

Although Hair had already published his artwork in Scenes and Views, his illustrations were pirated by William Fordyce, who had produced his own survey on the region’s mining industry. Fordyce’s Coal and Iron, published in 1860, used Hair’s work extensively with no credit given to the artist. Some of the illustrations were also altered to make them accurately reflect technological advances in the industry since Hair’s time. This is most obviously seen in Fordyce’s Bottom of Pit Shaft, which is a clearly altered version of Hair’s Bottom of the Shaft, Walbottle Colliery. 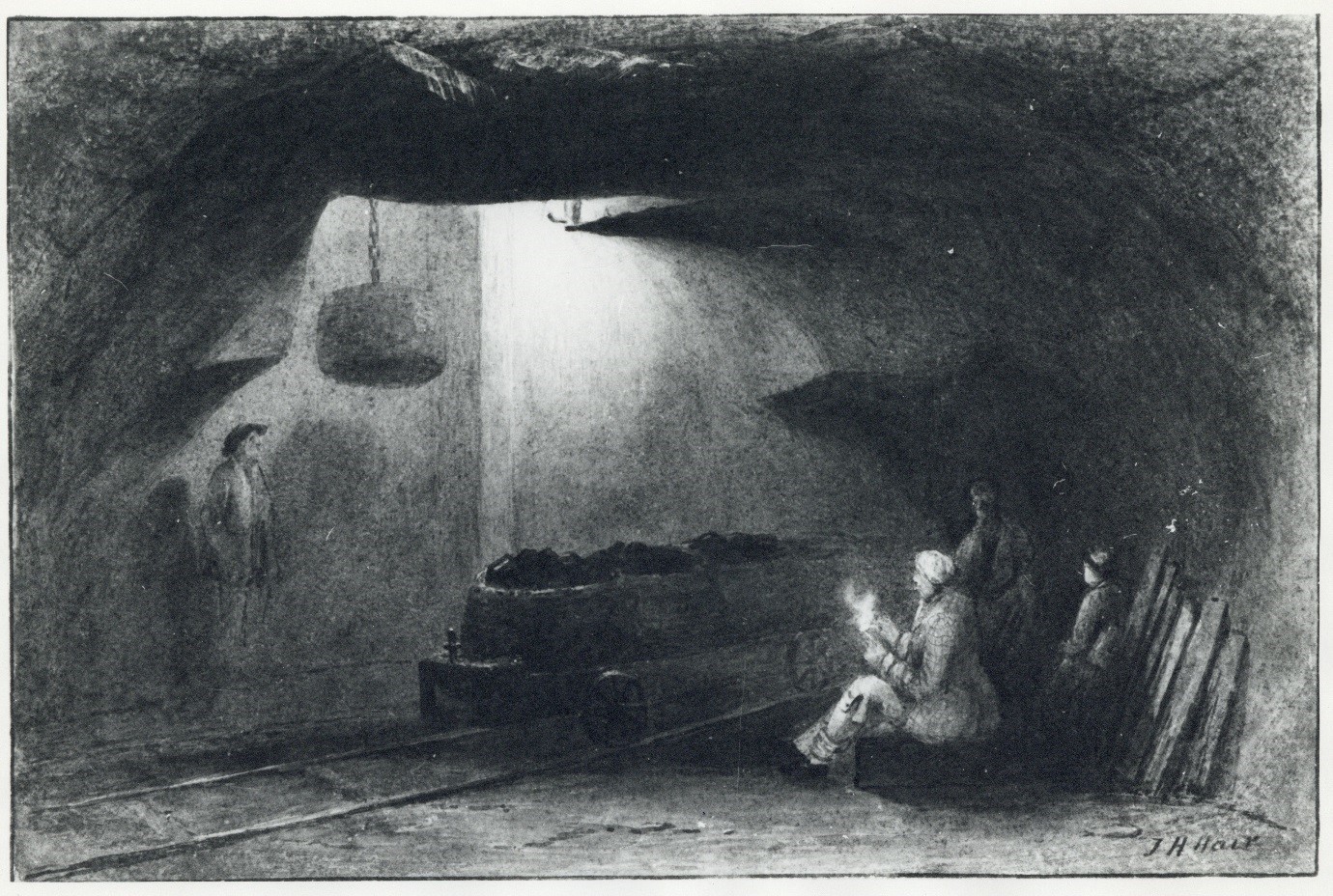 Bottom of the Shaft, Walbottle Colliery, 1844, by Thomas Hair. 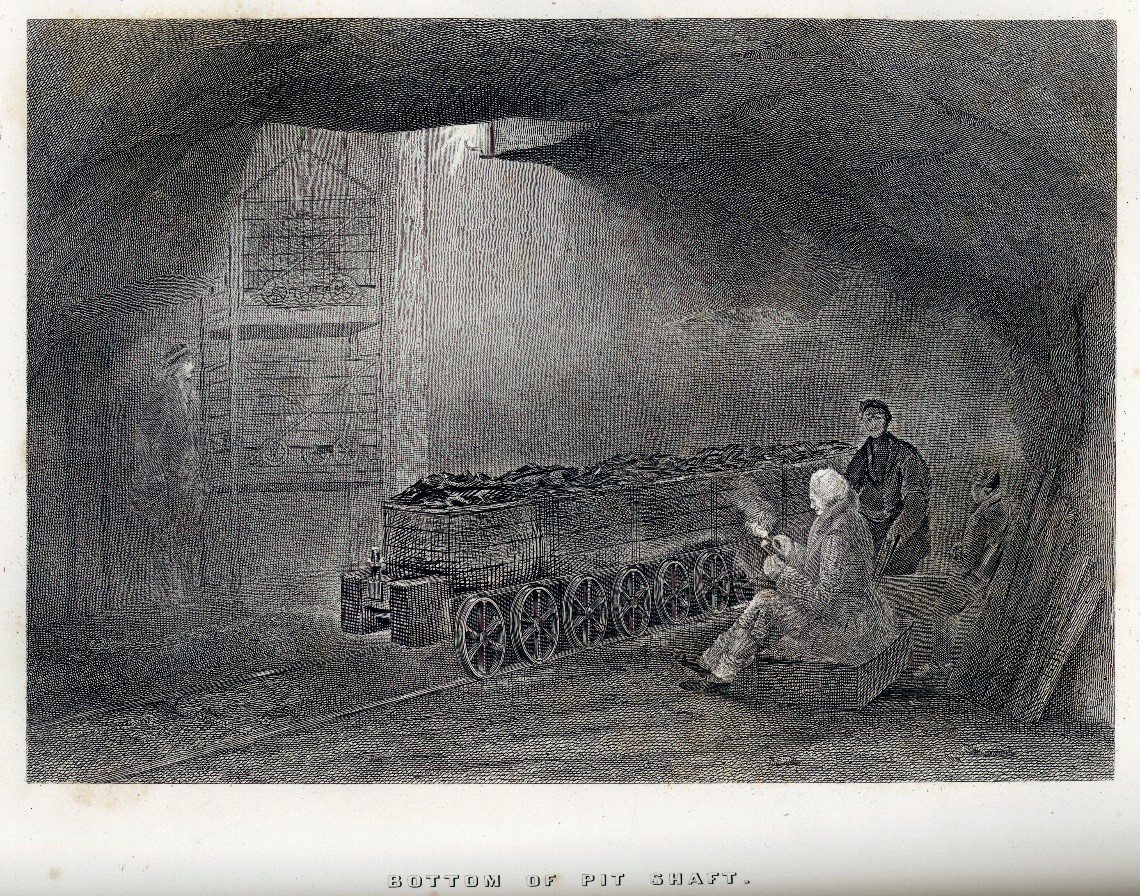 Bottom of Pit Shaft, from Fordyce’s Coal and Iron, 1860. Note the addition of a cage on the left hand side, which replaced the corves in Hair’s original. Most prominent is the removal of the rollies and their replacement with the wheeled tubs carrying coal.

Hair died in Newcastle on 11 August 1875, and was buried in an unmarked grave in All Saints Cemetery. Although we know little about the artist himself, his art gives us an invaluable insight into the ‘The Scenery of our Native North’.

The Hair Prints- Special Collections. The prints have been digitised and can be viewed on our Collections Captured portal.

The above images have been digitised from the Hair Prints and are currently uncatalogued. Please contact lib-specenq@ncl.ac.uk for further details.