In Blackberry Time was produced collaboratively by Alan Plater and Michael Chaplin.  The play is based on Sid Chaplin’s book of short stories that go by the same name.  Sid started to write the autobiographical book before his death in January 1986.  His son, Michael Chaplin, and wife, Rene Chaplin, edited and published the book on his behalf posthumously with Bloodaxe Books in 1987.

As we can see from this first page draft of the play, the narrator establishes himself as a son of a coal miner who ‘writes what I please, always writing out of daily contact with people’. Sid was highly regarded for his depictions of North East mining and working-class communities drawing upon his experiences growing up in the coal mining community of County Durham and of work in the pit. Sid began working in the mines from the age of sixteen before moving away to be a writer for the National Coal Board’s publication Coal.

With his vivid portrayals of life in region Sid was an inspiration to many North East writers.  In the 1960s he became a mentor figure to the playwright Alan Plater.  When Plater was approached by Max Roberts, the Creative Director of Live Theatre, to write a North-East play, Plater was drawn to Sid’s work. In a meeting with Michael it was decided that they would together adapt the latest of Sid’s work into a play. This extract from a typescript of In Blackberry Time was written in 1987, the same year that Sid’s final and posthumous book was published.

The play was staged at Live Theatre in 1987 and starred actors Val MacLane and David Whitaker.

In these audio interviews you can hear Michael Chaplin’s account of his collaboration with Alan Plater.  In the interview Michael claims that In Blackberry Time began his career as a writer. He has written some 30 plays for Radio 4 including the series ‘Two Pipe Problems’ and ‘The Ferryhill Philosophers’ and various single plays like ‘The Song Thief’. His work for television includes the series ‘Grafters’, ‘Dalziel and Pascoe’ and ‘Monarch of the Glen’ and films like ‘Just Henry’.

The production of In Blackberry Time was also the beginning of a long relationship with Live Theatre.  Michael wrote another two plays for the theatre, ‘You Couldn’t Make It Up’ (with Tom Chaplin) about the travails of being a Newcastle United fan, and ‘A Walk-On Part’, based on the diaries of ex-Labour MP Chris Mullin.

You can find the Archives of Michael Chaplin and Sid Chaplin here at Newcastle University Special Collections and Archives. You can also find material in our Live Theatre Archive including Max Robert’s copies of draft script for In Blackberry Time and production photographs. 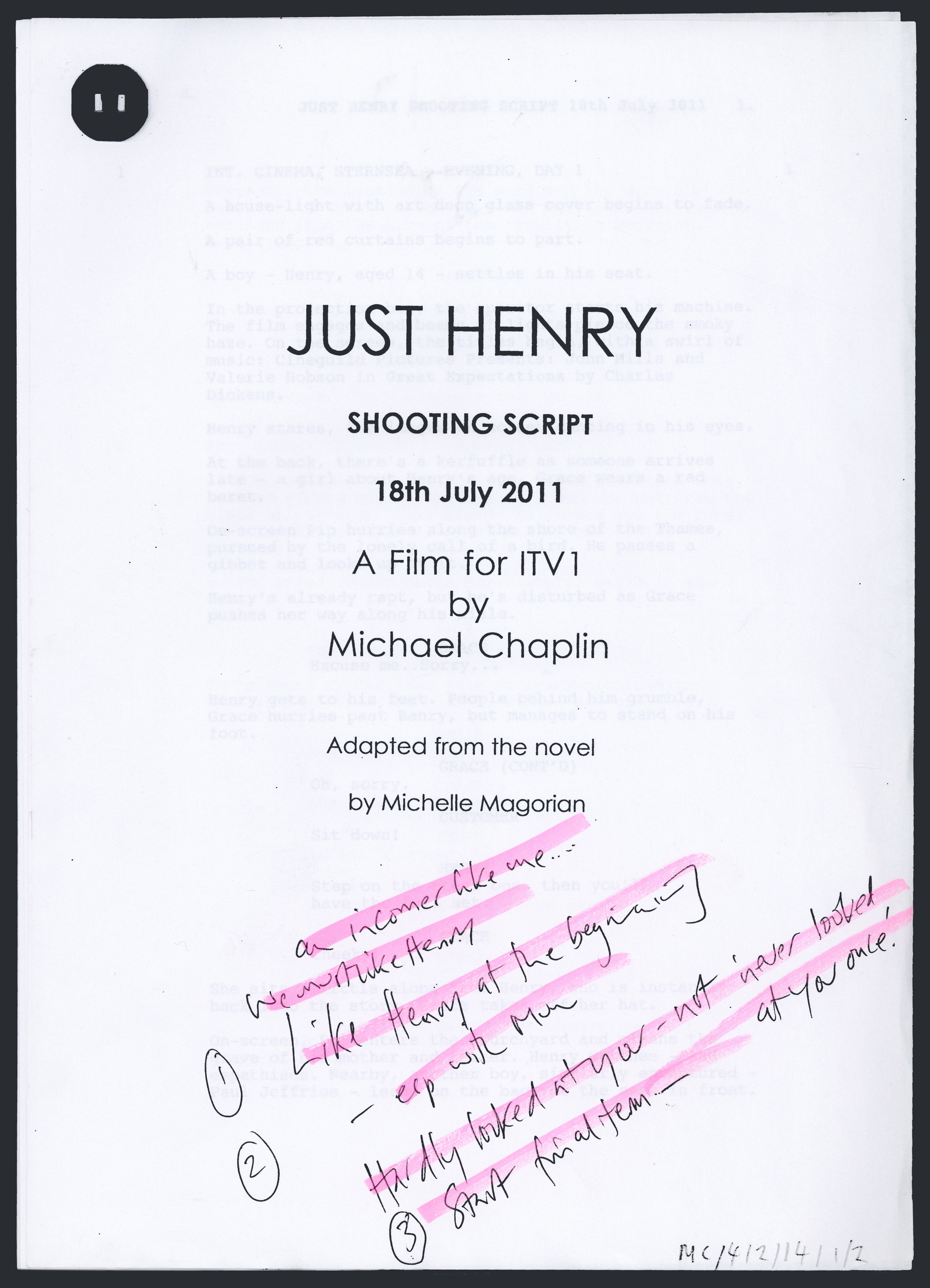 ‘Just Henry’, adapted from Michelle Magorian’s novel of the same name, was ITV’s Christmas film in 2011.

It follows the story of Henry, a young man living in post-Second World War Britain and struggling to come to terms with his father’s death and his mother’s remarriage. When his father’s medal for bravery is posted through the door, Henry decides to find out more about the circumstances of his father’s death, but his mum would rather he didn’t find out too much…

The film script was written by Michael Chaplin. Featured here is the shooting script, but researchers can view related editorial correspondence, drafts scripts and plans which can all be found in Michael Chaplin’s archive. More details on individual items within the archive can be found here.