Capital flight – in which actors with liquid assets shift them out of their country in order to earn higher returns, avoid currency depreciation and escape regulation – has been recognised as an important constraint on development prospects for decades.[1]  Before I moved from Canada to the UK, I was often dismissed and sometimes ridiculed by colleagues (millionaire physicians in particular, but not only they) for suggesting that discussions of ‘global health governance’ must not ignore capital flight and the mechanisms that facilitate it, for example by creating opportunities for tax avoidance or evasion.

Recent developments have underscored the issue’s importance.  Notably, a 2014 Chatham House report on how to finance the transition to universal health coverage that has now been endorsed as a target for the United Nations’ Sustainable Development Goals highlighted ‘[e]nsuring good tax compliance by taking steps to reduce tax avoidance and evasion, particularly by high net worth individuals, high-profit companies and transnationals’. And the September, 2019 issue of the International Monetary Fund’s quarterly Finance & Development focuses on tax avoidance, under the rubric ‘Hidden corners of the global economy’.

The magnitudes involved are staggering.  In the lead article, the acting managing director of the IMF cites an estimate of US$ 7 trillion (yes, trillion) as the amount of private wealth hidden in tax havens.  The annual tax revenue losses to governments, amounting to US$ 1 trillion on one estimate (or roughly 1.5 times the United States’ bloated military budget) are just a part of the overall loss related to such mechanisms as mispricing in cross-border trade within global production networks dominated by transnational corporations, and purchase of nationality by ultra-rich individuals (see Figure 1, a screenshot from a consulting firm that describes itself as ‘The Leader in Residence and Citizenship Planning’).  The latter process at least is entirely legal, indeed entrenched in many national ‘golden visa’ policies, and the legalities of transfer pricing remain the topic of extensive and inconclusive litigation using the limited options that are now available. 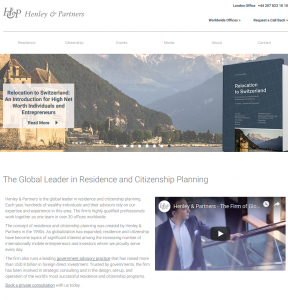 The IMF’s belated discovery of tax avoidance, and its engagement with leading researchers like Nicholas Shaxson, is therefore welcome.  Perhaps, to quote Tracy Chapman, ‘finally the tables are starting to turn’, even though this possibility requires temporary suspension of disbelief with regard to the IMF’s historic role in expanding global predatory capitalism under US leadership.  In an alternative universe, IMF conditionalities would for decades have included performance requirements related to national policies aimed at reducing tax avoidance and capital flight.

Meanwhile, public health protagonists working within national contexts where it is safe to do so (a shrinking universe) must foreground how a global economic order that enables ultra-wealthy individuals and transnational corporations to avoid tax liabilities limits the ability of well-intentioned national and sub-national governments (yes, there still are some) to reduce health inequalities, whether directly through equitable provision of health services or indirectly through poverty reduction, addressing place-related dangers, and other strategies.

Public finance is a global health issue.  This message must be communicated as widely and forcefully as possible. I am glad to provide more extensive reference lists to those interested in advancing this understanding. .

[1] For an early discussion in the Latin American context, see D. Lessard and J. Williamson, eds., Capital Flight and Third World Debt (Washington, DC: Institute for International Economics, 1987).  For a summary of later work by the leaders in research on capital flight from sub-Saharan Africa, see Boyce and Ndikumana (2012).