I have argued for many years that public finance is a public health issue.  Against the odds, this view appears to be gaining credence.  The Disease Control Priorities Project is a massive effort to identify the most ‘cost-effective’ options for improving health, funded by the Bill and Melinda Gates Foundation and organised by the World Bank.  The authors of a summary of its nine volumes of recommendations argued that ‘[i]n all likelihood, the finance ministry is the most important ministry (after health) for improving population health’.  Their argument related mainly to the options for taxing such health-destructive commodities as sugary drinks, while reducing subsidies on fossil fuels.  These are all laudable and important objectives, but we must go further.  Finance ministries are the most important ministries for improving population health – first, because they determine the budgets available to health ministries; second, because their policies determine the capacity of governments to meet health-related economic and social policy objectives (through taxation) and the distribution of the benefits of those policies (through their expenditure priorities).

In the United Kingdom, since 2010 we have witnessed an especially striking illustration of this point.  Tax and benefit policy changes have substantially reduced the incomes of those households near the bottom of the economic distribution, with minimal impact on those near the top.  Food bank use has increased sharply, and this is almost certainly only the tip of the health impact iceberg; the most deprived local authorities, which derive much of their income from central government, have been hit hardest by budget cuts and are closing libraries and preventive services like smoking cessation, even as the National Health Service simultaneously cuts back on stop-smoking prescriptions.  Indeed, the NHS as a whole is in a state of continued crisis because of government’s unwillingness to provide adequate funding from general tax revenues.  Meanwhile, corporate tax policy allows firms like Amazon to pay minimal taxes in the UK, even as their low operating costs – thanks to a perverse structure of business rates (taxes) – contributes to the destruction of high street retail.  This is likely to have at least indirect health consequences, for example as town centre dwellers whose age, abilities or finances mean they cannot hop in the car and drive to a suburban shopping park lose ‘control over destiny’. 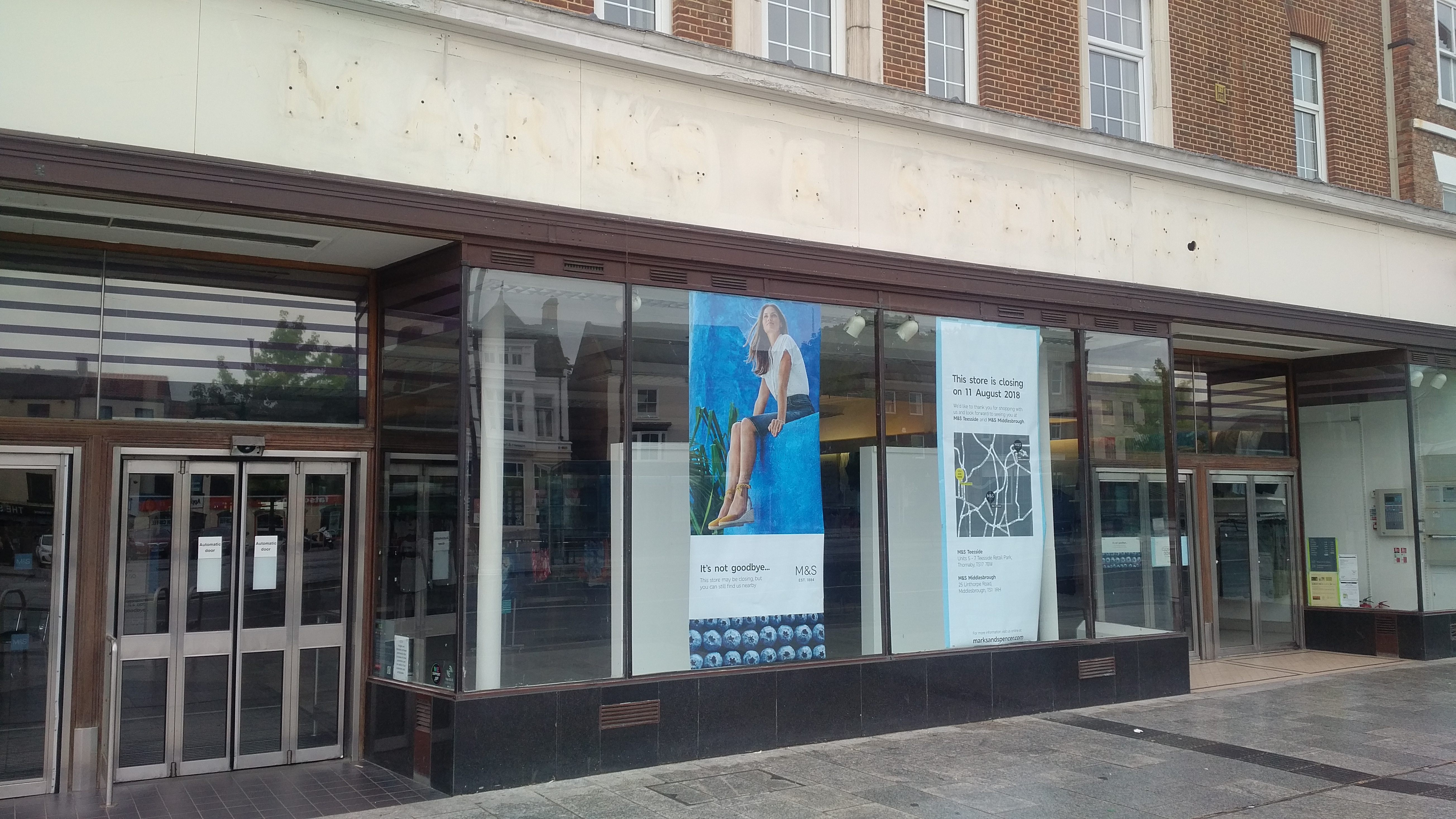 Against this background, central government continues to commit tens of billions of pounds to megaprojects like high speed intercity rail lines and foreign-built atomic power stations.  (Since this posting was written, George Monbiot has pointed out in The Guardian that a motorway from Oxford to Cambridge is likely to be added to the craziness.)  If the World Health Organization’s important message of health in all policies had been taken seriously, at the very least we would have independent, peer-reviewed health impact assessments of these expenditures, including alternative uses of the funds committed and of the ‘do nothing’ option.  Based on decades of experience with environmental impact assessments, these are essential.  Such assessments are nowhere to be found; health economists’ ritual incantation that resources are limited so priorities must be set clearly does not apply here.

All this will be familiar even to casual observers of UK politics, and has parallels elsewhere, although the public health community has too often remained silent about them.  At the same time, once-radical perspectives on the revenue side of the fiscal policy equation are moving into the mainstream of policy analysis, if not yet of politics.  In 2013, the former head of Canada’s national public service and his son published a powerful edited volume called Tax is Not a Four-letter Word, and decried Canada’s ‘dangerously distorted tax conversation’ – sadly, to little effect.  In February 2018, The Economist warned that ‘[I]f Britons want good public services’ as an alternative to the current collapse, then ‘they will need to pay more’ and hinted at the need for some form of wealth taxation.  In August, it was more explicit.  A leader noted that ‘Amazon’s British subsidiary paid £1.7m ($2.2m) in tax last year, on profits of £72 m’ – an effective tax rate of less than three percent.  The leader also foregrounded the need to tax windfall gains from rising property values ‘in big, global cities’ – which without an effective inheritance tax regime will magnify economic inequalities across generations –  and to reform corporate tax regimes to address the ability of firms like Amazon to shift their revenues to low-tax jurisdictions.  Further, it noted that ‘[a]s the labour market continues to polarize between high earners and everyone else’, with labour’s share of national income in much of the world in a decades-long decline, ‘income taxes should be low or negative for the lowest earners’.  A briefing in the same issue explores one intriguing option – a land value tax, which would capture windfall gains in prosperous areas – in considerable detail.  (Today, taxes on residential property in England and Scotland are assessed on real or hypothetical value in 1991, with a capped ‘top band’ that corresponds to just a small fraction of today’s seven- and eight-figure prices.)

Unfortunately, The Economist did not extend its analysis to such policy options as comprehensive wealth taxation or higher marginal tax rates and alternative minimum taxes on high-income individuals.  Nevertheless, its critical attention to public finance offers the possibility that ‘distorted tax conversations’ may become less so – offering prospects for reducing health inequalities by way of their essential economic substrate.  In these grim and disturbing times, we must seek faint hope where we can.

This posting appears as well on Policies for Equitable Access to Health.

The remarkable Uruguayan essayist and journalist Eduardo Galeano was a relentless dissector of what Serge Halimi of Le Monde Diplomatique has called ‘the inequality machine [that] is reshaping the planet’.  Here is an example, written about Caracas circa 1971.  Even before the 1973 quadrupling of oil prices, Venezuela’s oil production had made it one of the least poor economies in Latin America.  However, most of the revenues were extracted by transnational corporations like Exxon, Gulf Oil and Royal Dutch Shell, and what wealth remained in the country was highly concentrated.  ‘While the latest models flash like lightning down Caracas’s golden avenues’, wrote Galeano, ‘more than half a million people contemplate the wasteful extravagance of others from huts made of garbage’.  The relation between automobiles and social exclusion, both symbolically and by way of transport infrastructure choices that are literally cast in concrete, was a consistent theme in Galeano’s work.  ‘[T]he city is ruled by Mercedes-Benzes and Mustangs’, he wrote.  ‘In Caracas, enormous and expensive machines abound for producing pleasure or speed or sound or light. Like poor frightened ants we face these machines and wonder: “Jesus, is each of these really worth more than me?”’

This sounds like a rhetorical question, but decades later, it provides a useful window into twenty-first century inequalities.  At the start of this decade, the best available research suggests that the median household wealth of the UK population was around £80,000.  In other words, half of all UK households ‘were worth’ less than that.  A knowledgeable petrolhead can stand on a kerb in London, and many other major British cities, and in ten minutes or so point out numerous cars and SUVs that cost more than £80,000.  (Non-petrolhead readers who doubt this should pick up a copy of Evo or Octane at their local newsagent’s.)  So the answer to Galeano’s question, in the UK context, is clearly affirmative.  Such grounded comparisons arguably tell us more about the real world of inequality than abstractions like Gini coefficients.

Galeano’s Open Veins of Latin America appeared in English in 1973, just before the US-supported coup d’état that turned Chile into a bloody showcase for neoliberal policies.  It was a text in the undergraduate development studies course that forever transformed my provincial outlook on world affairs.  I have been re-reading his more recent Upside Down: A Primer for the Looking-Glass World, which appeared 20 years ago – and, chillingly, reminds us that a 1997 New York Times article praised the coup as beginning ‘Chile’s transformation from a backwater banana republic to the economic star of Latin America’.  The book swings between savagery and satire (on the media and Monica Lewinsky: ‘I think something else happened in 1998, but I can’t remember what’) and I find myself wondering how Galeano – who died in 2015 – would regard the era of Brexit, Trump, and a decade-long retreat from the always fragile institutions of democracy into the authoritarianism that repeatedly forced him into exile.

He noted that Saudi Arabia’s role as one of the world’s largest customers for the arms trade appeared to confer immunity from criticism of its deplorable human rights record.  Plus ça change … Already, Galeano was concerned about the spread of surveillance. ‘Is there an eye hidden in the TV remote control?  Ears listening from the ashtray?’ What would he make of Alexa?  Or of the fact that it is possible to access detailed personal information about almost 300,000 people (contacts of contacts) through a single Facebook account, as the New York Times has shown, and few users seem to care?

Galeano memorably described globalisation as ‘a magic galleon that spirits factories away to poor countries’, noting that the resulting ‘[f]ear of unemployment allows a mockery to be made of labour rights.  The eight-hour day no longer belongs to the realm of law but to literature, where it shines among other works of surrealist poetry,’ as ‘the fruits of two centuries of labour struggles get raffled off before you can say good-bye’.  Here is one of several sobering reminders that key understandings of how the inequality machine operates were in place two decades (or more) ago; many social scientific advances since then involve refinement and body counting.

Galeano was similarly eloquent about  the dangers of finance capitalism, as it shifted power and accountability towards ‘the markets’ that often dictate terms to national governments, and spawned a proliferation of tax havens and obliging facilitators seeking to protect kleptocrats’ looted billions.  How would he now regard the revelations in the Panama Papers and Paradise Papers?  Or look back on the financial crisis starting in 2007 that turned into a US$14 trillion hostage taking that debilitated many national economies, ratcheted up inequality and created the political opening for the destructive post-2010 trajectory of UK austerity?  Galeano correctly notes that Margaret Thatcher ‘ran a dictatorship of finance capital in the British Isles’; this was the start of a rapid rise in inequality … but what would he make of Danny Dorling’s recent argument that the situation worsened on New Labour’s watch?  And how would he respond to an inequality in male life expectancy at birth in the small local authority of Stockton-on-Tees, where I live, that by 2015 was comparable to the difference in national averages between England and Tanzania?  This is another one of those important grounded comparisons. 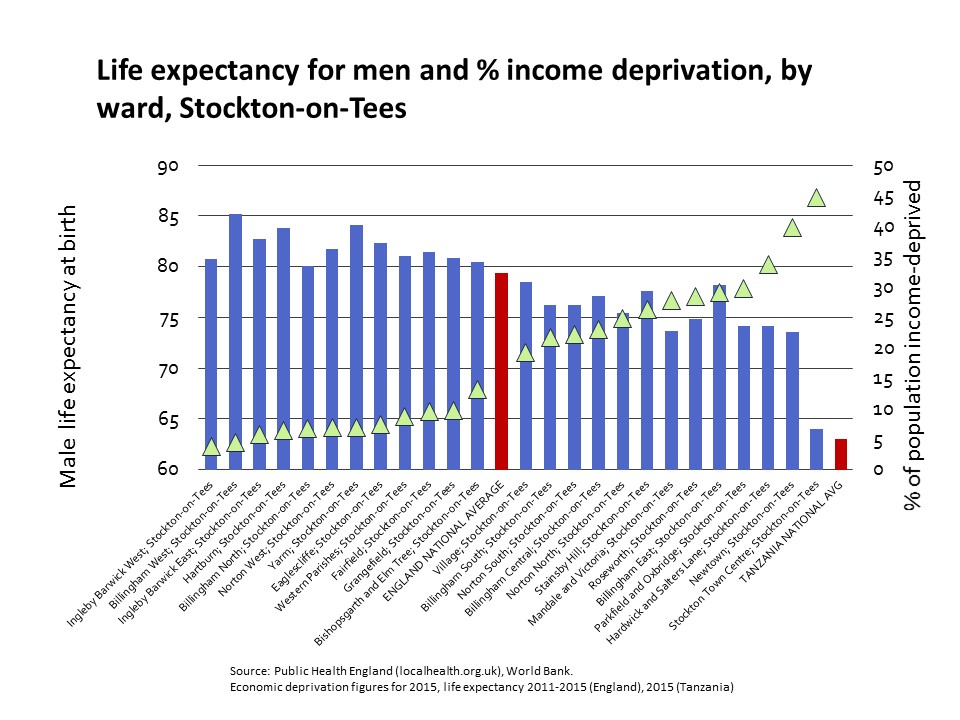 The World Health Organization’s Commission on Social Determinants of Health reminded us a decade ago that health inequalities are underpinned by ‘the inequitable distribution of power, money and resources’.  Reducing those inequalities first of all demands speaking truth about power.  Galeano excelled at this, sometimes at considerable cost to his own safety; scathing description of the impunity enjoyed by the powerful was a consistent theme in his writing about Latin America, both during periods of dictatorship and after transitions to democracy.  He might have been pleased by today’s partly successful challenges to the massively corrupt Odebrecht combine , while simultaneously appalled by the failure to act on the continuing scandal of tax havens and by the alliance of big data and big money in the dissemination of disinformation and ‘fake news’ through social media.  This is a new form of coup d’état that social scientists are still learning to take seriously.

In these times of cynicism and resignation, the example of Eduardo Galeano’s courage and moral imagination is more valuable than ever.