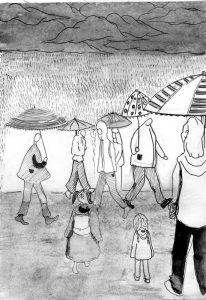 “Off me clean sheets, you little divils!  I’ll tell your mam, mind! I will!”

We’d been in the back lane, me and my little brother Neil, running in and out of the sheets hanging on the line. Old Mrs Kennedy had appeared at the top of her back stairs, shouting at us over her wall. We dodged inside our yard.

“We’ll have to put it somewhere they won’t look.”  Neil’s voice was quiet.

I could see him biting his lip.  I was sorry I’d lost my temper with him.

“Under the shed at the allotment?” he suggested.

“Mam might look there. She was talking about letting Mr Pringle have it, so she’s bound to check before she gives it to him.”

“She’s always in there to check how much money the Board’ll want off her at the end of the month.  Anyway, Dad said never to touch that.  It’s electricity.  We could get killed.”

Neil chewed his nails.  He did it a lot, especially when he was thinking.

“In the outside bog?  In the thing on top with the lid that lifts off.  Nobody ever uses it except us.”

I thought.  Since the new bathroom got built on to the old scullery, he was right – nobody ever used the outside bog, and now, nobody was thinking about getting rid of it either.  Mam had too much to think about, what with her new job and everything.  “It’s got water in it, though.”

I nodded.  He was learning.

“We’d have to make sure nobody sees us hiding it,” I said.

He could.  Nobody expects little kids to behave like other people.  And they always want to pee, and if Mam saw him go in the bog from the kitchen window, she’d just be glad he wasn’t doing it in the back lane.

He took the bag off me.

“Under your jumper, stupid!”

The next day it was raining hard, so we had to stay in the classroom for playtime.  We were supposed to be reading or making models out of Plasticine, but somebody started talking and after that it just got louder and louder.

I hate our new classroom. It’s cold, and sometimes the roof leaks. There’s glass on both sides, so anybody passing in the corridor can see in, and it smells of scruffy kids and disinfectant and sour milk. Sometimes I look out the window into the yard, and it’s got nowt in it except targets painted on the brick walls for PE classes.  We hoy balls and beanbags at them.  The walls are high as well.  We say it’s to stop kids getting out.

In the old class, I used to really like Art, and some of my pictures were stuck on sugar-paper on the board round the back of the classroom.  But now, since we got Miss Harper, I’ve stopped trying so hard.  She had a go at me for covering a picture with black raindrops.  We don’t see much black paint, so I wanted to make the most of it – but she didn’t like it, and now I don’t bother much with Art.

“Steven Turnbull, trust you to spoil a nice picture.”

It was how she said it, as if I never did anything right.

Mr Martin would’ve said something nice about it.  Neil gets him in a couple of years, but by that time I’ll be in the big school.

Harper came back into the classroom and we all stood up and shut up.  She has that effect on people. She’s tall and wrinkly, and she has pale eyes that look through you, not at you, and she only likes the good kids, the ones that do what they’re told and understand her without her having to explain things. All she wants to do with the rest of us is make us look stupid and slap us around.

“Books away, please.  Susan, collect the Plasticine in.”

Susan Ramshaw, one of the class monitors, came to squash the Plasticine back into the empty margarine tubs.  We’ve got three colours, brown, green and blue.  The brown is red and green that got mixed by mistake: Thomas Drake got hit with a ruler for doing that.

In Mrs Gregory’s class, I made a green dragon, and me and Dad went to Felling Fair to see it on display.  I had to cut flames out of a Fry’s Turkish Delight wrapper for its nose.

“Arithmetic books out, please.  Steven Turnbull, stop dreaming and look at the board.”

It’s always me she picks on.

Harper likes arithmetic.  Bloody boring sums, “problems”, she calls them. So many apples and so many pears and so much money.

Sometimes, I think: if you pick on one kid ten times between ten-thirty and twelve o’clock, and make him come to the front to do a sum on the board he can’t do, and slap him, and tell him he’s a stupid boy twice, what do you get?

Trouble, that’s what you get.  Something nasty you didn’t expect.

This week, we are going to introduce a new author every day with examples or extracts of their work as it appears in the anthology Bridges. Today we introduce an extract from an engaging story written by Rhona Tolchard.

She is a mature student who did my first degree at Newcastle.  She is interested in all kinds of prose writing, and her ideas for stories often come from biographies or histories. Additionally, her fiction often overlaps with other subject areas – here, the non-violence theology of the Civil Rights movement in the late 1960s. When writing about fictional characters, she is usually trying to explore an idea for herself, so there is always a subtext. The influence of David Almond, a Tyneside writer, can be seen in the style and setting of this story.