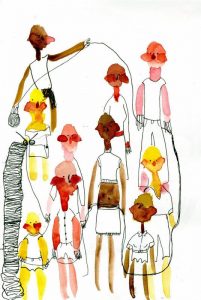 There is a woman in this town who’s my double. I’m not saying it this way round in vanity. It’s just I’m slightly older. We have the same kind of hair and skin. We dress similarly. It’s a natural look. Nothing too shiny. Sometimes I’ll be walking through the supermarket or past the bank, and someone will call Becky from behind me. When I turn I see something in that person’s expression that tells me I have let them down in some way by not being her. It’s not deliberate, but I still feel disappointed in myself. I wonder how often people call out my name behind Becky and then look crestfallen when she fails them. Occasionally I will be in the same place at the same time as Becky, like at the cinema, and I look at what she is wearing and how she arranges her body in her seat. I try to conceal from her that I am doing this in case she thinks I am engaged in a project to be as much like her as possible. I’m curious, that’s all. OK, I’m attracted to her. One day I find out that a friend of mine knows Becky quite well. She tells me that Becky goes to AA meetings, and that she is a bit slimmer than me. The next time I see Becky I notice her slenderness. She has a small dog. I’m not saying I plan to keep a dog but if that changes, it would be a small one I’d be interested in. Over the next few days I decide I am a heavy drinker, and think about all the sugar in wine. Then I stop drinking. I sometimes wonder what Becky has had to lay down for me.

Vanessa Lampert is an acupuncturist in Oxfordshire. She has two adult children who have taken some Le Creuset pans with them and possibly a really nice cardigan and a newish electric screwdriver. She has been published in The Interpreter’s House and Highly Commended in the Bridport Prize. She is a second year on The Poetry School London’s MA programme and enjoys knitting whilst in front of the TV and is excited about the concept of wild swimming on paper. It’s just the cold.