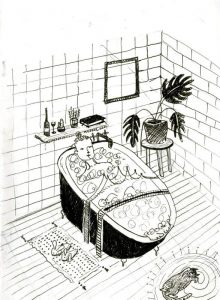 Once Upon a Time, There Was a Book

You should stop. You should stop right there, right now, turn around and head back to work. You promised you wouldn’t do this again. You promised your mom, you promised your dad, you swore up and down to Doctor Dewey that you wouldn’t give in to this temptation ever again. But even as you try to convince yourself to turn back, to take the second left and then the third right and be on time for your shift in the coffee shop, your feet refuse to listen. Doctor Dewey warned you about this, before she signed your release forms, all these years ago. That there would be days when the urge would seize you once more, and that you would have to resist it. She still mentions it in your bi-monthly sessions. She says that it wouldn’t help, that it would do more harm than good, and set your recovery back years with nothing to show for it.

Sometimes, you wonder if Doctor Dewey was one of you. You’ve never seen her at any of the support group meetings, but then again your group is mostly composed of people your own age. So it’s possible. But you never asked, and you never will.

You should call her, you think. Or call your mentor, at least. It’s been seven years now. You’ve been doing better lately. You even managed to hold down a job for more than a few weeks! You should be over this by now. But you’re not. You’re not, and that’s the problem, isn’t it, because your feet are still moving, dragging you along while you dither, straight ahead and then the first right and the third left, and there it is, just as you remember it. The old stone walls and the sparsely decorated window, two leather-bound books closed by flaps laying on red velvet, looking strangely lonely in the middle of the display, the medieval sign still hanging proudly above the door.

Your right hand clenches around the keyring in your pocket, feels for the charm you received last session to commemorate your fifth year outside of the institute. You can’t afford to ruin everything that you’ve managed to build since then, but… just a look won’t hurt, will it? You’re already here, after all. You’ll just go in, have a look around, and then leave. Head back to work, apologize to your manager and start taking orders. Safe, secure routine. And tomorrow, at the next support group meeting, maybe the others will be able to give you advice on how to deal with these urges next time? Of course, they will, yes, many of them have been dealing with this for far longer than you. Just one look around, and then you’ll leave. You can do that. Even if you haven’t been back here in seven years, even if you haven’t been in any bookstore or library on your own since your return. You can do this. You take a deep breath, cross the road and push the door.

The full story can be found in the upcoming students’ anthology Bridges, that was conceived, designed and edited by Sixtine Duviesart. She is a Belgian-Luxembourgish national with a passion for children’s literature and legends. She has finished a Creative Writing MA at the University of Newcastle this year. Currently unpublished, save for one short story in French, which appeared in a university newspaper in 2015, Sixtine is currently working on a children’s book based on a Luxembourgish legend that she hopes to turn into a series.