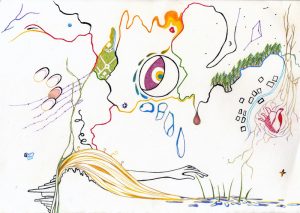 Pathetic Fallacy, or Something

Ted leans back in his chair and closes his eyes, trying to block out the chatter and footsteps around him. He slips a hand into his pocket and feels his shoulders relax at the weight of metal in his palm, the feel of the engraved surface underneath his fingertips grounding him. He glances at the clock in the corner of his screen, knowing that Jason has set the sole analogue clock on their floor ten minutes late. Fifteen minutes until he can get out of this dump and back to his shoebox apartment on the outskirts of the city. Ted checks the display screen of his phone before tossing it back down; no messages or missed calls.

“Got somewhere to be, Teddy?”

He looks at Anna as she waits for her photocopies, her fire-engine red nails trailing along her necklace. She smirks when she sees him follow her movements, pulling the end of the chain out from underneath her low-cut blouse. Ted rolls his eyes and ignores her.

Ted was never supposed to end up in a dead-end nine-to-five, wearing discounted suits and ties that match his socks. He would have considered forgiving himself the hypocrisy of working for what his teenaged self-referred to as ‘The Man’ if it meant an impressive salary and some form of accomplishment, but Ted has neither. Shit, he would have settled for just one.

The workplace is nothing fancy. Three open planned floors painted in the kind of bland colours that bleed together to make a single shade of mediocrity, the carpet old and worn with matted fibres. The barriers between the desks do nothing but create a charade of privacy; a reliable surface for Anna to lean on when she makes her hourly gossip run, or something to shield Alan from Ted’s glare as he taps his pen on his desk in sets of four, never managing to stay on beat.

Ted started playing the drums when he was a teenager. He’d spent hours in his bedroom stomping pedals, tapping cymbals and trying to perfect a rimshot while his homemade soundproofing did nothing to muffle his artistic struggle. He was going to be a musician when he left school: jazz, rock, metal, it didn’t matter as long as he spent his nights neck deep in drugs and balls deep in groupies, with all the cash and glory he could get his hands on.

With his future fame and fortune in mind, Ted had persevered through the scowls of the miserable old hag next door and exasperated sighs of his parents. He put his homework on the back burner and committed himself to challenging his lack of rhythm and shitty hand-eye co-ordination. Ted refused to go into further education after graduating high school, reminding his parents that they always told him ‘practise makes perfect’, and that music was a natural talent, not something that could be taught in a classroom. He didn’t need a back-up choice, like a business degree or knowledge of how to make a car run smoothly. If it wasn’t music, Ted wanted no part in it.

Alan had never played an instrument if his tapping was anything to go by. Teenaged Ted would have flung his stapler over the partition, told Alan to shut the hell up at the very least. Instead, Ted sighs and shuts down his computer.

“Liv?” Ted kicks his shoes off and makes his way down the narrow hall of his flat. “Liv, are you home?”

“In here,” the accented voice calls back, “stop shouting.”

Making his way to the bedroom, Ted stops short.

“What are you doing?” he asks, taking in the clothes littered over the green bedspread and laminated floor. Nobody had ever accused Liv of being tidy. “What the fuck is this? I’ve been trying to get hold of you all day.”

“Yeah,” she pauses, flicking her fringe out of her eyes with a jerk of her head. “I noticed. The ringing was driving me nuts, so I put it on silent.” Her methodical movements continue; picking up a jumper, folding it, placing it flat in a large suitcase.

“You’ll never fit all your shit in those…” Ted feels his heartbeat quicken, hears it pounding against his eardrums at a speed he never came close to attaining with his sticks. He realises that he should probably be feeling as frantic as his pulse, but all he can think is that Liv only has two large suitcases and a shit tonne of shoes.

She avoids his eyes, distracting herself with the yet-to-be-folded items.

“I’m going back to South Africa,” her voice is timid, but not watery. “I’ve been thinking about it for a while.”

Chloe Bent is an aspiring novelist from London, with a passion for short stories of multiple genres, and enjoys exploring the uglier parts of the human experience and mind in her reading and writing. She’s fond of morally bankrupt characters, lots of internalisation, and going on real and imaginary adventures. She’s frequently asked by her mother why she can’t “just write happy stories.” Chloe has graduated this year (MA in Creative Writing). This is an extract from a short story, published in the anthology Bridges.