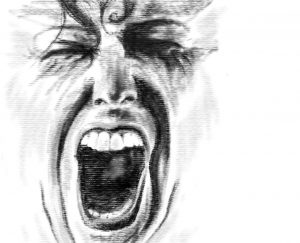 You sit. You look. It is a quiet place. It is not your place. Screaming faces in the paintings on the walls replicate the scream you hear inside you, the rage that runs through you every time someone suggests that being a writer is your own selfishness, self-indulgence, that equates to being a bad mother and a wife. I know that is not what Francis Bacon meant when he created his images but that is how I feel.

Homer was a poet and a story-teller. For it, he was worshipped as deity, so were his successors. Across centuries, folk story-tellers meant that the memory of the peoples remained preserved.

Stories, words are so much more than self-indulgence, they are the beginning and the end of everything, the ideas we need to formulate in our heads, news on TV, soap operas, articles that we read and make us go ‘Agh!’, or ‘Oh, no!’; adverts that sell products through a story, sometimes only loosely associated with the subject, but it makes us salivate, makes us want more. Who can resist a bank card that can ensure your family’s happiness? How can a woman say ‘no’ to a lipstick that makes her as beautiful as Aphrodite?

Imagine if the world as we know it, finished today. What would you do? What would become of all the ‘useful’ IT managers and business graduates, overpaid high-fliers with vague job descriptions? You would make a fire, you would build a shelter, you would prepare your meal and then lie down in darkness, listening to rain drumming on the roof of leaves and twigs. You need stories. You also need music, dance around the camp fire. You need to laugh, you need to find a cave to paint a picture. There would be no need for shareholders, capital gains or bonuses. It is who we are, it is our soul, the essence of our existence? For if you forbid people from telling stories, they lose their sanity. They lose their history if their stories are not passed on. And with it, their ability to comprehend the world they live in wanes. The meaning of our being will be gone.

One can only take a look at the people who suffer from mental health issues, people traumatised by war experiences, and how they respond, how they get better through taking up a ballet class or life painting class, through being encouraged to write a journal, think of a verse that expresses their pain. Shrouded in mystery of who we are as entities, as animals, what is our brain, why does it need to be creative, why does it suffer when it is not? The healing begins.

Recently, I have watched one of the TEDx talks on You Tube. Sir Ken Robinson asked if schools kill creativity. I was shocked but not entirely surprised to hear that a five-year-old is forty-nine times more creative than an eighteen-year-old. So the question is not how do we learn creativity but how do we stop unlearning it? Based on this evidence, it appears that we are already born with creative brains but the educational system perceives it as threatening, squeezes it out of us, sidelines creativity in favour of memorizing timetables. You draw a person in uneven lines, the grass is purple and the sun green. You are told that this is not how the world looks like. You feel guilty and ashamed of not conforming to the idea of the world.  This explains why a six-year old will start telling their parents why they cannot draw any more although they were perfectly able to express themselves in that way only several months previously. Eliminating the creative self thus equals an institutionalised act of self-harm.

Creating is breathing, it is being but when practised well, it also becomes craft. We are craftspeople. The technical skill behind any successful creative act cannot be underestimated. It is not an easy job for it takes a daily practice to master.

We accept that it takes many years of training for a gifted athlete to win Wimbledon; we accept that a bright person has to study and work hard to become a heart surgeon, so why is it so difficult to accept that the same is true for poets, writers, painters or other artists? Why do we think that there is some magical device, like a sort of Nuremberg Funnel that enables art to happen? You somehow conjure the results out of thin air, without any effort or time?

Maybe we can blame the Byrons, Baudelairs and Rimbauds of this world, absinthe drinking van Gogh and Manet, the pop stars in the infamous 27 Club, meteorites with wild ways and insane talent that shone briefly before crash-landing with fatal consequences. We can blame even the likes of Katie Price who is credited for writing several books although it is known that her ghost writer pens the stories, she lands the brand name of a TV personality to shift the copies.

Creative people need to spend hours and days in solitude, working on their pieces, chiselling every word, every stroke of their brush. But that’s not what general public sees, or perhaps even wants. They notice a self-promoting media star who spends days fashion shopping and self-pampering whilst somehow also remotely and telepathically creating all these bestselling books. How difficult can writing be, right? Because anyone can write. If it so easy, why should anyone be paid for it?

The myth of an artist. No one wants to hear of a married woman with a house, a husband and two children, who does not drink, does not smoke and does not take drugs, who is, in fact very boring and ordinary, who however sits at her desk, works relentlessly on her stories, in constant search for the right words and expressions. She gets up at five in the morning to iron her kids’ school uniforms and her husband’s shirt. She makes porridge. She makes sandwiches for lunch. She puts a washing machine on. She hoovers. After school run, she sits and writes until it is time to think of cooking the evening meal and pick up the kids again. By eight the kids are in bed. By eight thirty she is falling asleep on the sofa. She has not stopped for thirteen hours. She is not glamorous. Or beautiful. Or seductive. Or hedonistic. She lives in her head, with her stories, obsessing about getting the words right. But that is not the portrait of an artist the public want to see.

Why do you need to be attracted to the perceived personality of an artist? Shouldn’t the artist’s work be enough? Surely, if I thought I am such an interesting person, I would have written an autobiography. Instead, I collect stories of other people, like a magpie, picking the best and most shining jewels I can see. I display them but I am not one of them. I am the greedy bird, I am the observer in the corner.

I retreat in my inner space, scream inside my head and splay myself across the pages. Is this self-indulgent? Why do people have the need to judge it, label it, dismiss it, put me down for who I am? Why do they take the time and energy to make me feel guilty? Would my story-telling be justified if I also worked in the local Co-op or cleaned toilets for living? Would I be seen as more deserving, a martyr of art, whose self-sacrifice has earned her the right to write? What do they know about the life I have lived, things I have done, jobs I have held? Time to accept that is who I am. And time for the others to accept me for who I am.

Natalie Nera is a pen name of Natalie Dunn, a Northumberland based Czech writer. She is the author of two published novels and editor and co-author of a poetry anthology in her mother tongue.  She writes in Czech, English and occasionally translates. Her written work has appeared in Czech, Russian, German, English and Romanian. She has had her work featured in various anthologies, Mslexia and BBC Radio Gloucestershire. She is a co-founder and former editor of the literary blog Bridges at the Newcastle University. She has recently launched a small press Fragmented Voices, with her friend and fellow student Natalie Crick. More information may be found at https://natalienera.com, and https://fragmentedvoices.wordpress.com/.