I haven’t blogged for a couple of weeks, partly because the overheads of actually getting into the place outweighed the amount of actual work done. I visited on 7th , 14th, 18th and today the 21st.

Each visit managed to make a little more progress towards getting into a productive work pattern. On Tues 18th we had network restored for the laptop in our office, thanks to the generous help of Jeff Craig (NUIT); this enables email and web searching (obviously), but also backing up the laptop to the University filestore.

There have been various hitches in access to the building (at least it shows how good Sir Robert McAlpine’s security is) but all have been overcome so far. We are becoming familiar faces to SRM’s people, and this also is a good thing.

We (and NUIT as a whole) continue to appreciate the warm cooperation that we get from SRM’s site foremen, and also from the gate staff whom we see most of.

And from the point of view of this Project, I cannot emphasise enough the widespread support we get from NUIT staff, in all their various roles, each of whom will go out of their way, if asked, to help us out of a difficulty. First and foremost I will mention Jason Bain (Assistant Director, Infrastructure), who has quietly given us extremely significant support at several crucial stages, right from the start, in 2016, when we first sought a place to store Roger’s Collection.

Finally:  I happened to be Last Man Out today: Phil the Gateman was just coming to lock up as I left. It was nostalgic being momentarily alone in the Tower, and remembering times past, when – on the last afternoon of work before Christmas – we’d merrily wend our way to the Computer Room, to pick people up to go to the pub(s). The one who stayed behind to look after the Computer Room while we were all out on the town would be Roger.

“We’re having some work done”

The Sub-Basement is relatively untouched, but not so the rest of the Tower. The Basement for example is going to be wonderful when it’s finished, but meanwhile… 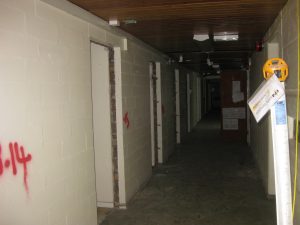 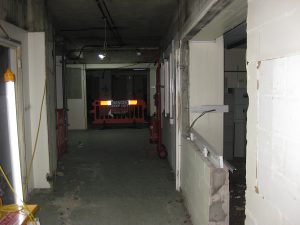 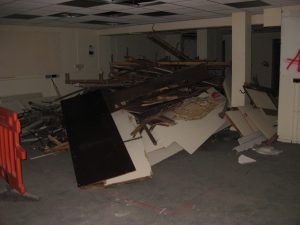 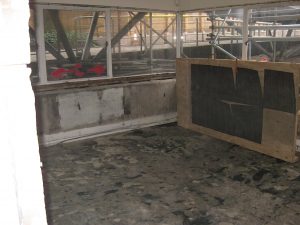