Today I went to the University Library and also to the Medical School to pick up artefacts which (tragically) were otherwise destined for the WEEE Collection.

First, our valued colleague in NUIT, Paul Kobasa, had lined up three “Visualisers” for us to pick up from the Library. For the first time in my career as a Museum Volunteer, I had to refuse an item! We really are running out of space, and so we put the two best examples in my car, and shamefacedly turned away from the third. They are not computers, BUT: they are valuable examples of old educational technology, which will never be seen again.These were used in the Library to assist visually disabled readers, and date from the mid-80s. 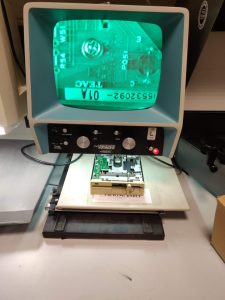 Paul put a hard disk under the camera,but it was usually used for books (I believe).

The other item that Paul had for us is an OSBORNE 1 PORTABLE COMPUTER! This was the very first (1981) “portable” (c.11Kg) computer. It’s a really valuable (to us) artefact, and what’s more it has come with a large number of disks, manuals, and even the order papers and invoice! 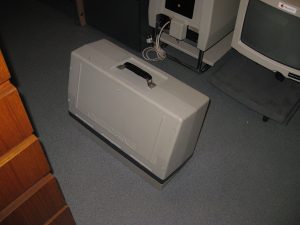 Weighs 11 kilos, hence the retrospective name for such computers as “luggables”, not “portables”, much less “laptops”. 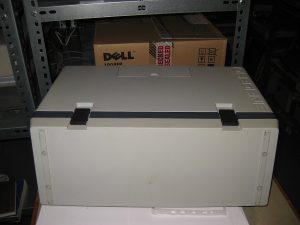 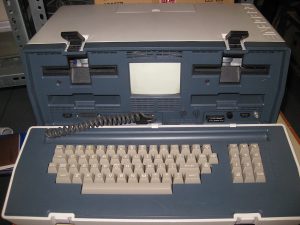 Secondly today, I went to see another valued NUIT colleague, Steve Bradwel, in Digital Media Services. He had said he had a superannuated Apple Mac G5 that we could have if we wanted it. “Oh yes”, had been my reply at the time of the call .. not knowing what it actually is (even though I’m an inveterate Apple user).
I didn’t reallise what was waiting for me. Such is its sleek, flawless beauty, combined with evident immense power … it was like taking a walk to the compost heap at the bottom of the garden and finding a Bengal tiger lying there, calmly regarding you. Or something. You have to see this thing in its solid, aluminium flesh, to feel its beauty. [Of course, these days it’s just a weak, old pussycat, even though it’s kept its looks.] 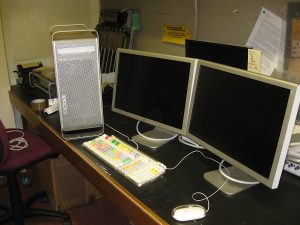 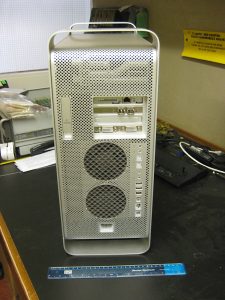 The computer itself weighs over 20Kg. (One of McAlpine’s lads offered to carry it for me … I don’t know why.) 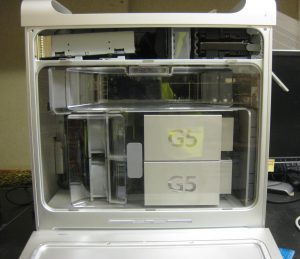 WOW! Apple at the top of their game. 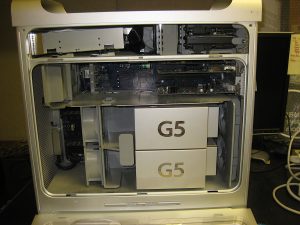 There’s a transparent cover in the previous photo – it’s off in this one. This system is about 15 years old, but it’s like new. 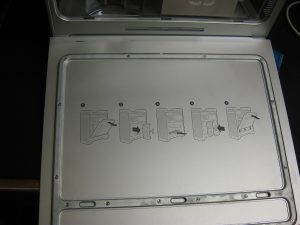 The inside of the side. “And this is how you …” errr.. add memory? Both of today’s donors feel that the two systems could be made to work again. If anyone ever wanted to make them do so!