I’m acutely aware that the Blog is very biased towards Claremont Tower, and the Collection’s Repository which is held there. Never mind! Even I (i.e. John Law) have not blogged recently, and so here’s a little picture to liven up your day. 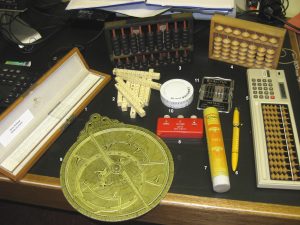 11 uncatalogued items from the “Calculator sub-collection” – see end of this entry.

My activities of “verifying the Catalogue” continue: “verification”, in this definition means just this: making sure that everything that Roger said that he had in his Collection (via his database), is actually there, so that we in the Committee know that we are starting exactly  where Roger left off.

This process of verfification has so far taken two years! Why? Well: we had to build a new repository to start with  – all of Roger’s collection had to be moved from other locations in Claremont Tower; our two companion  departments (School of Computing, and NUIT) moved to different buildings across town, causing immense disruption in terms of rescuing artefacts, and/or moving them; displays were organised in one of those buildings (USB); Claremont Tower itself became a building site last September (requiring special access procedures to be granted and strictly adopted); and above all because there are very few of us at present, and all of us very much part-time.

But the end is in sight! I have now been through a listing of the database several times, comparing the entries with the artefacts. I tell you what: if Artefact Number 1 were in position Number 1 on Rack number 1, and so on up to Artefact Number 429, this job would have been done a lot sooner; but in fact, the artefacts could not have been distributed more randomly. (But let me be clear: randomness is completely inevitable!) 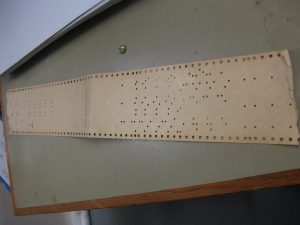 I’m almost at the end of what I see as my final review. Not least because we have a new database/catalogue being written for us! Lindsay Marshall erupted on to the scene about 3 weeks ago, and already has an extremely functional model of a new Catalogue … which will be accessible to all via the web. (Roger had only a single licence for the database he used, which NUIT has renewed each year; this restricted any use of the database to one person — whoever was sitting at the project’s own laptop.)

Lindsay’s new Catalogue is coinciding with my finishing verifying the old database. This was not planned. (“planning”?)

This last week I have been working on a fascinating “sub-collection” of calculating machines, which belongs to a certain Professor of Computing, and has been a “sub-collection” of the larger Collection for many years. It was on display in School of Computing in Claremont Tower, but is currently in storage. Apart from abacuses, slide rules, and “ready-calculators” made for aeroplane navigators, this is the sort of device that makes up the sub-collection: 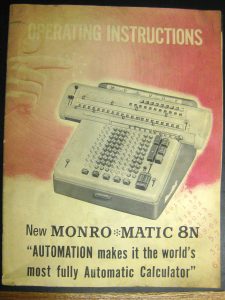 It behoves us all to remember that it was only a few decades ago that nobody  – from physicists and chemists down to accountants – could write, let alone use, computer programs: they didn’t exist. You had to do mathematics: hard mathematics! The devices in the mechanical calculator sub-collection gave, as it were, rocket-propelled assistance to those mathematicians, and were the technological miracles of their day.

When we have finished verifying the 420-odd catalogued artefacts, we already have about the same number again of new (well – far from “new”) items to catalogue – that will be another story, but thanks to Lindsay’s new catalogue there will be rather more of us doing that job 🙂