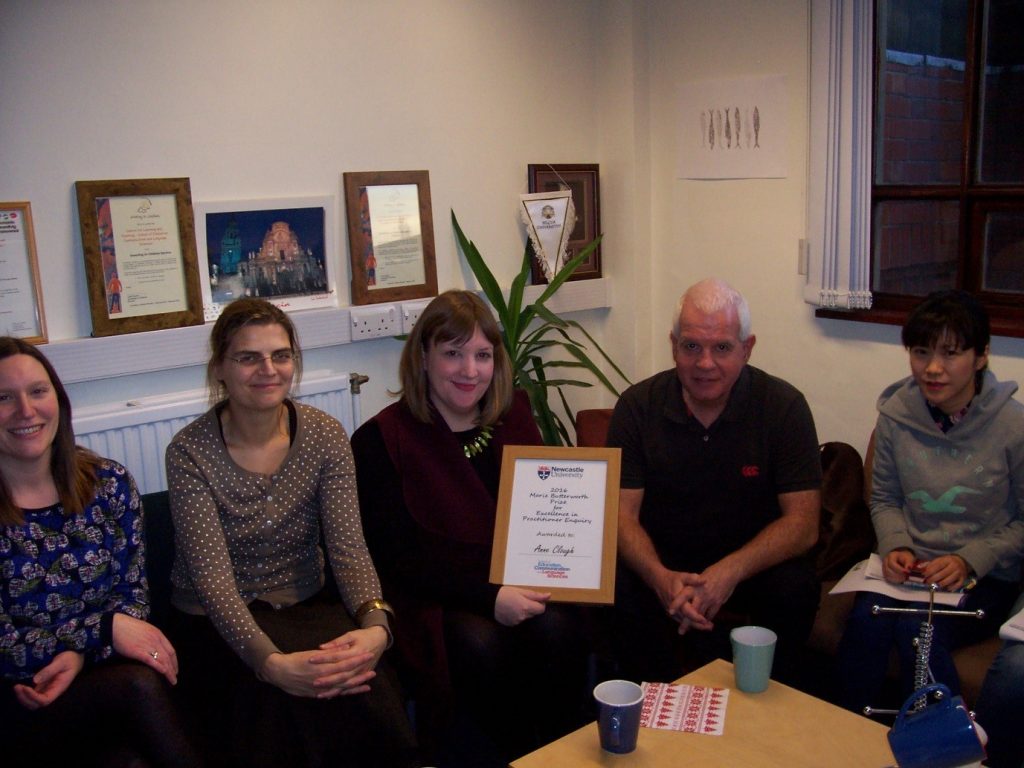 Anne Clough has won the 2016 Marie Butterworth Prize for Excellence in Practitioner Enquiry.  Marie Butterworth was a keen advocate of teacher research, an active participant in a number of ECLS research projects, a CfLaT research fellow and a local deputy head teacher.  ECLS is making this award in her memory to celebrate her enthusiasm and achievements.  Anne was a part-time Masters student whose dissertation related to the choices that English teachers made related to texts to be taught at GCSE and what the significance of their choices were.

She was presented with her award at a CfLaT research tea on 25th January 2017, during which she shared her motivation for the research and her findings.  We were pleased to welcome Steve Jones, Marie’s husband to this event and he was able to talk about how Marie had faced similar decisions as a former Head of English.  Laura Mazzoli Smith, Anne’s supervisor was also present. Anne’s work has relevance due to the current curriculum reform at secondary level in England. During the course of her research Anne gathered questionnaire responses from over 100 English teachers (making good use of twitter to elicit respondents) and undertook interviews with local Heads of English.  Her findings exposed nuances in decision making, but also exposed tensions, for example the restrictions imposed by the current austerity measures as they affect schools and how the curriculum is resourced, and the influence of pragmatic decision making around time and money.

The decisions that were being made about texts to be taught by the subject community enabled her to reflect on questions of cultural and gender representation (of authors and characters), how teachers balanced the risks of teaching new texts compared with the familiarity they had with existing ones, the question of the value given to texts which were considered to have relevance to children’s lives compared to how literature might extend their awareness beyond their own direct experiences.  Her dissertation work was the culmination of meaningful participation in practitioner enquiry throughout her M.Ed degree, and the award is a reflection of Anne’s innovation, attention to detail and reflective and analytical approach.

Anne has recently been appointed as Head of English at St Mary’s Catholic School in Longbenton, Newcastle.  She is using her research in support of the decision making she undertakes in her role, as well as the support and encouragement she can offer colleagues facing curricular and pedagogic decisions.

Our Secondary Core and School Direct PGCE and Employer-based PGCE students (based at Newcastle SCITT) started their new term with a busy period at both university and in school.  One aspect of this was the two day conference on Teaching Thinking Skills, which is the taught basis of a Masters module.   Here the students were introduced to thinking skills, metacognitive talk & lesson study, and they will follow this up using Lesson Study to co-plan, teach, observe and co-enquire into this pedagogic approach in their placement schools, as described in a previous blog post. The focus on teaching thinking skills builds on the legacy of former work by tutors and school teachers in the North East of England, in the late 90s and early 2000s which resulted in the ‘Thinking through …’ series of books. 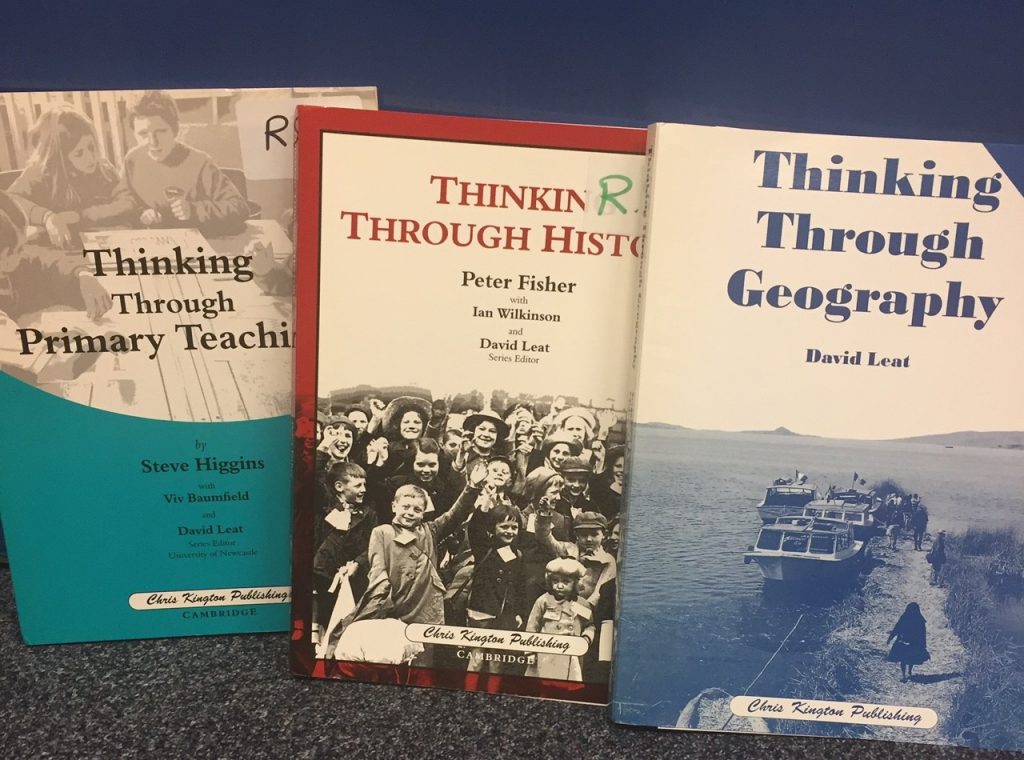 During the conference students had keynote lectures provided by ECLS colleagues Professor David Leat and Dr Rachel Lofthouse and Kirsty Tate (Assistant Headteacher from Park View School), and were also introduced to Project-based learning by a group of their fellow School Direct PGCE students.

In between these session were six workshops.  Each one designed to ‘model’ popular strategies for teaching thinking skills. Each strategy was be briefly modelled so that students could gain an appreciation of Thinking Skills pedagogies from learners’ perspectives. This was followed by discussion which allowed them to think about which approaches they want to plan for in their own subjects and phase for their later lesson study.   Workshops were well received by the students, as one of our Employer-based PGCE students stated, “The sessions on Thinking Skills were very engaging and highly insightful.”  What a relief to know that the legacy of the original research and development work from well over a decade ago lives on! Details of some of the six approaches modelled in the workshops are given below.

Mysteries give students an opportunity to develop thinking skills and work collaboratively. They require students to link information logically into cause and effect and justify their decisions.  They encourage substantive conversations and can create cognitive dissonance which while it can frustrate usually sparks enjoyment and creativity as students start to ‘argue’ and hypothesise’ – great fun as a student and as a teacher!

Visualising thinking, and working collaboratively, to plot less conventional information, such as non-dated events, emotions and observations on paper, required trainee teachers to communicate effectively, justify, argue and reason to support their decisions and choices. Within minutes of reading through the statements for the first task, substantive conversation, contextualisation and linking to the real world were all evident alongside an increased depth of engagement and discussion that anyone may have predicted based upon the subject matter!

The Map from Memory strategy required students to work on their memory, by providing a context in which they became more aware of their memorisation techniques, worked out how to develop some specific strategies, with a view to becoming more effective learners and readers. Students worked in groups of four and tried to memorise chunks of visual information. Individuals came out in turn to look at the map and commit this information to memory before passing it onto others in the group as accurately as possible. In reflecting back, groups discussed some of the skills underpinning a successful approach to interpreting text or diagrams or both. It helped to raise awareness of what is involved in enabling learners to arrive at a ‘global’ or ‘gist’ understanding, establishing the ‘big picture’, and how the ‘big picture’ can help to interpret the meaning of parts of it. Adapting the strategy to different subjects and how it could be used in different ways was also discussed.

This technique focusses on developing pupil ability to justify choices to meet changing situations. It is a life skill in that it mimics the evolving choices we all make with a range of options but variable demands. How do we choose what to wear when surveying the weather on a daily basis? It teaches pupils that we can make decisions to create valid answers but also that it is a real skill to select different responses when the occasion demands. It is highly adaptable to all subject areas in school – from identifying the appropriate quotes from a novel to exemplify different themes within literature or selecting which equipment to conduct a range of experiments on a fine system in biology. Choosing only 6 options from about c.20-30 possibilities means that pupils can juggle a manageable amount of information and the layered decision making encourages substantive conversation, compromise and justification of conclusions. Great preparation for subsequent writing!

Odd One Out and Symbolic Stories (Rachel Lofthouse)

In this workshop students were first asked to scrutinise three photographs of classrooms, generating responses to the question: which this the Odd One Out and why?  It is a very flexible technique and can be used as a quick starter or plenary, as well as a more substantial activity.  We then practiced Symbolic Stories. An extract of text was read to the students and they individually interpreted this drawing symbols and pictures. Once they had done this they retold the story to a partner, giving an opportunity for them to fill in gaps for each other, compare how they each used symbols for different ideas, and opening up subject related themes through discussion.

Predicting requires students to state from observations and previous knowledge what is ‘most likely’.  It requires them to look for patterns and trends. With a good prediction activity a teacher needs to clearly define what the prediction is to be about and to identify attributes that help inform the prediction. So a prediction activity is different from a guess because a guess is based solely on experiences that are recalled from the past. Guesses may lead to inaccurate predictions if they fail to be substantiated by data collected over time by the student. Mostly likely activities require students to use their existing knowledge to inform future thinking. 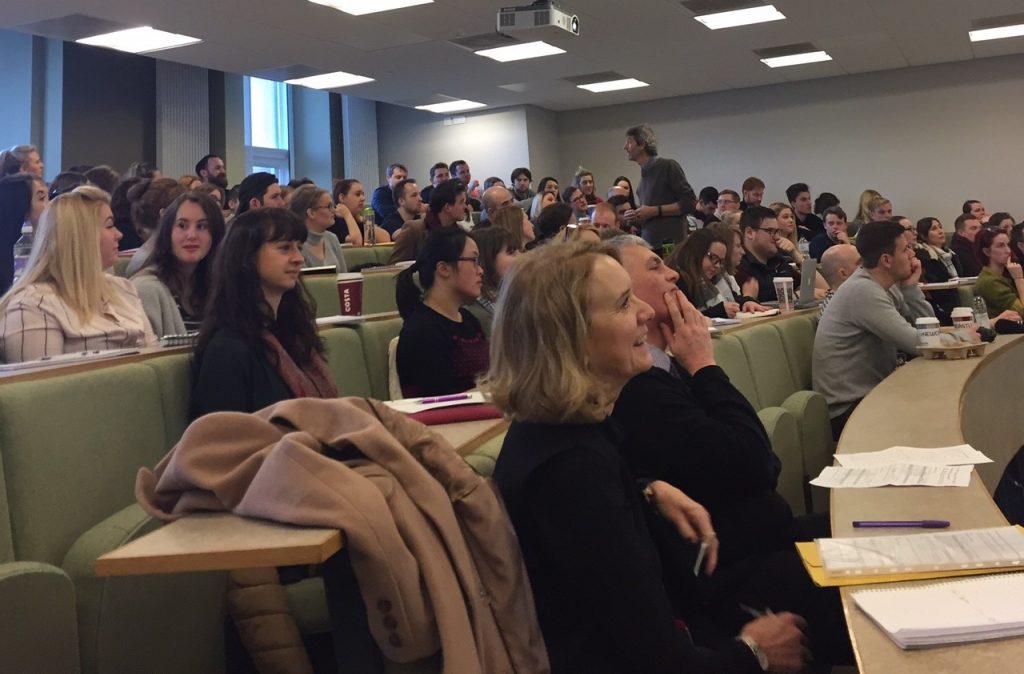 I participated in the 21st Century Academic Forum Conference which was held at Harvard on 27-29 September 2016 and I gave a presentation entitled, “A Study of Vietnamese International Undergraduate Students’ Psychological, Sociocultural and Academic Adjustment at a Thai university”. 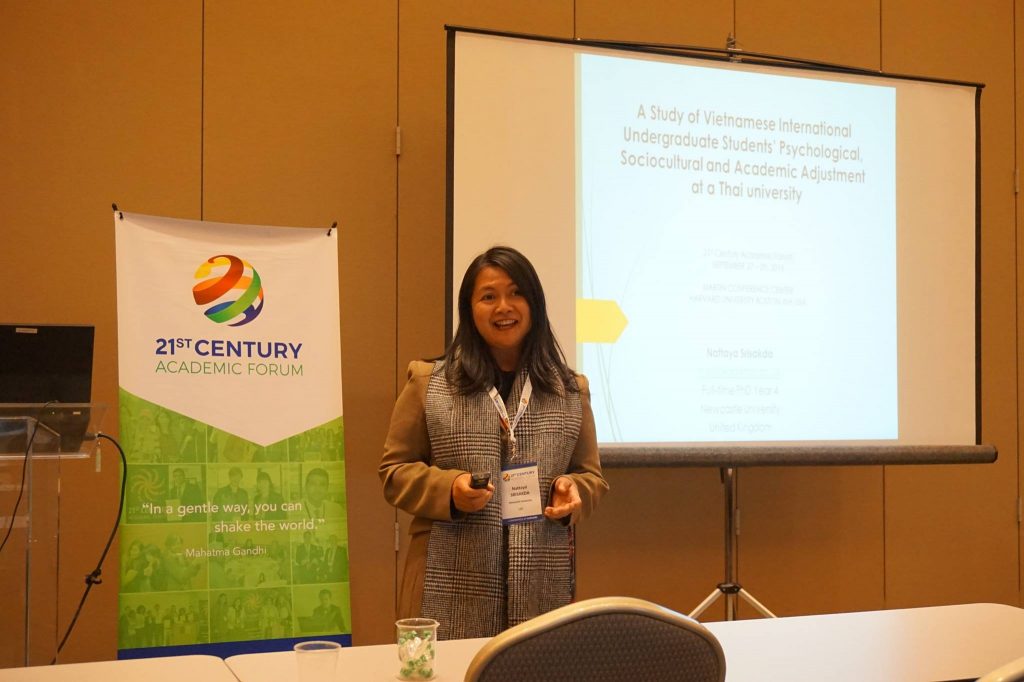 On the first day of the conference, I also attended a workshop on the topic, “Social Innovation based on Collective Intelligence Workshop” led by Professor Hideyuki Horii of the University of Tokyo. The goal of this workshop was to create ideas of social innovation based on collective intelligence. It seemed that the workshop was run to break the ice because all the attendees were required to join and complete the task in groups. The activities were great and because all the attendees started to talk, introduced themselves and helped each other to complete the assign tasks. It was fun and a great start. 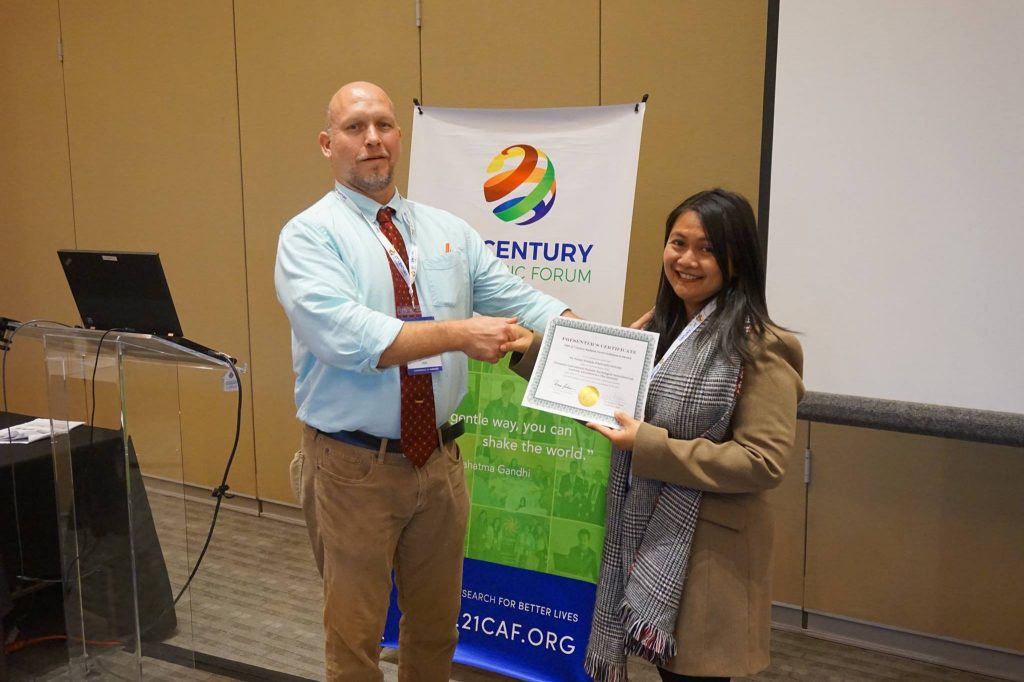 On the second day, I presented my work. There were several benefits in presenting my work at this international conference.

Firstly, presenting my work at a conference gave me an opportunity to practice my presentation skills. It helped me develop the expertise needed to discuss my research in a clear and meaningful way. I learnt to answer questions raised by the audiences (who may or may not be familiar with my field of research) which would help me in other endeavours such as the dissertation defence (just be prepared!).

Secondly, at the conference, I had an opportunity to meet researchers with similar interests, giving me the opportunity to discuss my research and learnt valuable information from people working with similar techniques, populations, or statistics. Comments from other researchers provided new insight and perspectives about my work. 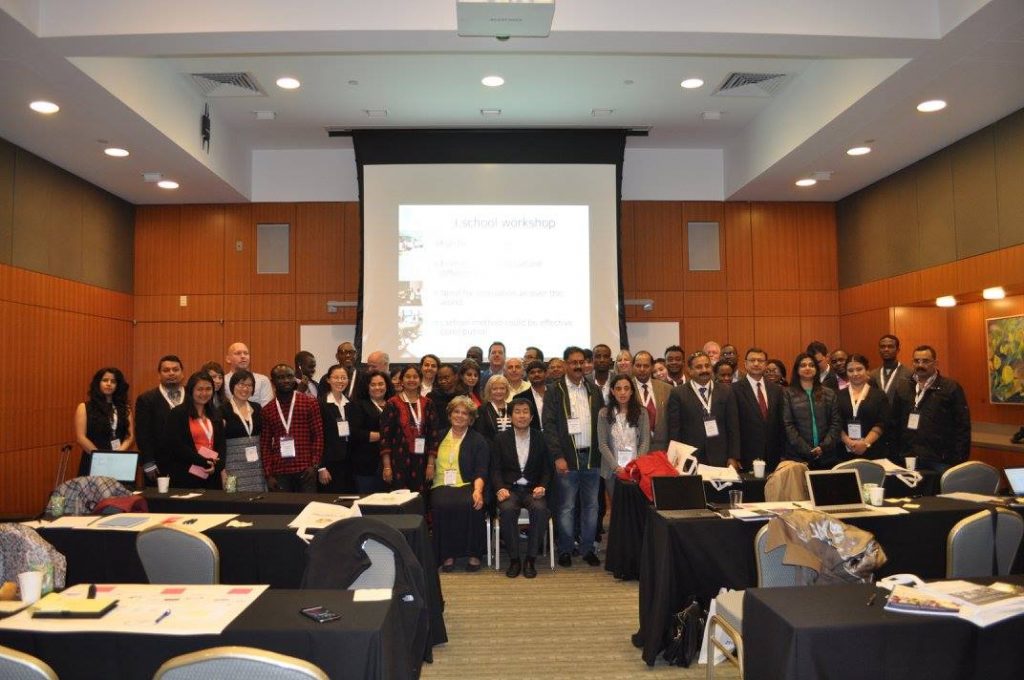 Thirdly, since it was an international conference, I had an opportunity to meet researchers and educators from over the world, which was a great opportunity to make connections.

Last but not least, I also learnt things outside my field since this international conference supports the expansion of research exploring interrelationships among the disciplines.