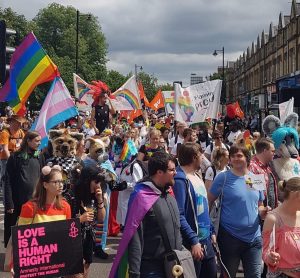 This weekend marked the eleventh year of Newcastle Pride, and what an incredible Pride it was.

The main celebrations kicked off at 12pm on Saturday from the Civic Centre, with an estimated 20,000 people marching all the way from the city centre to Nuns Moor Park, and thousands more lining the route in support. This year was the largest Newcastle Pride to date, and in some places the loud, colourful parade took over half an hour to pass onlookers. 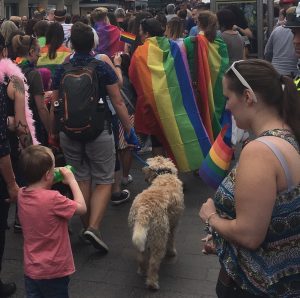 The atmosphere was joyful, energetic, and most of all, accepting. All across the city, the rainbow flag was present. People wore it, painted themselves with it and carried it. It flew proudly in pubs, shops and at Newcastle University, celebrating 50 years of rainbow.

Festival director, Stephen Willis, highlighted this year’s efforts to make Pride inclusive for all, stressing that they had “strived to make sure that there was something for all ages and identities”. And that there was. Marchers of all genders, ages and races (and even a few furry friends!) came out to show their support, demonstrating how diverse of a place Newcastle truly is. Importantly, the route was also accessible, ensuring those with a disability could participate. 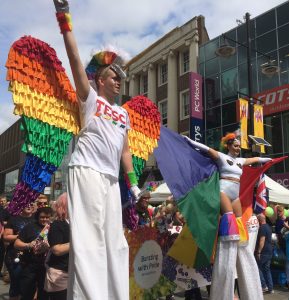 There were also marchers from local and national organisations, including community groups, retailers and the emergency services. People demonstrated their diversity, creativity and freedom through their outfits. Some came on stilts, and one was even dressed as the Queen.

Supporters carried placards and banners bearing poignant slogans such as “it matters not what someone is born, but what they grow to be” and “love is a human right”. Meanwhile, others took a more humorous approach, including a bee-themed sign with the words “bee proud” written on it. 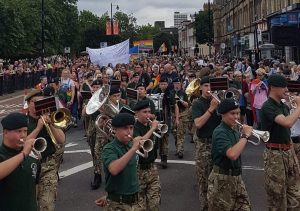 Near Haymarket, the air ambulance circled overhead in support, adding their sirens to the sounds of whistles, singing and army drums; and on Nuns Moor, there was music from artists such as S Club, Alexandra Burke, Gareth Gates, Steps and the Vengaboys. The weekend closed with a candlelit vigil at 9pm on Sunday, where thousands of candles were lit to remind people of the significance of Pride.

All in all, it was a fantastic weekend that truly demonstrated how far both the LGBT+ community and society has come. Bring on Pride 2019! 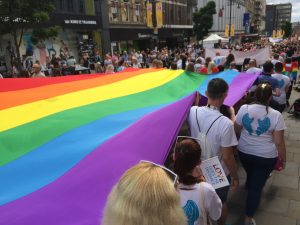