This week, I attended the first of three workshops on the language we might use to talk about equality, diversity and inclusion (EDI) issues, organised by staff from our School of Psychology. Whilst I was secretly hoping for a clear steer around what terms I should (and shouldn’t) be using, I got a lot more from the talks and discussions we actually had.

The idea for the workshops stemmed from some first-hand experiences: it is easy for even well-meaning staff to upset students with the words they use without even realising it. And when acceptable language can change quite quickly, it can be particularly challenging for people to always use the right words in a particular situation.

The workshop had three fantastic speakers, all with their own perspectives and approaches to the importance of language around EDI. The first speaker was a young researcher from our Faculty of Humanities, Arts and Social Sciences, Katie Markham. Katie eloquently talked through some recent examples of where things said on social media had dramatically gone wrong. Through exploring these, what I learned was the importance of listening to the complaint if we use the wrong language: it is OK to feel the sting of criticism, but so important to learn from it.

Our second speaker, Nadeem Ahmad, who has worked in a number of EDI advisory roles and is a Trustee of Show Racism the Red Card, directly addressed whether there should be a list of “dos and don’ts” in the language that we use. Whilst I was hoping there would be an easy “yes” answer to this, his answer was, “no, there shouldn’t”. That’s because when we become prescriptive about what can and can’t be said, it opens up the opportunity for people to argue that there is nothing wrong about certain words being used under particular circumstances. Instead, he suggested that we should all have a list of words we try to avoid, and that we should be asking ourselves, “Do I need to use that word?”. This seems a much more pragmatic solution, and one to keep in mind. 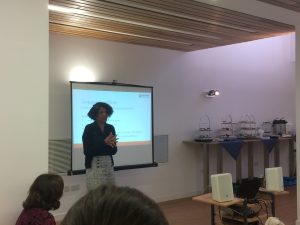 Our final speaker was Chi Onwurah, MP for Newcastle (Central), who spoke about some of her personal experiences of growing up in Newcastle, and the importance of discussing the language we use. She spoke powerfully about the problems she has with the use of the term ‘political correctness’: my personal feeling is that this term can be used to mute criticism from those affected by what is perceived to be insensitive language. But surely we need to be making sure that we don’t cause offence to people unintentionally, not defending language deemed to be inappropriate?

My take-home message was, that whilst it is clearly worth putting in some work to understand what words are offensive or acceptable (and the University will be producing some guidance on that shortly), interpretation of language depends upon the context that it is used. But when people are offended unintentionally, the key response is to listen, understand, and learn for next time. I’m sure that other people will have different points of view, but we are all individuals, with our own views, and our own ways of expressing them. The key thing is to make sure that what we say, whatever the situation, is respectful and as considerate as we can be. And if we are challenged on the words we’ve used, listen carefully, and think about whether there might be a better way to say it next time.