“We truly have a community that is both diverse and inclusive at NUMed, and we are incredibly humbled that so many have come to be with us to celebrate our 10th anniversary. We anticipate what the future holds as we continue to develop our role in medical education in Malaysia and across the world,” 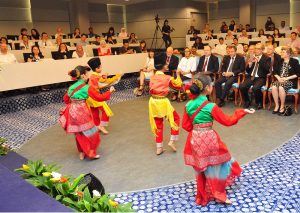 On 21st September 2019, Newcastle University Medicine Malaysia (NUMed) turned 10. Since welcoming its first cohort of students in September 2009, this first international branch campus of Newcastle University has been delivering exceptional medical education in Malaysia, extending the legacy to the Southeast Asian region. NUMed’s global community of students, faculty, staff and alumni convened to celebrate this momentous milestone, which was marked by a medley of local cultural performances and moving speeches by international and local leaders in education. Prof. Baldwin imparted his thoughts on what he observed were the makings of NUMed’s success: the excellence of all its staff, both academic and professional; the cooperation between NUMed, Newcastle University, UK, and NUMed’s partners in Malaysia; and the openness and collegiality of the NUMed community, whether international or local.

The Founding Provost and Chief Executive Officer of NUMed, Professor Reginald Jordan, spoke fondly of his experience: “Having seen the NUMed project through the early development stages, our move to the region marked the culmination of much hard work. It was a most exciting, if somewhat daunting, prospect, with the challenge being to translate the planning blueprint into reality and to fully realise the NUMed vision.” 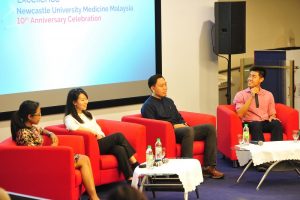 Fast forward ten years, and the FMS EDI Team and the School of Medical Education Academic EDI Lead have been proud to support colleagues at NUMed to form their own EDI committee comprising 11 members of staff, a mixture of PS and academic staff plus two students. The team at Malaysia took the initiative to hold discussions with their counterparts in Reading and Southampton prior to setting up the EDI committee. These two campuses, along with Nottingham and Herriot-Watt, do not have local EDI committees, as a result NUMed has been a trailblazer, as the first campus in the region to look at EDI from a local perspective.

The over-riding principles for EDI work at NUMed are not around replicating what is currently in place in Newcastle but ensuring that the work is relevant for Malaysia. In deciding on the priorities for EDI at NUMed, members of the EDI committee attended an event in February 2019 held at the British Malaysian Chamber of Commerce where the keynote speech around EDI was delivered by the Deputy Minister for Women, Family and Community. In this speech the four key EDI areas for the Malaysian government were highlighted i.e. gender, race, disability and language and it is these areas that the EDI committee have taken as the cornerstone of their current work.

We are proud of the role that NUMed plays in the success of the Faculty and the University. As Prof. Richard Davies, Pro-Vice-Chancellor, Global, of Newcastle University noted, “The real strength of NUMed lies in the talented and passionate people of the university with shared affinity, ambition, and dedication. With that, there is no doubt that the best is yet to come.”