Last week John Lewis became the first UK retailer to abandon gender categories on their own-brand children’s clothing. Their head of children’s wear explained the decision, stating ““We do not want to reinforce gender stereotypes…and instead want to provide greater choice and variety to our customers.” Hoorah to that!

A quick Google search for ‘boys dresses’ to find a suitable picture for this post resulted only in what you see above. Something out of Tudor times. Or from another continent. John Lewis are the first UK clothing chain to acknowledge that perhaps the enforced labelling of what a boy or girl ‘should’ wear is similarly archaic and culturally constrained. Rather than re-designing their clothing range, they have simply ditched the labels and abandoned the separate sections characteristic of most clothes stores.

But is this ‘political correctness’ gone mad? One MP has criticised the decision saying “Boys and girls labels and signs are informative. I think removing them could be very confusing for the consumer… I cannot see many customers buying a dress for their six-year-old boy.” He is, perhaps, missing the point. Which is exactly that we need to move away from this mentality that a certain type of clothing is meant for one sex or the other.

We should also give parents some credit. Moving the pasta next to the jam in a supermarket doesn’t send your average adult into turmoil because they wouldn’t expect those two things to be together. They might need to ask the first time. But then they’ll get it. Perhaps no boy really wants to wear a skirt. But is that because none of the other boys are doing it yet? Or because mum or dad walks straight past the ‘girls’ section in the store? Maybe little girls do want to wear pink flowery dresses, and that’s fine.They’re still on the shelves. It’s just now, they will be on the shelf next to the purple dinosaur top or the pink star shorts. And parents won’t be dictated to as to which child they’re designed for. 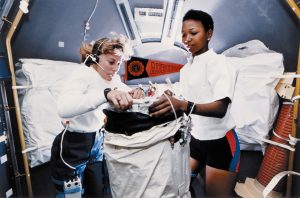 Can women be astronauts? This seems to have been a theme on the BBC over the last couple of weeks, with two different TV programmes addressing issues of career gender roles and stereotypes. The first, ‘No more boys and girls’, documented the work of Dr Abdelmoneim and his experiment to examine whether making small interventions to the classroom environment could change the strict gender-typed views of 7 year olds. The premise was a good one: To challenge traditional stereotypes about what boys and girls can do by pointing out equalities rather than differences. The execution? A developmental psychologist might be left saying ‘Hmmm’. No verbal matching. No matched control group. Massive long tasks for busy parents to complete. Sweeping conclusions based on a handful of children in a community school on the Isle of Wight. It actually downplayed the fantastic work that many schools across the UK are already doing to promote gender neutrality in schools. There are girls’ football teams. Children may well have seen a male ballet dancer. And most 7 year olds probably know that a woman can go into space too. Great that it made parents stop to think about the influence they were having. And great that some of the girls came away with higher self-esteem whilst some of the boys found a new love of sewing. But ground-breaking or revolutionary, it was not.

Perhaps more encouraging was Sunday night’s documentary about 12 astronaut applicants. Where men and women from all sorts of backgrounds (From surgeon to mountaineer to PhD student-come-ballet dancer) were filmed going through the rigour of the astronaut selection process. No fuss was made about the gender, age or background of each person. It was simply about how difficult a profession it is and how much each individual had achieved to get so far. Showing how everyone overcomes their own barriers and that gender or race have nothing to do with ambition. So perhaps this is the way to teach children about gender equality. Instead of priming them with tasks that are all about gender expectations, actually just let them see, without the labels or rules, what any individual is capable of.

What do you think works best to teach our next generation that the presence of a Y chromosome (or not) doesn’t matter? How can we encourage true gender equality in our youth…?

Tolerance: “The ability or willingness to tolerate the existence of opinions or behaviour that one dislikes or disagrees with.”

I was having a conversation with a colleague the other day, whilst we were planning a series of workshops that our team are going to be running around the misuse of terminology concerning protected characteristics, and she commented that the word ‘tolerant’ makes her squirm. A lot.

This wasn’t something I’d given much thought to before, but she was exactly right: ‘Tolerate’ has a sub-text of ‘putting up with until it goes away’. And that’s really             not what this term is meant to be about. We shouldn’t be ‘willing’ to allow others to have their own beliefs or opinions that might differ from our own. We should be, as my colleague rightly pointed out, actively accepting it. Embracing it. Understanding it.

So perhaps ‘tolerance’, despite its well-meaning intent, actually smacks of ‘making do’ with a situation. Perhaps there’s a bit of ‘I won’t interfere but as long as it doesn’t affect me’ wrapped up in the word. When, actually, perhaps what we need from society is a much more open-minded view, where we choose to understand and really embrace one another’s backgrounds, cultures, identities or lifestyle choices.

In the E&D team, we would like to run some workshops that will focus on these kinds of issues and hopefully help to break down some of the taboos and barriers around misunderstanding another person’s identity. Very often, ‘putting up’ with something is driven from a fear of it: Not knowing enough about it or only knowing what labels and stereotypes the media has left us with. Not wanting to interact because we perhaps don’t know how. In nurturing open and honest discussions about one another’s identities, we hope that we can move from tolerance to acceptance. With the grand goal of inclusion. Because that’s ultimately what a positive society is all about.