Following our blog post looking at the distances of football grounds from their nearest railway station, we had a think about other interesting football-related analysis that we could do. Having previously been a holder of an away season ticket, I thought that one interesting comparison might be to investigate which football fans would spend the longest on public transport to visit away games.

In order to do this analysis we used the Google Maps Distance Matrix API (https://developers.google.com/maps/documentation/distance-matrix/ ) to calculate the time and distance you would have to travel on public transport between each football club, to arrive at 2pm on a Saturday. The locations of the football grounds were used as the start and end points for each journey since we obviously don’t know where supporters actually live! 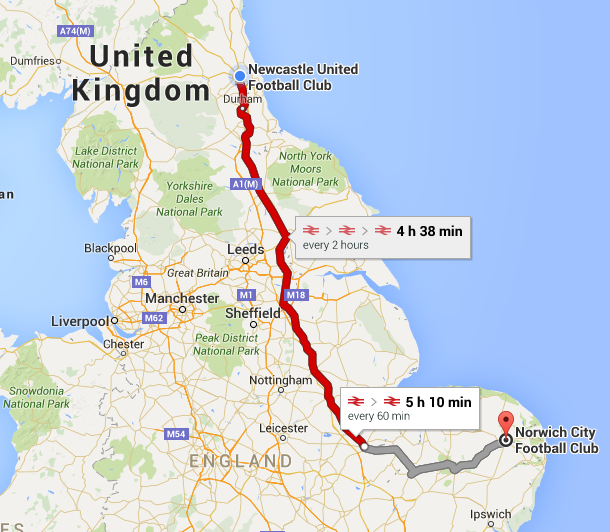 Below is a list of the 5 longest away trips between any pair of Football League or Premier League clubs. You could look at this as the nightmare FA Cup draw if you’re committed to going to the game, and the ones you really don’t want to be switched to a Friday night for TV coverage.

The 5 quickest are below – some of these would likely be quicker to walk!

In summary, you really don’t want to draw Plymouth away…