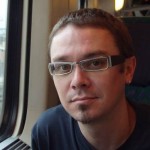 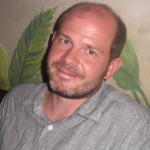 Last year we brought you details of the inaugural CBCB Symposium. In July the second CBCB symposium was held, and today we hear from the organisers, Kevin Waldron and Heath Murray, about this latest successful event.

The idea for an annual Centre for Bacterial Cell Biology (CBCB) symposium was originally conceived in 2013, and aimed to showcase both the high quality and the immense breadth of research activity that goes on in this unique Centre. It would also be an excellent opportunity to bring together the CBCB research community based in both the Medical School and in the Baddiley-Clark building to discuss their work and build future collaborations.

It wasn’t long after our 2014 Symposium was over when the organising team (Bernie Shaw, Heath Murray, Kevin Waldron and Jeff Errington) began planning for this year’s second event. Obviously we were delighted with the success of that first meeting, but of course it also applied a little pressure on us as organisers; this year’s event had to achieve a similar level of success. Fortunately, the feedback we had received from the 2014 event included a number of constructive suggestions from the CBCB community about how we might be able to improve the Symposium, and we tried to incorporate as many of these ideas as possible. 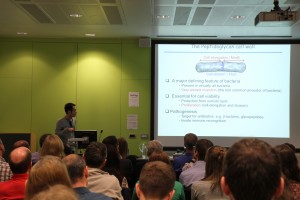 One of our postdoctoral researcher speakers, Yoshi Kawai, addresses the Symposium audience on the subject of L-forms

One suggestion was to include a number of more junior speakers in the Symposium Programme as well as PIs, and we are grateful to those postdocs who volunteered to present their work to the CBCB audience. Alexander Egan told us about his research in the Vollmer lab on the proteins that coordinate biosynthesis of the cell envelope during growth and division. Yoshi Kawai of the Errington lab explained  how L-forms, bacteria that lack their cell wall, can be produced in the lab and how they propagate in a manner independent from the known bacterial cell division machinery, as well as speculating on their implications for early life forms on Earth. Marcin Dembek of the Salgado lab contrasted the mechanisms that govern sporulation in Clostridium difficile, a pathogen that primarily causes infections via spores, and the model organism Bacillus subtilis. Finally Didier Ndeh described his research in the Gilbert lab on how gut bacteria degrade the most structurally complex dietary polysaccharide known, rhamnogalacturonan II. PI speakers covered further topics relating to antibiotic discovery and their mechanisms of action and synthetic biology.

In addition to our CBCB researchers, we also again invited two high-profile external speakers. The day started with Mark Leake (University of York) who told us about his research using state-of-the-art microscopy for in vivo imaging of single molecules within the bacterial cell. And the Symposium was concluded by John Helmann (Cornell University) on the subject of transcriptional stress responses in one of CBCB researchers’ favourite model organisms, Bacillus subtilis. 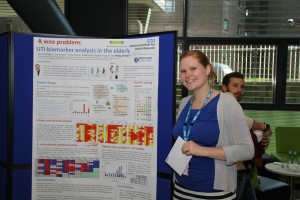 Another of the suggestions that we incorporated into the Symposium schedule this year was a poster session, which was accompanied by light refreshments (of course!) immediately after the day’s talks. We had a great turnout, with more than 20 posters on display, and the session generated a lot of lively scientific discussion. Again the Symposium organisers are very grateful to all those members of CBCB who participated in the poster session. We awarded three poster prizes, with congratulations to winner Lauren Drage for her excellent poster describing her research in the Aldridge lab looking for biomarkers for diagnosis of urinary tract infections, and to our two runners-up, Martin Sim (Wipat lab) and Clare Wilson (Errington lab); and of course thanks to our poster judges, Lucy Eland and Yulia Yuzenkova.

Finally, we all got to enjoy an informal barbecue dinner and drinks, where the science discussions could continue into the evening. 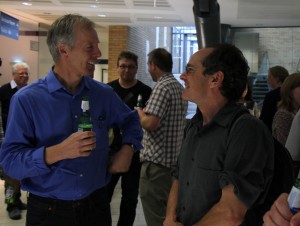 Planning has already begun for next year’s Symposium, which will be held on the 8th July 2016, and will feature two more external keynote speakers, Christine Jacobs-Wagner (Microbial Sciences Institute, Yale University) and Prof. Tracy Palmer (Molecular Microbiology, University of Dundee). We welcome your feedback too, so if you attended this year’s Symposium and you have any suggestions about how we might improve next year, please let us know.