On the week of the 6th November 2017 Speech and Language Therapy students took part in a No Voice Challenge. For one day of the week they used a range of Alternative and Augmentative Communication aids instead of speaking with the aim of raising awareness of the importance of Speech and Language Therapy as part of the Giving Voice Campaign. The Regional Communication Aid Service kindly lent us high tech tablets with symbol programmes installed, e trans frames and communication charts. Other AAC approaches adopted included VOCA apps on our phones, symbol apps, signing, writing, alphabet boards and drawing.

Below are some comments from those who took part: 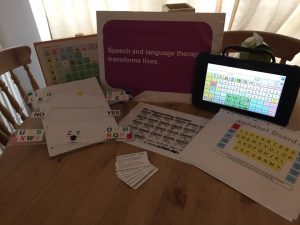 What AAC/ strategies did you use the most?

How did you feel?

How did others react to you?

How did it impact your participation?

How will this experience influence how you work with clients?

We learnt a lot through the No Voice Challenge and would recommend it to anyone working with people with communication difficulties. It has helped us gain a small insight into what life is like for some of our service users. We’d like to thank everyone who sponsored us and helped us raise £532.13 (including Gift Aid at time of writing) for the Percy Hedley Foundation.