A task that is routinely used by different clinicians (speech & language therapists, psychologists, neurologists) to evaluate the ability of adults with aphasia (the language deficit often associated with stroke) to remember spoken information for a brief period of time is the so-called word-span task. Lists of words that become progressively longer from one list to another are read out to a person. The person has to repeat each list immediately in the same order. Word-span provides clinicians with an insight as to whether short-term memory for language is compromised. Healthy people who do not have aphasia show variable performance in word-span. Demographic factors (age, gender and level of education) have been reported to influence performance on word-span, either favourably or unfavourably. For example, younger adults perform better on word-span than older adults. Also, older adults who are more educated perform better than their less educated peers.

When using word-span clinically to assess individuals, based on knowledge drawn from healthy individuals, some authors suggest that it is advisable to adjust word-span scores for age and/or education. However, very little is known whether the demographic characteristics of people with aphasia (such as age, gender, education) influence performance on word-span in relation to the language abilities they have as a result of their aphasia.

The present retrospective analyses of data from the Aphasia Bank (a shared database of interactions for the study of aphasia), had two aims:

Demographics, language ability (the Western Aphasia Battery, a standard aphasia test) and word-span data from the Aphasia Bank (212 participants) were analysed using regressions. Demographic characteristics were age, education, gender, time-post onset. Time post-onset refers to the length of time since the person had a stroke and has lived with aphasia.

The findings showed that only age and language ability (i.e., performance on the Western Aphasia Battery) predicted performance. Education, gender and time post-onset did not. Older participants performed worse, and participants with less severe aphasia performed better. Importantly, language ability exerted a much greater effect than age. These findings suggest that the effect of brain damage (reflected in language ability) attenuates the role of demographic variables on word-span. Age did not influence scores in naming, repetition and spontaneous speech but did exert a small influence on spoken understanding.

In summary, overall, in chronic aphasia age does not influence language ability, except for a small effect on spoken understanding of language. Education and time post-onset did not affect any of the language measures. There were small effects of gender on spontaneous speech and spoken understanding. Word-span had a prominent influence in all linguistic abilities (but most notably in naming and repetition). This might partially reflect the fact that word-span requires verbal production, but it is in line with previous studies that did not take into account demographic factors. Clinically, the findings suggest that it is more important to adjust for age than education when using word-span.

The present study was carried out in collaboration with Gayle DeDe (Temple University, USA). It was presented at the 54th Academy of Aphasia meeting in Llandudno. We would like to thank ECLS for the financial support to present this study. The authors are greatful for the support of Prof Brian MacWhinney for giving us permission to use Aphasia Bank for this project.

Thanks to ECLS postgraduate conference fund for approving my trip to IARC in December 2016. The conference was an excellent opportunity to immerse myself for three days in the world of aphasia research and to network with colleagues from around the world.

I had the opportunity to present my poster on interventions to support internet use for a person with aphasia. Poster sessions were organised so that delegates rotated around posters in small groups, giving me the chance to give a short talk to small groups. Thirty delegates took a copy of the poster and many more took photographs or requested copies by email. Interest was very positive, with many reporting they felt a need for research in the area. 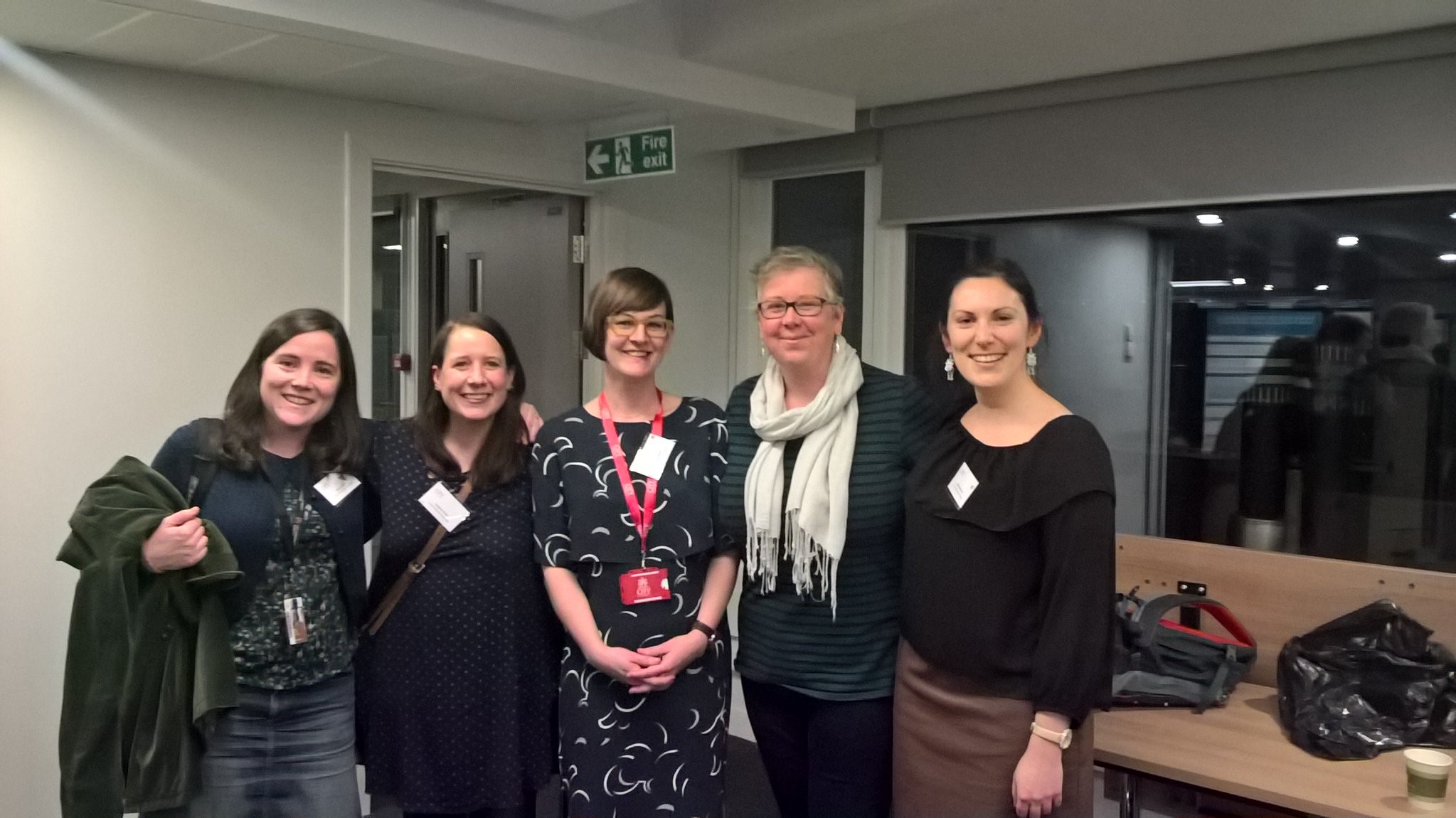 The conference provided me with the opportunity to discuss my work with people with similar research interests. This included a group of early career researchers working on email writing and technology to support written expression (see picture below), and a Swedish OT with an interest in skills needed for successful Internet use and use of everyday technologies. I also had some interesting discussions with colleagues around measuring informativeness and interest of written narratives which has led to finding and reading recently published papers of great relevance to my PhD. Workshops and talks on the final day were extremely useful for considering some of the issues around designing technology for and with people with aphasia.

Outside of my own work, the conference explored a breadth of issues in aphasia research increasing my knowledge and awareness in many areas. Talks I found most interesting were on the published systematic review on SLT for aphasia after stroke, outcome measurement, group therapy, telerehabilitation, Big Data driven approaches to decision making, predicting recovery using fMRI data, and treatment of depression. There was also a hugely varied and interesting display of posters on each day of the conference.

Finally, the conference dinner was a glittering affair in the St. Pancras Renaissance hotel. This provided the unforgettable experience of a group of aphasia researchers recreating the famous Spice Girls video filmed in the same location. No picture attached to preserve professional dignity.

A Faculty of Medical Science and Newcastle Institute for Creative Arts Practice Engagement Project, based within Speech and Language Sciences ECLS, Newcastle University 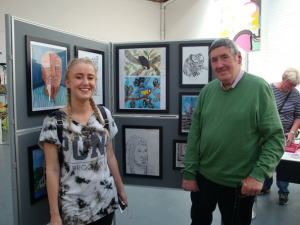 The NETA Travelling Art Show took an exhibition to nine venues across the North East region from June to November 2015, targeting areas where stroke disease is more prevalent.  The exhibition showed high quality art created by people with aphasia and provided information about stroke disease, including risk factors and prevention, research projects and aphasia. Nearly 600 people interacted with NETA members and got first-hand information about aphasia and stroke. 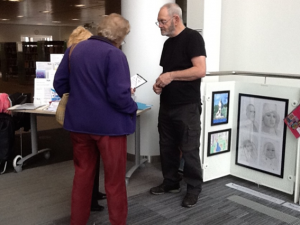 People with aphasia were involved at every level, and Fine Art students helped make it happen. Quantitative and qualitative data show the success of the project in raising awareness of aphasia and stroke.  The public’s comments reflected their appreciation, as in the examples below. The combination of attractive artwork, an experienced person to talk to and literature to take away, helped reinforce the messages. NETA members grew in confidence as the project progressed and they could see the positive impact it was making. Fine Art students had the opportunity to be involved in an inter-disciplinary project and take it out into the community.

For more information about aphasia and NETA www.neta.org.uk

Professor David Howard, researcher and lecturer for the Speech and Language Sciences department at Newcastle University has been awarded the 2013 Robin Tavistock award, presented by The Tavistock Trust for Aphasia. This award, named after Robin Tavistock, the 14th Duke of Bedford who founded The Tavistock Trust for Aphasia, is presented annually to a person, or group, who has made a significant contribution in the field of aphasia.

Professor Howard is a trained speech and language therapist and neuropsychologist and a large majority of his research has focused around aphasia. With over 100 publications to his name David is a towering figure in aphasia research. He was one of the first to bring the insights of cognitive neuropsychology to the field of aphasiology, and particularly to the domain of therapy. As a result he has hugely added to our understanding of the nature of aphasic impairments and how to treat them. His more recent research has used advances in brain imaging to illuminate the neural representation of language. In addition to theoretical rigour David’s research has a strong focus on the clinical needs of people with aphasia. With colleagues at Newcastle University and elsewhere he has generated a legacy of therapy and assessment materials that are widely used by therapists both in the UK and beyond.

Professor Howard’s contribution to the setting up in 1999 of The North East (since renamed as The Tavistock) Aphasia Centre at Newcastle University has alos been recognised by The Robin Tavistock Award.  Now acknowledged internationally as a pinnacle of excellence, the centre offers intensive therapy to people with aphasia, provides cutting edge clinical education for SLT students and is leading research into the assessment and treatment of aphasic impairments. Most recently, the centre has supported the development of the North East Trust for Aphasia, known as NETA. This charity, run largely by people with aphasia, has become an independent, award winning self-help group that is inspiring others across the country.

When asked how he felt about being presented with the award, David said the following: “I’m delighted and honoured to be receiving this award. Much of the credit belongs to my friends and collaborators both in Newcastle and elsewhere. In particular, the success of the Tavistock Aphasia Centre North East and the North East Trust for Aphasia (NETA; a charity run by and for people with aphasia), both of which are based at Newcastle University, was a key contributor to the award. I’m hugely grateful to my colleagues at Newcastle University and many people with aphasia  for making these so successful”.

Congratulations Professor David Howard on behalf of staff and students in the Speech and Language Sciences department, Newcastle University.