This is the fourth instalment in our Courier Special Collections Guest blog series. You can see the other two instalments here; ‘1948-55 the early years‘, ‘Changing Directions 1955-62‘ and ‘1962-69 The Golden Years‘. 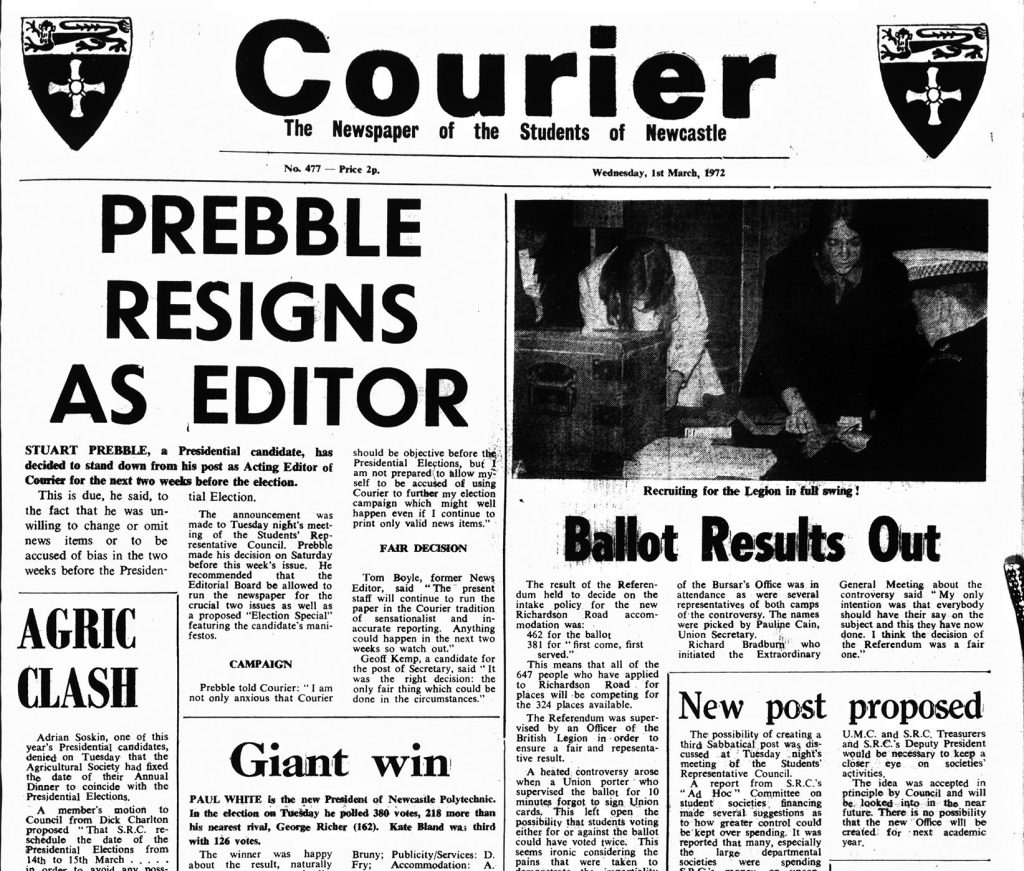 Rising printing costs forced the Courier to revert to eight pages in 1969, and for several years the paper suffered from staffing shortages. While it had always been difficult to find enough volunteers to maintain a high quality paper, the problem worsened in the early 70s, with the paper left without an editor at the start of the 1971-72 academic year. Stuart Prebble, who had recently joined as a news editor, was eventually promoted to the top job, but the paper remained generally understaffed for much of this period.

The Union itself was also facing difficulties, with a proposed merger between the SRC and Union falling through and an increase in violence and vandalism. The Courier was frequently attacked at Council meetings, with accusations of bias and a fall in standards commonplace. Both Grey’s Column and Geordie’s Marra were phased out in 1971, and the paper’s criticisms of SRC staff became more frequent and less subtle. 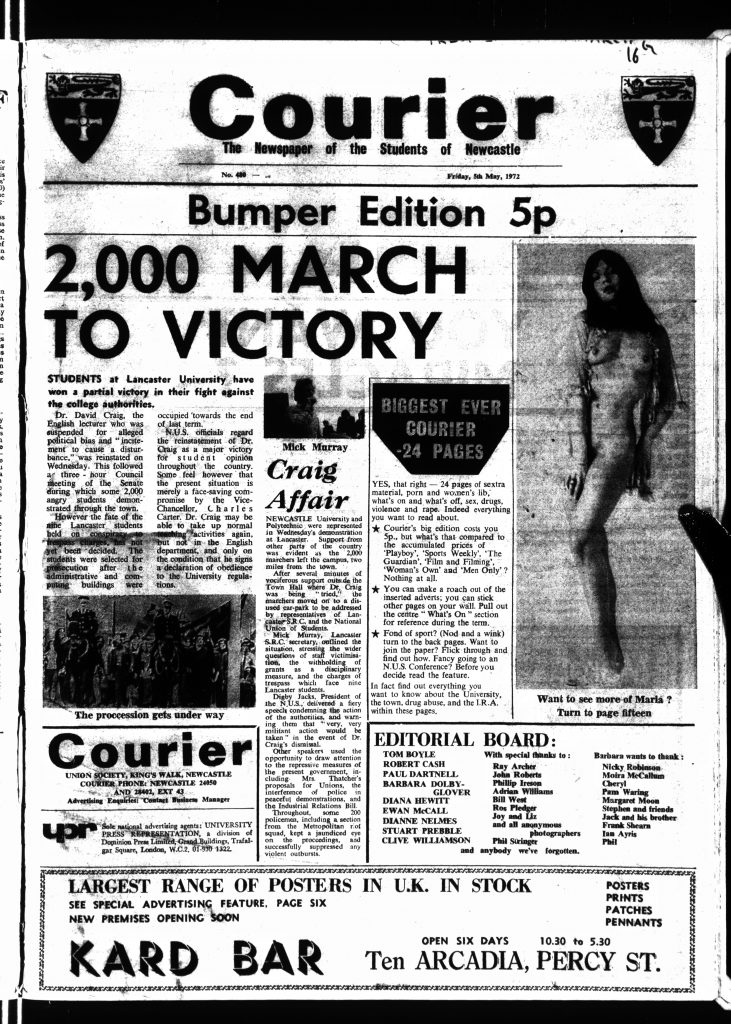 Prebble himself had resigned by this point, in order to run for President of the Union free from accusations of using the paper to publicise his campaign. His noble intentions were undermined, however, when his resignation appeared as the front page story of his final issue in charge, prompting ridicule even in the Courier letters page. His successor, Dianne Nelmes, was openly critical of Prebble in the Courier during his time as President, until she herself resigned due to work pressures in November 1972. She also went on to become President, while several other members of the Courier team rose to prominent positions within the SRC and Union. Despite, or perhaps because of, this close connection between paper and politics, attacks on the SRC in the Courier became more frequent and more personal, while the Courier was increasingly criticised at Council meetings. 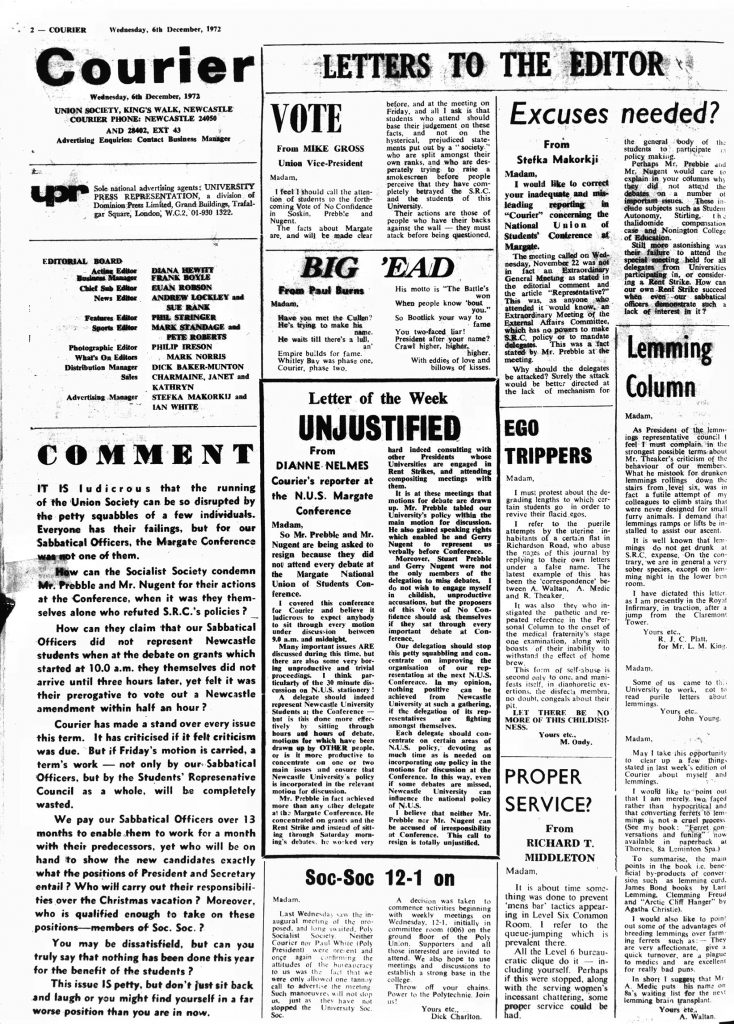 During her short time in charge of the paper Nelmes arranged for students of the new Newcastle Polytechnic to join the Courier‘s editorial team. The inclusion of the Polytechnic trident next to the University’s shield did little to mask the sidelining of Polytechnic news, however, and the scheme attracted criticism from both sides. After just four months the partnership collapsed and the Polytechnic students withdrew from the Courier to form their own newspaper in collaboration with local colleges. 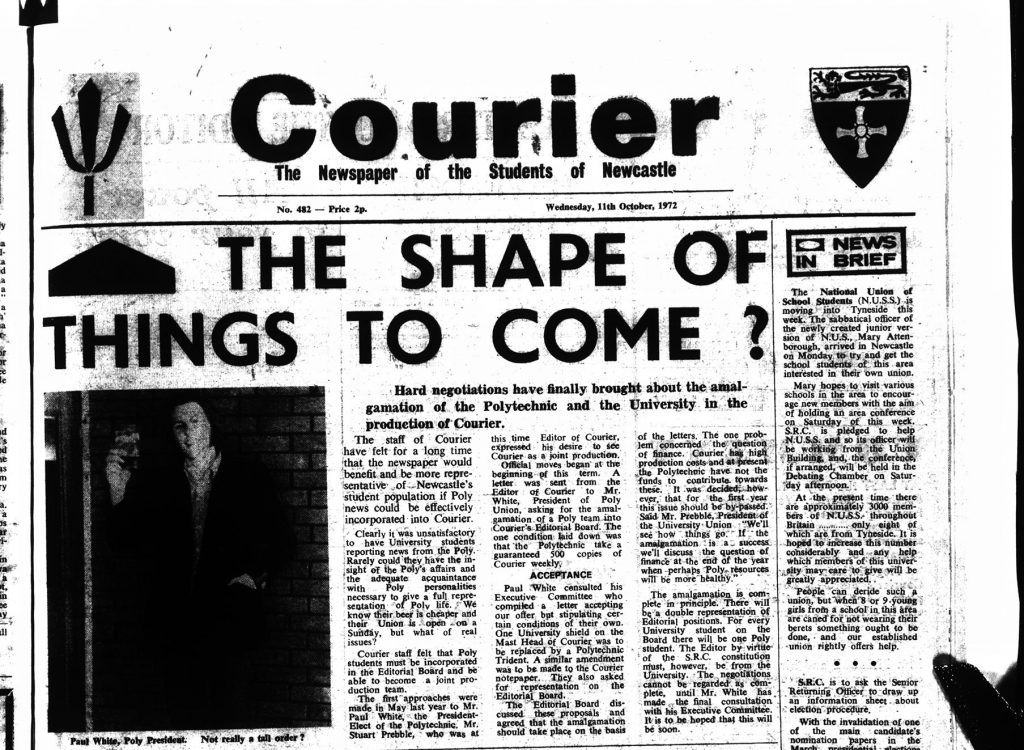 Courier with the Polytecnic trident and Polytecnic news, 11th October 1972

This was the least of the Courier‘s problems. Financial difficulties necessitated an almost doubling of the cover price between 1970 to 1972. Staff shortages remained a problem, and on several occasions pages in the Courier were filled with articles reprinted from other student papers or Times Higher Education. Meanwhile the letters page became a battleground between members of the Courier team, the SRC executive and the Socialist Society. The Courier‘s relationship with “Soc Soc” had progressively declined since the late 1960s, with the society forming a rival publication – called, naturally, Pravda – in 1971. “Soc Soc” and the Courier fought for control of the SRC executive, with personal feuds and petty rivalries also thrown into the mix to create a tense and tumultuous atmosphere. 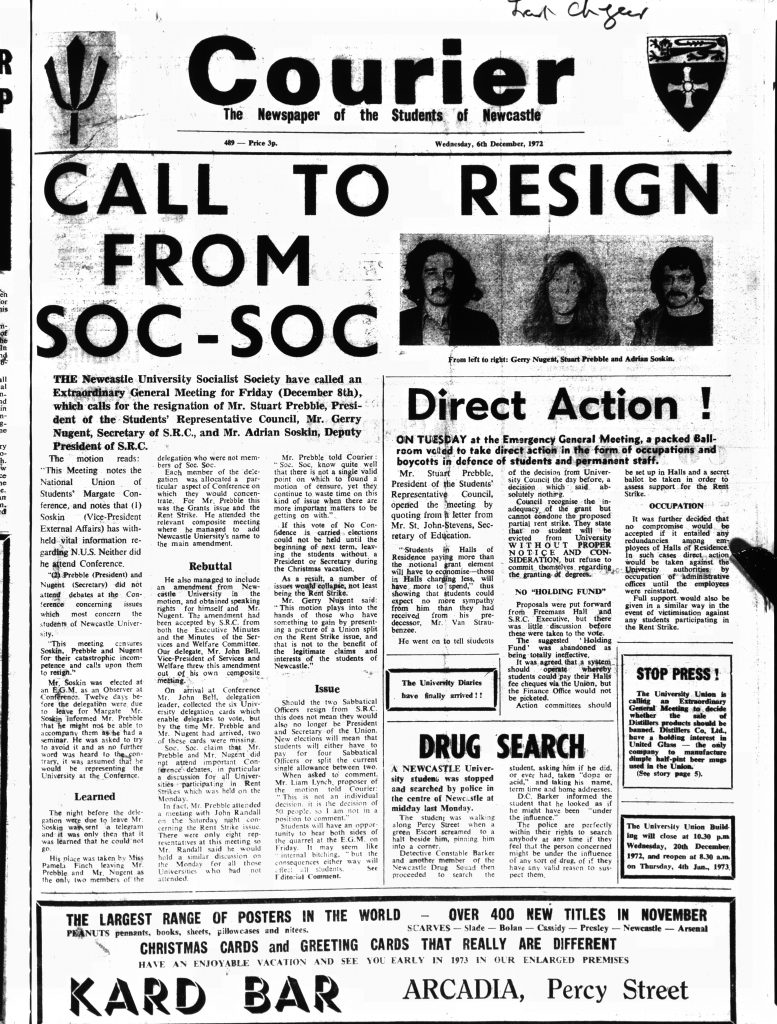