Each year the last weekend of January is time for the Royal Society for the Protection of Birds’ (RSPB) annual Big Garden Birdwatch. It’s a time when we’re all encouraged to go and count the birds we see – maybe in your garden, from a balcony or window, or in a local park, and submit the results online. The initiative helps monitor the bird population in the UK.

There’s lots of opportunities to spot birds and other wildlife in the North East of England, and our archives and rare books reflect people’s interest with the natural world across history. One example of these is this fabulous bird illustrations from our Crawhall (Joseph II) Archive.

Joseph Crawhall II (1821-1896) was a businessman, artist and patron of the arts. His artistic achievements including wood engraving, watercolours and contributions to Punch magazine. The pursuits of himself and his family contributed to the thriving cultural environment of 19th Century Newcastle.

However, the illustrations we’re highlighting here were not created by Joseph. They are pages from illustrated diaries and sketchbooks attributed to his brother, George Edward Crawhall (1821-1896). This generation of Crawhall siblings were all artists – George and Joseph but also brother Thomas and their sister Jane. George’s legacy is not as celebrated as his brother Joseph’s, but he also contributed to some of Joseph’s most famous works, including the Compleatest Angling Booke, for which George contributed the trout tail which features at the end.

These diaries/sketchbooks reveal George’s travel in England and Scotland between 1867 and the 1890s. Many of the images depict scenes from the North East, such as the image below of a coot and moorhen fighting in Brandling Park – just around the corner from the Philip Robinson Library, home to Newcastle University’s Special Collections and Archives.

The diaries record many of scenes of hunting and fishing, alongside natural history studies. Birds feature heavily, although frequently under the gaze of armed hunters.

The beautiful circular designs featured in this blog post each showcase a different bird native to the UK, and were likely intended to appear on decorative plates.

Will you see any of these birds in this year’s Birdwatch?

You can read more about the Big Garden Birdwatch and sign up to participate on the RSPB’s website.

You can read more about the fascinating Crawhall family history and their relationship with the North East in this blog. 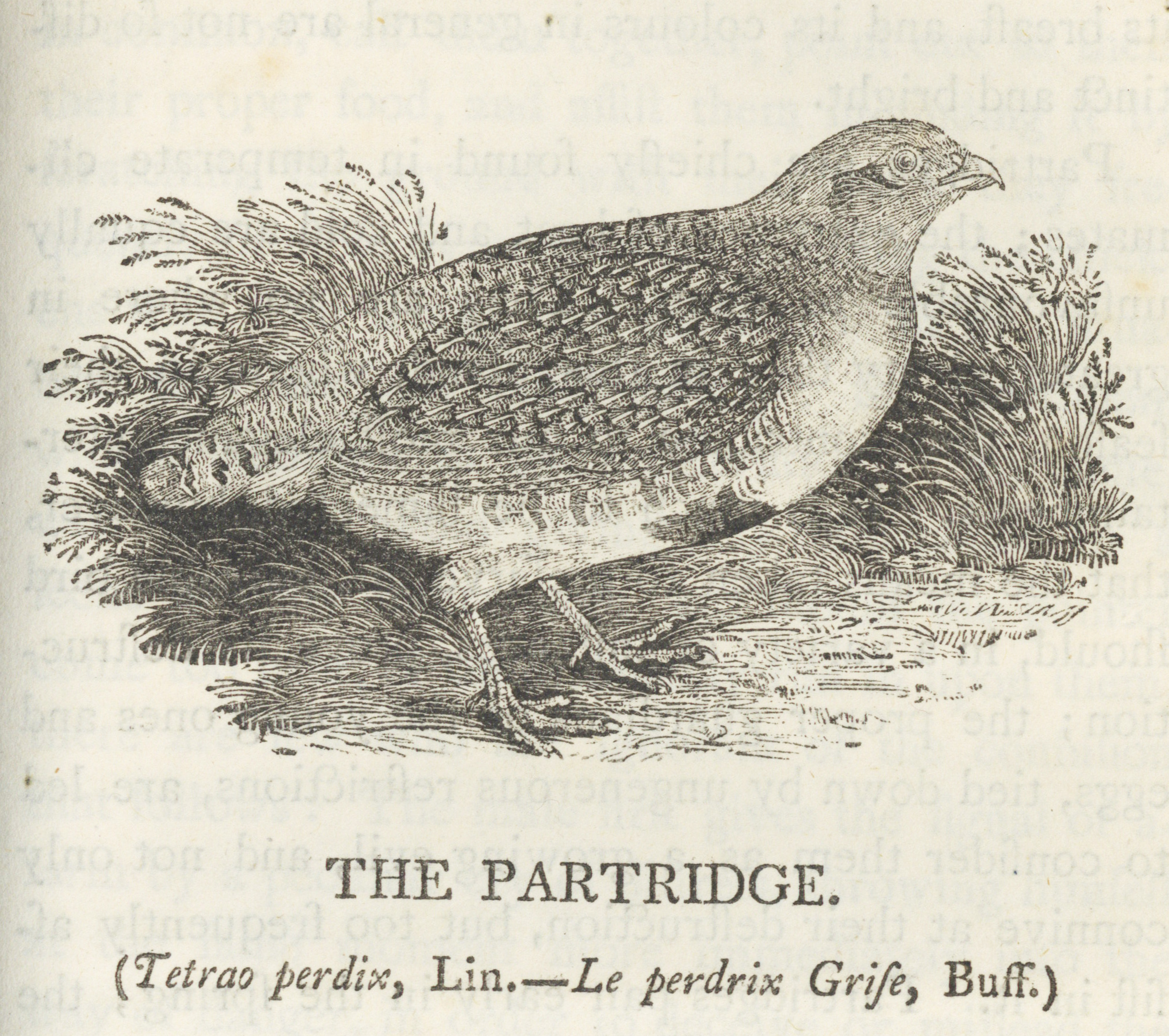 ‘The Partridge’ from Thomas Bewick’s History of British Birds, Vol I (761 BEW)

To start off our Special Collections #ChristmasCountdown is an image of The Partridge from Thomas Bewick’s History of British Land Birds, Vol I.

“The length of this bird is about thirteen inches: The bill is light brown; eyes hazel; the general colour of its plumage is brown and ash, elegantly mixed with black…Partridges are chiefly found in temperate climates; the extremes of heat and cold are equally unfavourable to them: They are no where in greater plenty than in this island, where, in their season, they contribute to our most elegant entertainments”. (pg. 305-306)

If you are interested in more items by Thomas Bewick, view more in the Bradshaw-Bewick Collection.