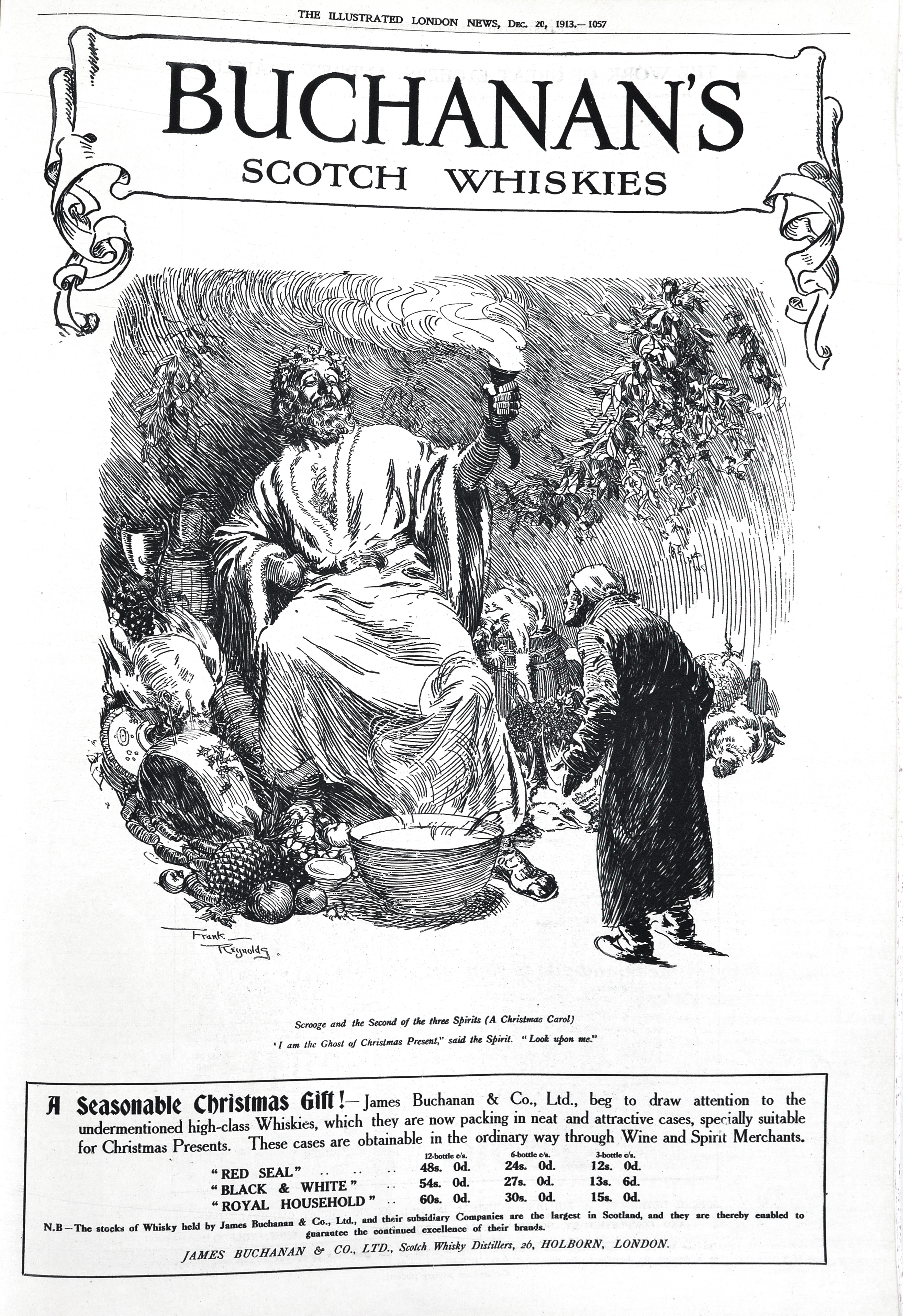 Illustrated London News contained lots of advertisements. This page is advertising scotch whisky and states that it is ‘suitable for Christmas Presents’ and uses an image of Scrooge and the Ghost of Christmas Present, from Charles Dickens’ A Christmas Carol. 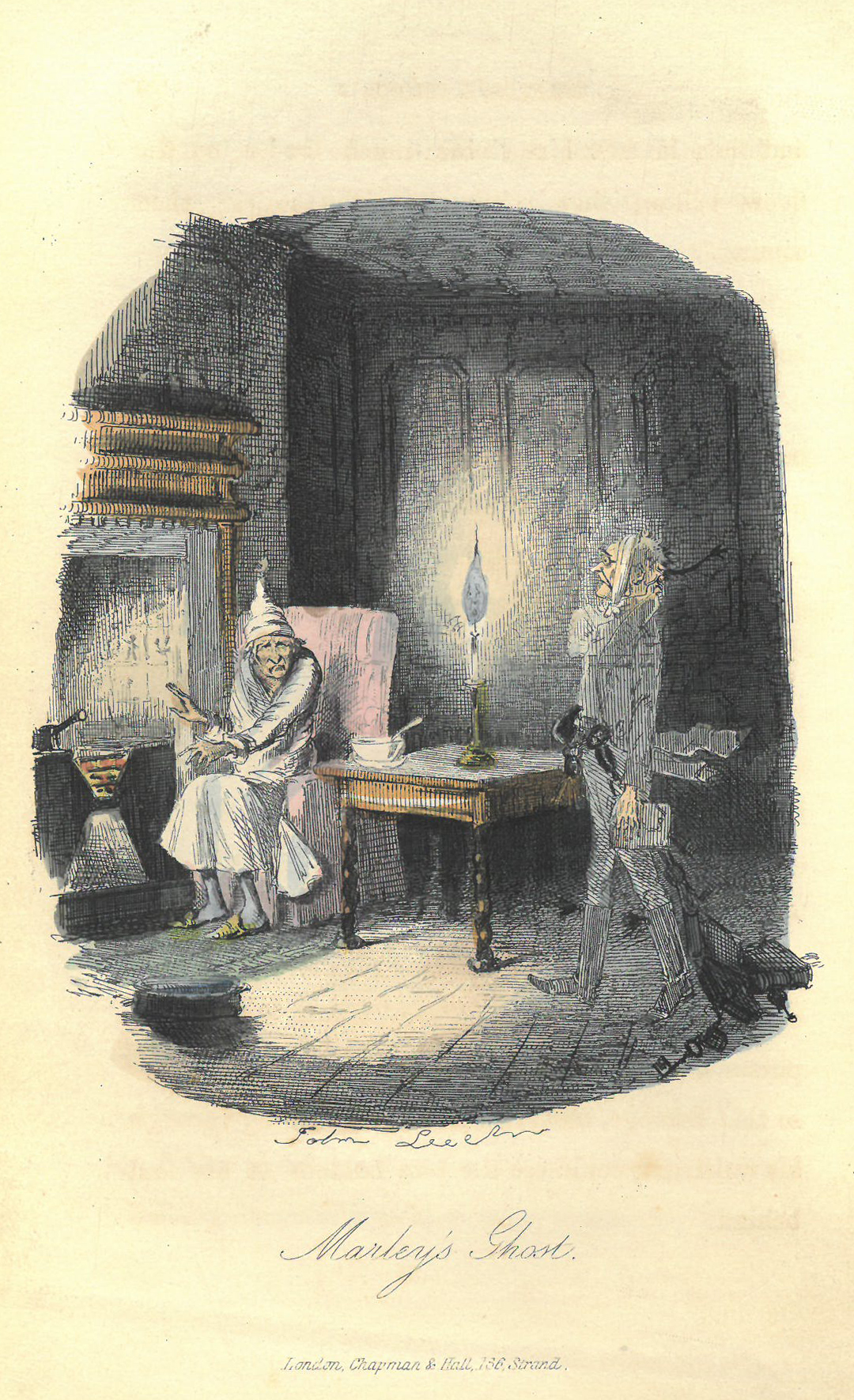 Extract and image are taken from A Christmas Carol: in prose: being a ghost story of Christmas.

“How now!” said Scrooge, caustic and cold as ever. “What do you want with me?”
“Much!” – Marley’s voice, no doubt about it.
“Who are you?”
“Ask me who I was.”
“Who were you then?” said Scrooge, raising his voice. “You’re particular – for a shade.” He was going to say “to a shade,” but substituted this, as more appropriate.
“In life I was your partner, Jacob Marley.”

Jacob Marley is a ghost who appears in Charles Dickens’ A Christmas Carol. He is Scrooge’s deceased business partner, now a chained a tormented ghost, given as punishment in the afterlife for his greedy, selfish and uncaring attitude when he was living. Marley arranges three spirits to visit Scrooge (Ghosts of Christmas past, present and future), offering him and opportunity for redemption.

Find the book for yourself through Library Search.
Check out other items from the 19th Century Collection here.

7th February 2012 marks the 200th anniversary of the birth of Charles Dickens, regarded by many as the consummate Victorian author.

He began his career in journalism, writing for the journals The Mirror of Parliament, The True Sun and later, The Morning Chronicle. The contacts he made in the press industry enabled him to publish Sketches by Boz (1836): a collection of short portrayals of London characters and scenes which were illustrated by George Cruikshank and had previously been serialised in popular newspapers and periodicals.

John Macrone first published Sketches as a two-volume set in February 1836 and followed it with a second complete series in one volume in August that same year. It is a work of both non-fiction and fiction.

The social ills of the Nineteenth Century such as child labour, the Poor Law and the poor treatment of London’s waif-children are recurrent themes in his novels.

In The Adventures of Oliver Twist, 1837-39 (19th Century Collection, 19th C. Coll. 823.83 DIC) workhouse conditions, the recruitment of children as criminals, the social effects of industrialisation, London slums and the hypocrisies of the middle-class come under particular scrutiny.

Dickens first visited America in 1842, his impressions of which are described in American Notes. He was already popular in the U.S. and was mobbed on arrival. Here his interest in social reform continued and his itinerary included visits to prisons, factories and hospitals. He was also saw first-hand the effects of slavery and was a vehement campaigner for its abolition. The trip was both a success and a disappointment: he wearied of the attention he attracted, failed to persuade Americanc of the need for an international copyright agreement, and was unimpressed by the level of information put out by the press. The success of the British reading tour and the prospect of large profits motivated him to visit America again in 1867 but by this time his health was failing and he did not travel far.

Many nineteenth-century authors established themselves through writing serialised fiction. That is, the issuing of instalments in newspapers, like the Illustrated London News, and popular magazines, like The Strand, or, as ‘part serials’ i.e. discrete monthly parts. Serialisation impacted upon the novel form: the more an author wrote the more handsomely they were paid but there was also a need to engage readers with every instalment and authors like Dickens adapted plots according to reader responses. Serialisation made book-buying affordable for the middle-class because it spread the cost of purchasing a novel over an average of eighteen to twenty months, with each instalment selling at an average of 1 shilling – a little over £2.00 in today’s spending worth. Typically, when the final instalment had been acquired, the parts were stripped of their paper wrappers and advertisements, trimmed and bound in leather or fine cloth. Thus it is rare to find novels as part serials today. The copy of Little Dorrit (see image at the beginning of this post), 1855-57 (Rare Books, RB823.83 DIC) which is held in the Rare Books collection is a good example of a book in parts. The parts are stab stitched, with paper wrappers intact, marked with the price and some of the parts bear the inscription of a former owner and the stamp of Holden bookseller, Church St., Liverpool. It offers an opportunity to experience the text as the contemporary readers would have experienced it, with a greater number of illustrations (by H.K. Browne) and the cliffhangers at the end of each part.

Dickens’ final novel, The Mystery of Edwin Drood, 1870 (Rare Books, RB823.83 DIC) remains unfinished. There are no clues regarding an intended ending in the notes which Dickens left although he sent a summary of the story to his friend John Forster. He died from a stroke, having completed a full day’s work on the novel. The sixth instalment was the last to be published.