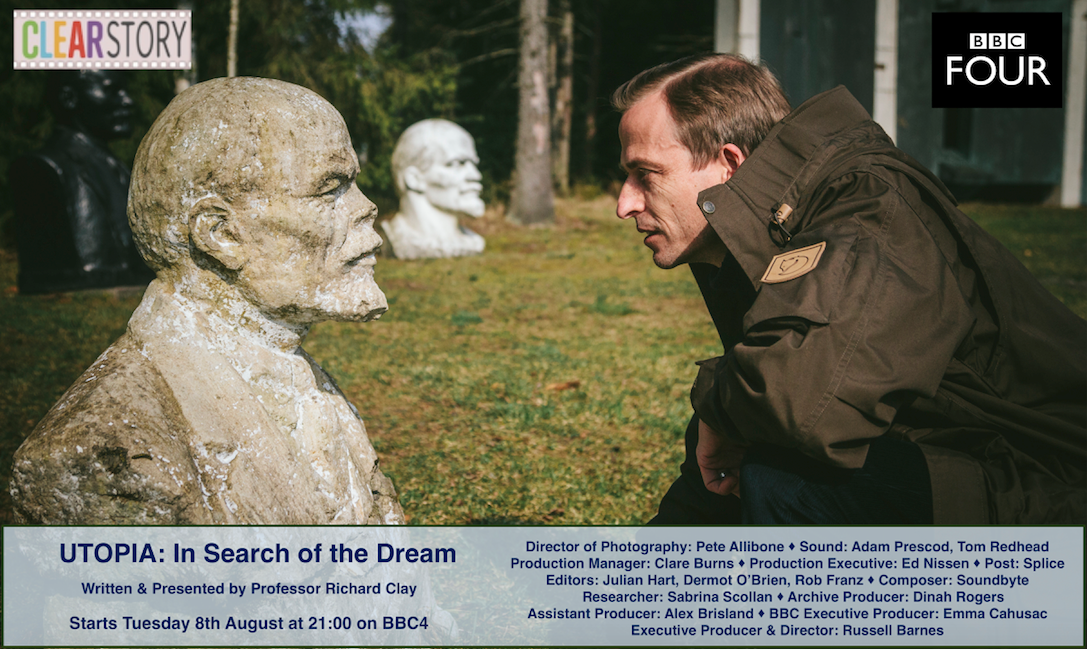 What kind of utopias do children imagine? In July, Newcastle University’s Professor Richard Clay is hosting Utopia: In Search of the Dream, a new three part documentary on BBC Four – featuring Seven Stories: The National Centre for Children’s Books!

The documentary, which will begin on Tuesday 8th August at 9pm, explores the concept of utopia by looking at this from a range of different perspectives. From Thomas Moore’s sixteenth-century coining of the term, to Newcastle’s own Thomas Spence, Soviet spa towns, wikipedians, feminist theatre, Steve Reich, Minecraft, Star Trek and beyond, the series is certainly wide-ranging.

Richard Clay, Professor of Digital Humanities in Newcastle University’s Faculty of Humanieis, Arts and Social Sciences, explains how the opportunity to curate Utopia came about: “I’ve done a couple of BBC4 documentaries in the past (The French Revolution: Tearing up History and A Brief History of Graffiti) and a production company approached me and said they’d been commissioned to make some films about utopia for the BBC with me writing and presenting. At first I thought it’s just too big a topic, spanning historical periods and cultures. But I concluded that it’d be a fascinating subject to explore and an amazing experience to film – which it was, especially the time we spent with young people at Seven Stories. Their vision and principles made me wonder whether Jean-Jacque Rousseau was right back in the eighteenth century – we’re born utopian and then corrupted by society…”

He invited Matthew Grenby, Professor of 18th-Century Studies in Newcastle University’s School of English Literature, Language and Linguistics to participate in the documentary. Professor Grenby’s research interests lie in children’s literature and culture in the eighteenth and early nineteenth centuries.

Professor Grenby led a workshop at Seven Stories with a group of Year 5 children from West Jesmond Primary School to explore how both historical and contemporary children’s books influence children’s visions of alternative worlds. Using the concept of utopia as a starting point, the children created drawings and talked about the other worlds they conceived of.

Professor Grenby said: “Seven Stories was the perfect venue for filming, being itself a sort of utopian vision of what a child-friendly museum of children’s books can be.

The children from West Jesmond Primary School were fantastic. We asked them to draw pictures of their own personal utopias. The results were really wonderful. Waterworlds, worlds floating in the air, a city situated on a gigantic flower, with different zones for different grades of celebrities. When we asked the children what the rules would be in their utopian societies, there was a definite air of radicalism. One girl said that cars would be against the law. Another said there’d be no kings or queens! One of the boys said that everyone would have to do at least half an hour’s sport every day.

But not all of these fantasy worlds were happy places. In one girl’s vision of the future, all the people were sad because they had to live in the sea, and all the fish were unhappy because they had to live on the land. It was a remarkable insight into how utopian thinking gives a really direct insight into people’s most pressing concerns in the now.”

“Dystopias are a trend in contemporary children’s literature – with titles like The Hunger Games and Divergent dominating bestseller lists – so it was really interesting to watch the young people discussing utopias with Professor Grenby. Books can help children to identify with and shape the world around them, and exploring utopian worlds provides positive models for children to explore how society might develop in the future.”

And I’ll leave it to Professor Richard Clay to have the last word: “the whole crew loved filming at Seven Stories. So big thanks to your team, that great school, and those fab youngsters. The sequences we shot look wonderful!”

I’m looking forward to watching the documentary, and if you miss it tonight, then make sure you catch it on BBC iPlayer!