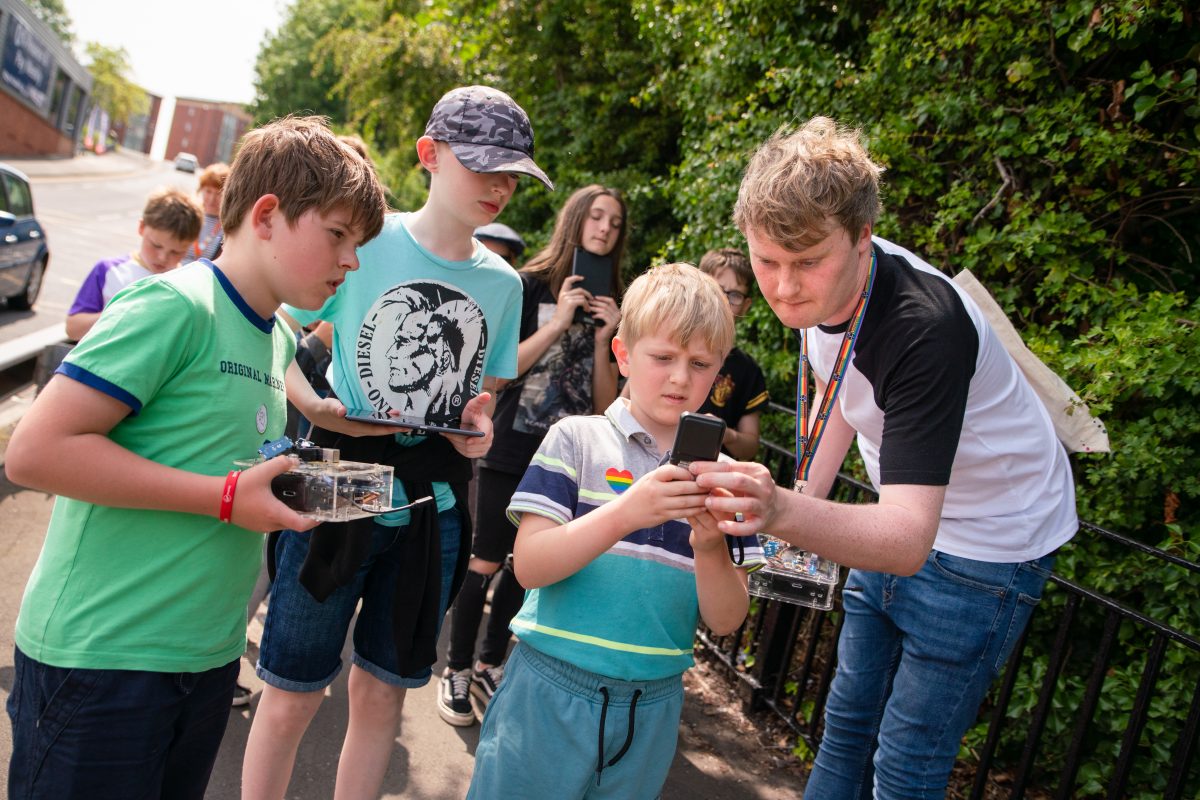 In this post, part of which was originally published on The Conversation blog, Newcastle University researcher Sean Peacock talks about his research and the Sense Explorers events he is leading at Seven Stories: The National Centre for Children’s Books from June to August 2019. Sean is an EPSRC-funded PhD student in Digital Civics in Open Lab, part of the School of Computing and his research interests centre on the ways in which technology can support children to participate in placemaking.

Air pollution has a particularly damaging effect on children. They’re still growing and breathe faster than adults do. They also live closer to the ground, where the most polluting gases from vehicles accumulate. Pollution from traffic has been linked to problems with brain development, stunted growth, respiratory conditions, cancers and 300,000 child deaths worldwide.

Children themselves are far from oblivious to all this. The school climate strikes show that young people are forcing air pollution and the climate crisis to the top of the political agenda. The strikes tell us that children demand a platform to challenge pollution in their environment. Unable to voice their concerns in school, they are forced to take radical action. What if instead there was a way to work with children in tackling air pollution and climate change?

Through my research, I look for ways that we can give children the tools, the skills and the confidence to affect change in the cities they live in. With the help of teachers and my colleagues in Open Lab, we’ve come up with Sense Explorers, a toolkit of activities and resources to involve young people in transforming places and the environment.

And this summer, I’ll be delivering four free Sense Explorers workshops with Seven Stories! As part of each workshop, we’ll be exploring spaces around the Ouseburn. Using some digital tools we’ll be collecting data about air pollution, and we’ll also be asking young people to think about what their own five senses are telling them. Can they see or hear what may be causing pollution?

Then looking at this data, we’ll be asking our Sense Explorers to think about what they would do to make the Ouseburn better. I can’t wait to see what ideas they come up with!

Here’s a video about our Sense Explorers workshops at Seven Stories:

Sessions like Sense Explorers help children to learn about the future, what it holds for them, and how they can make it better. We should be showing them what they can – and should – do to make their cities less polluted places.

Urban planners and politicians are often hesitant to work with children, but they shouldn’t be – we need to embrace their creativity and passion to take radical action on air pollution and climate change. More now than ever, we need the original ideas that only children can bring.

Thanks Sean, and to The Conversation for allowing us to republish this content. The four Sense Explorers workshops are now fully booked. We are considering adding some extra sessions so do book on our waiting list (available on the event booking page) and we will let you know if spaces become available.