At the moment, our main method of communication is e-mail via mailing list. This works for the current volunteers, but I’m worried it isn’t attractive or welcoming for newcomers.

It’s high-volume mailing list, and managing high volume  lists is a bit of a lost art. I’ve just taken a look at my “cs-history” mail folder, which goes back to 2015. I have 2,577 messages, totalling 462M of storage. So whenever I recommend to people that they subscribe to the mailing list, I also strongly suggest setting up mail filters to keep the list out of people’s inboxes.

So I’m wondering: should we be doing something else? Are you interested in taking part, but put off by the mailing list? Should we tweak its settings: perhaps open up the archives so non-subscribers can read them? Do you have a suggestion for something else we should try? Please either email (heh) me suggestions or leave a comment on this blog post.

(I sink to the depths of the rest of the media by using a punning title. But it’s a good pun.)
Yesterday Dr Clive Gerrard (retired Assistant Director, Computing Service) and I (John Law) moved the front console of the IBM 360/67 from Claremont Tower to the USB, in preparation for the 360-themed display which, it is hoped, will open in the first week of November.

The console (which fronted the CPU of the mainframe) moved into Claremont Tower, along with about 12 tons of the rest of the computer, in August 1967. The mighty machine was decommissioned and scrapped in 1984. Roger saved many parts, among which the front console was the prize exhibit.  The console lived in various places for the next 34 years, until yesterday.

Today (5th October) is the last working day of NUIT in the Claremont Building: next Monday all staff move to Black Horse House (behind Civic Centre) — for good.  This ends 51 years of Computing’s association with Claremont Tower  …. but not quite!  The Computer Room in the Sub-Basement remains intact (as it had to), and systems staff will continue to visit it. For the foreseeable future. 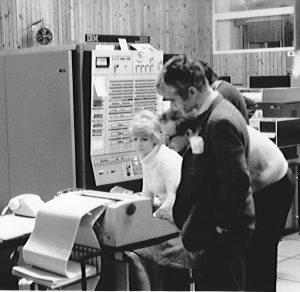 This was taken in the very early 1970s. Console at work! Or rather not: the lovely Ada is surrounded by concerned System Programmers: a glitch has occurred, work has come to a halt. Keith Barnett and Pete Whillance are the two SPs that we can see. 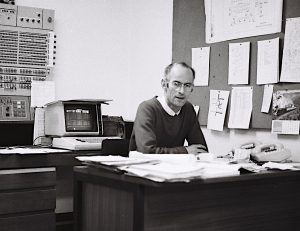 The console spent most of its retired life (so far) in Roger Broughton’s office. 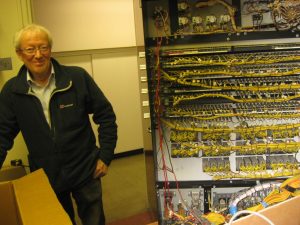 An unfamiliar view, of the back of the console. See the wonderful work of IBM’s engineers in designing and bulding this thing of beauty. Clive and I are about to pack it up … 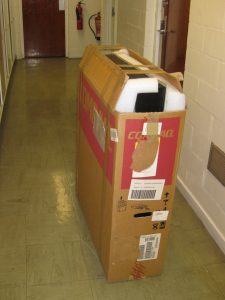 … in its bespoke transportation crate. 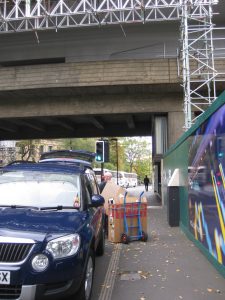 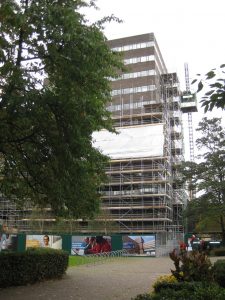 And so we leave Claremont Tower to Sir Robert McAlpine… 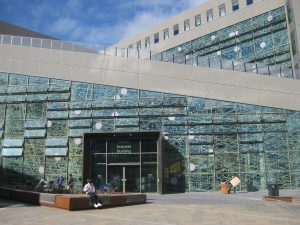 … for the bright open spaces of the Urban Sciences Building, at The Helix.