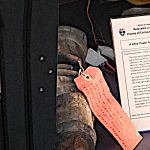 It’s the bit of cable (7.1Kg in weight) which shut down NUMAC’s computers in 1985. It’s one of our artefacts, and it’s now on display here … 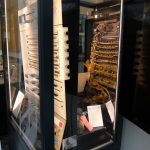 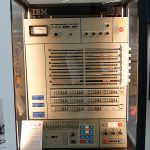 … behind the CPU Console of the IBM S/360-67, the Computing Laboratory’s first giant mainframe, now on display in the Urban Sciences Building, home of the School of Computing. The display was inaugurated in grand style on 13th June 2019: a Day of Celebration entitled “50 Years of Campus-wide Computing“.

Yes, the 360-67 arrived in 1967 … but it was in 1969 (i.e. 50 years ago) that we started to run the machine under the Michigan Terminal System, which proved to be a quantum leap forward for computing services at Newcastle (and Durham) Universities. MTS paved the way for time-sharing systems: we ran it extremely successfully (on different mainframes) for 23 years.

We welcomed about 100 guests to the event, some of them rather prestigious, and unveiled the first four cabinets of exhibits from the Newcastle University Historical Computing Collection – two of them comprising items pertaining to the 360-67.

The great thing about the day was that this story was told by the people directly involved: Professor Page, Mike Alexander (University of Michigan), Elizabeth Barraclough, and Professor Brian Randell.

You can read an informative report, and you can see a (subtitled) video of the speakers, at our special page, which is now available: please do have a look (and let us know of any improvements you’d like to see!)  https://blogs.ncl.ac.uk/cs-history/inauguration-day/