It’s ages since I made an entry in the Blog, so I’m adding a little one (and 7 pics!) to remind you that it exists. Another, more important entry, is currently in preparation, describing the marvellous success of our Official Inauguration on the 13th June. (Frantic catching-up on other things, on the parts of all concerned with that success, has delayed the writing of that blog entry.)

Meanwhile, here’s another little gem, found just last Friday in the heaps of papers in Roger Broughton’s old office. This one is a letter describing how the IBM System/370-168 was to be delivered early in 1975: it’s a tiny, but classic, example of planning by the Operations Manager (i.e. Roger).

It is a letter to the City Police dealing with how Claremont Road was going to need special traffic controls when the new mainframe was to be delivered. Roger contacted the Police, they sent along a couple of chaps, discussions ensued, involving an IBM rep. as well, and conclusions were drawn which are described here. Installation of a mainframe was planned like a military operation.

We always go on about what a revolution the previous mainframe (the S/360-67) was, and what a monster of a computer it was. And indeed it was, as described by the speakers on Inauguration Day.

A bit of a contrast to that phone in your pocket, whose uncanny powers, as we observe the 370 arriving, resemble a gargantuan alien spaceship looking down from the heavens on medieval peasants ploughing their fields. (Purely, need I add, in terms of computing power!). 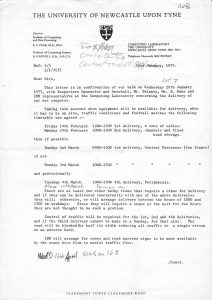 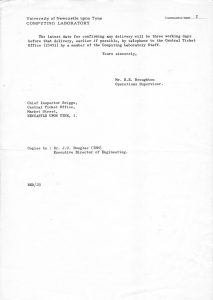 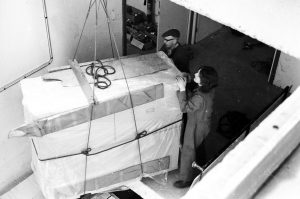 (Well we know what date this was.) 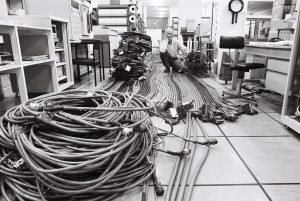 Just so you know what mainframe cables looked like. (Roger is actually sitting on the cables taken out from the Amdahl in 1992, but it gives you an idea of what came in that first delivery, above.) 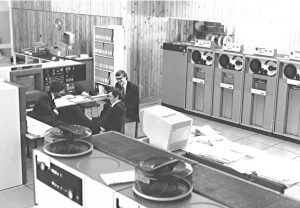 What nice-looking  young men, with all the world ahead of them! My guess is that they are IBM Engineers, commissioning the 370. 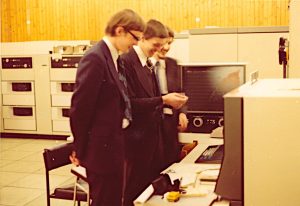 I had to put this one in too: they were obviously having a great time. 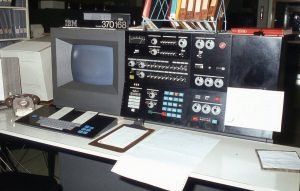