To turn schools inside out, develop a localised community curriculum, argues Professor David Leat from the Research Centre for Learning and Teaching (CfLaT), School of Education, Communication and Language Sciences. To read other Ideas for an Incoming Government, view the entire series hosted by the Newcastle University Institute for Social Renewal blog. 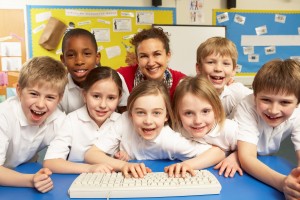 We have a national curriculum which lays out what should be taught to school pupils.  When the National Curriculum was first introduced the mistake was made of cramming in too much content and successive reviews have chipped away at this content.  However it is increasingly recognised that schools need greater freedom to offer a curriculum that is locally developed to reflect local resources, issues and needs for a proportion of the school week.  We need a policy which allows and supports schools, in partnership with local stakeholders, to develop a localised community curriculum.

Schools should be able to apply to the DES for licence to devote between 20 and 40% of their school year to curriculum which is developed locally in partnership with community stakeholders which would include businesses, community organisations/charities, specialist societies, public services and universities.  The submitted plan would include the aims of such curriculum work related both to the goals of National Curriculum and to individual school aims and characteristics of the region/locality.  Once accepted the plan would be included in the school inspection remit.  Relevance comes from the meaningful work that is produced by the students which will address many of the challenges facing schools in relation to motivation, behaviour, transitions and wider educational outcomes (such as self-concept and resilience).

In practice schools would establish a community curriculum advisory group (CAG)which would advise and assist in developing inter-disciplinary, challenging and authentic projects for the students.  The advisory group would consist of 5-12 members (larger in large secondary schools) drawn from the constituencies outlined earlier, but including one or two governors.  Many might be parents and there should be a minimum of one from the business community and one from the culture/arts sector.  The school would have the final say about the composition of the CAG.  The aim of the CAG would be:

The school could also submit an application for a community curriculum award at one of three levels (for the sake of argument: bronze, silver and gold).  Such an application would have to include evidence of the wider learning outcomes for the students, and of the ‘products’ generated by the students validated by users or others in the community.

There would be teething troubles over how representative CAGs are and it is important that schools have control of their composition, so that they do not feel that they are being ‘done to’.

A Demos report (Sodha & Gugliemi, 2009), detailed the disaffection and alienation evident amongst young people of school age, and the harm that they encounter.  Recently, an Independent Advisory Group, coordinated by Pearson, recommended that England must adopt a framework of key competences such as that developed by the European Union (e.g. learning to learn, working as part of a team and intercultural competence) AND a recognition of vocational learning for ALL students (Anderson 2014).

The RSA have produced a report (Facer 2010) which summarises the literature relating to ‘Area Based Curriculum’ and reporting on two ABC projects in Manchester and Peterborough.  The outcomes in Peterborough, where Curriculum Development Partnerships were pioneered included:

In the US there is a substantial resurgence in interest in Community Education (although with a greater involvement of social workers that we are suggesting) and here the evidence is for far greater engagement.  ‘High Tech High’ in California has a very high profile and reputation for project based work, often but not always, linked to the community (http://www.hightechhigh.org/about/results.php).