Every year, the AUA (Association of University Administrators) hosts their Annual Conference and Exhibition, which gives those working in higher education the opportunity to attend sessions delivered by specialists and leading practitioners, share ideas and best practise, and learn about the latest sector developments. Their AGM is also hosted at the Conference.

This year’s AUA Conference and Exhibition was held on the 15th and 16th April at the University of Manchester and the theme was Higher Education – Fit for the Future? It focused on some of the challenges and inequalities in higher education and what changes must be made to prepare for the future. 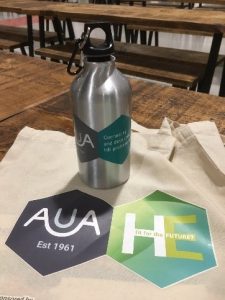 Malasree Home, FMS’ Athena SWAN Support Officer, has written about her experiences at this year’s Conference:

I have to secretly confess that, on that Monday morning, I was really excited for the ASA Annual Conference, and that it was the fantastic conference freebie – the AUA water bottle – that did it for me. The remainder of the two days could only get better!

As with most AUA conferences, there was something for everyone. The plenaries and keynote sessions were really interesting, focussing on the challenges ahead for the HE sector and the implications that this may have for management and governance in HE institutions. Here’s a quick run through some of the bits that I really enjoyed, and the things that made me think.

I thoroughly enjoyed the keynoted delivered by Jess Moody from Advance HE. Jess talked about the balance between ‘Excellence’ and ‘Equity’, and the challenges across the sector, especially regarding student attainment, and the fact that, while HE institutions work towards gender equity, there are often discrepancies with regards to other protected characteristics. Jess focused on the need to integrate EDI and Widening Participation more, but also raised a point that I found fascinating – can ‘data’ allow us to intervene, and what are the ethics surrounding that? 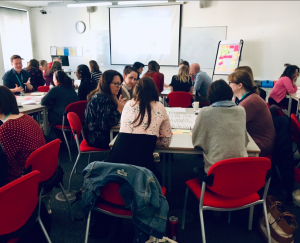 While I was disappointed that one of the sessions that I had signed up for was cancelled at short notice (‘Looking Behind the Label – Mental Health in the Workplace’), it was great to think outside the box in two sessions focusing on a positive workplace culture. One discussed the GROW model of coaching, while the other (fantastically titled ‘Yoga and the Hokey-Pokey’), focused on how teams can think creatively to enable solutions.

Though a bit bleary eyed after the AUA Gala dinner (though I have to confess that I called in a relatively early night) I also found the session on ‘Leading Change from the Bottom Up’ fascinating – the session presenters took us a through a successful restructure of a department to streamline processes. Change, in itself is a very pertinent topic in Higher Education, with almost every organisation going through some form of change at any moment in time, on a variety of scales. Yet, while relevant, it is also an uncomfortable topic, and the presenters showed consummate skill in not just describing the intricacies of their scenario, but also fielding the questions from the audience. 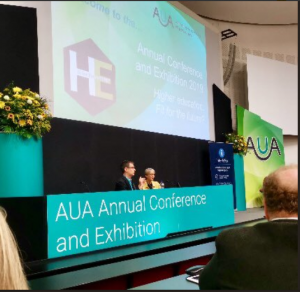 Indeed, it is the sheer variety of topics that makes this conference so interesting. As a participant, you can dip your toes into areas of HE that might not be your role, yet still come back with insights that can then be pertinent to how you do your day job! It also gives you an idea of the breadth of change and challenges in the sector. Even as I write this blog, I realise that a lot has changed since the event itself, especially with the Augar Review of post-18 education having been launched on the 30th May.

However, it will be remiss of me not to mention the icing on the cake – the AUA Conga. I was too chicken to join in, but it was great to watch. If you don’t believe me, check out the video on the AUA twitter! Enough said.

If you like the sound of these sessions and feel like getting involved, next year’s conference will be hosted at the University of Nottingham on the 6th and 7th April 2020. See you there!