I was asked to write a blog about my election as a Fellow of the Royal Society. I start by apologising for my ineptitude compared to the “professional” social media people in the Institute. So, what to say? Well, maybe the process might be of interest.

How do you get elected as an FRS? 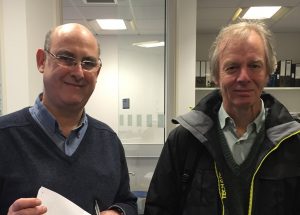 You need to be proposed and seconded by current FRS’s. Jeff tried twice to propose me before I went to the USA and a third time (September 2012) upon my return, at which point I said OK. I had to generate a full CV, list 20 papers and include PDF versions of these articles, and the proposers were required to write a three page narrative on my research.

Every year material is updated. The first year I wondered what feedback I might get but I soon realized that no one says anything to you. I rapidly put the issue to one side and did not give it any thought. 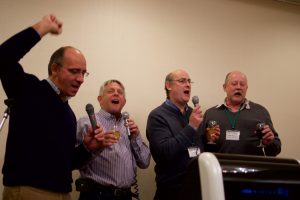 Looking back on my research it’s evident that most of my science was done with collaborators who are much smarter than me. So, I consider myself to be extremely fortunate to have worked with these people.

The talented people currently working in the Gilbert/Bolam labs

In late March of this year, I received a letter from the Royal Society marked “In strictest confidence“. I assumed it was yet another reference for someone applying for a grant to the Royal Society and I thought “another job to do”. I read the letter several times and the words “you are on the list of candidates submitted to become an FRS” was hard to digest. When it said you needed 2/3 of the votes to be elected, I became dubious about my chances. On speaking to Jeff, he explained that only one person in the last 150 years has failed to become an FRS at this stage. I was thus confident that not even I could screw this up. 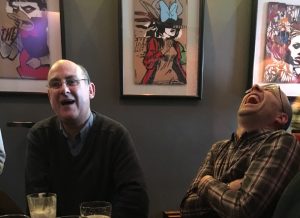 However, keeping it secret for a month before the election took place was extremely hard as I don’t do secrets. I did, however, tell Rosie, my wife, who initially shared my excitement of the news. Her enthusiasm waned somewhat as I kept on about it at home for a day or two. At this point, Rosie said “I hope you don’t become too grand” which ceased any talk about the FRS. I am pleased to say that Rosie’s excitement was rekindled when she realised that she will likely get the opportunity to meet Brian Cox (who also became an FRS this year) who she rates as “very dishy, particularly for a scientist”.

How does it feel to be an FRS?

What are my thoughts about being an FRS? Well, shocked but also excited, although I feel a complete fraud. 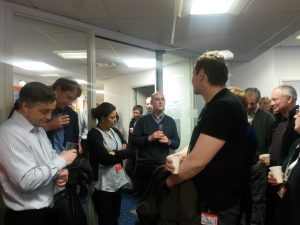 Prof Gilbert’s speech to his colleagues at ICaMB

I was very pleased that so many people were able to come and celebrate with me on Friday, I would like to thank you all for coming. I also hope that people will think that “if Harry can become an FRS then the bar is not so high”, and that this will result in other people becoming Fellows in the next few years. In 30 years at Newcastle, I have never worked in a place with so many talented people, and it is clear that ICaMB merits more than two Fellows of the Royal Society.