We really couldn’t work without the help and assistance of the locals in and around Lufton and we’re really grateful for everyone’s efforts on our behalf.   In particular our friends Maggie and Colin are kindly hosting the excavation team on their farm this year and have gone to extraordinary lengths to prepare for our arrival.

The marquee (complete with wifi access!) will make life on camp much more comfortable! “X” never, ever, marks the spot. Seventy percent of all archaeology is done in the library

and in many ways Indy was right. We’re most visible when we’re in Somerset digging for three weeks every Summer, but the truth is that excavations are complex projects. Organising a dig is not as simple as flinging some tools and students in a minibus and heading South West!

We’ve been reading up on what is known about the deserted medieval settlement and thought this’d make a good opportunity to share our knowledge.

In 1976 archaeological attention was drawn to a ‘bumpy’ field near Lufton (but actually in Odcombe Parish) that was reputed locally to be the site of an old quarry. Investigation of the site showed it to be the earthworks of a well-preserved Medieval settlement with remains of crofts, holloways, low platforms and boundaries surviving.

A plan of these earthworks was made by the late Mick Aston (county archaeologist at the time). 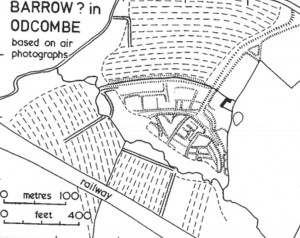 and some aerial photographs were taken that show the site. 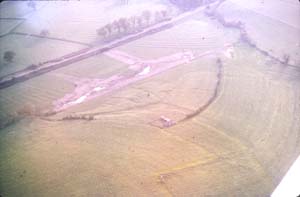 Earthworks of the site 1976 (from Somerset HER)

The site was bulldozed shortly after this work was undertaken and some tenth- to fourteenth-century pottery was recovered.

Some further archaeological work was carried out in the early 1990s when the Odcombe-Ilchester waterpipe was laid. This identified a single medieval ditch associated with the settlement and some ridge and furrow.

Documentary records indicate that the site was known as Barrow Orchard in the nineteenth century. In the Lay Subsidy of 1327 a ‘Richardo de Barrow’ is recorded in Odcombe and this might suggest that the settlement was called ‘Barrow’, although we don’t know this for certain.

For further information please take a look at the Somerset HER, or the following papers in Proceedings of the Somerset Archaeological and Natural History Society.

Pearson, T. 1978 ‘Late Saxon and early Medieval pottery from the deseerted village of Barrow(?) in Odcombe’, Proceedings of the Somerset Archaeological and Natural History Society 122, 79-82.

Post-excavation work on last year’s excavation is still on-going. Normally we like to have an assessment of our work complete before returning to the field for another season of work. However, this year we haven’t been able to do this because James has been very busy with teaching and research commitments and Andy is busy wrapping his PhD up. Not to fear though – the work is in progress.

If you were following last season’s blog you might remember that Dave and Cubby found a very nice greyware flagon of Roman date in a ditch. Dave worked on the pottery assemblage for one of his second year modules (ARA2101 Artefacts) and produced a very nice drawing, which will go into the assessment report when it’s complete. Just a month to go until the team heads down to Somerset.

Yesterday James and Andy spent some time thinking about the geophysics and aerial photos of the DMV site. This left them with lots of questions and pondering how many trenches we should dig and how big they should be…

Meanwhile most of the team have finished their exams and headed home for a few weeks’ rest before the dig starts.

The Archaeology Team at Newcastle University are pleased to announce that our new, online course about Hadrian’s Wall is now accepting registrations of interest.

The course is FREE, requires no previous experience or knowledge and begins in September.

Further details can be found by following this weblink.

Hadrian’s Wall is a long way from Lufton but it’s a reminder that Britannia was a frontier province.