Impact?  Increasingly, there is an expectation that academic research makes an impact; but what does this actually mean?

Even at a superficial level it is not easy to define because impact can refer to one object hitting another with force, and it can also refer to the effect that force has on the object.

As such, it denotes a violent action of immediate cause and effect.  So when scholarly research is said to make an impact it means that as researchers and teachers our work has made a strong effect on something or someone.

Such beliefs about impact have traditionally been dominated by the idea of scientific impact, such as the impact a new drug has on illness, or material sciences having an impact on the design of civil, commercial and military aircraft and so on.

In my area, organization and management theory, impact is rarely that straight forward, and seldom is it immediate: in fact it can take decades to evolve. My colleague, Professor Chris Carter has a favourite quote from the British economist J.M.Keynes, which fits well here:

“The ideas of economists and political philosophers, both when they are right and when they are wrong, are more powerful than is commonly understood. Indeed the world is ruled by little else. Practical men, who believe themselves to be quite exempt from any intellectual influence, are usually the slaves of some defunct economist.”

In other words, ideas matter. Social science research is about knowledge, or what I prefer to call the materialization and seeding of ideas.  Lots of ideas flourish, both good ideas and bad ideas, and in social science we have plenty of good and bad ideas which are sustained.

An issue for researchers, particularly in business schools, is that the impact we make is rarely quick, and because what we deal with is knowledge, it often is difficult to demonstrate in practice.

As governments move increasingly more towards ‘impact’ as a measure of quality, business schools will face increasing pressure to demonstrate that their research matters.

Impact however does not necessarily mean the research was any good, or well designed, it just means it was ‘taken-up’. The danger is that this leads to a clamour for easily implementable ‘quick fixes’ that do little to help the deep seated problems of organizations, and societies, or to advance scholarly knowledge.Instead, it leads to the emergence of sharp suited, ‘fast intellectuals’, whose stock in trade is to retail solutions for virtually every conceivable problem.

So now, organizations expect ‘fast’ value rather than ‘real’ value:  normalising fast value as the expectation, and normalising poor research practice and dissemination.My argument is that impact is a social process that forms and transforms with time.  As such for research to have impact it requires uptake and so the research must make sense to the community (or stakeholders), within which the research matters.

In this sense research should make a difference, should matter, and should make sense in a way that it provides insights and knowledge that are usable or translatable into practice.  However, there should be just as much onus on business and organizations to be curious, inquisitive and committed to well designed and conducted research as there is on academics who are expected to be ‘engaged’ with business.

In this way, there is a greater challenge to ensure integrity in the research – that the research is warts and all without fear or favour. Research that tells people what they want to hear is seldom well designed research, and more importantly it’s useless – even though it can make an impact: but impact is not necessarily a good thing.  We need to celebrate good collaborative research, learn from it, develop skills and capabilities in doing it, and most of all really make sense of the term impact that is user centred.

Tyrone Pitsis is Reader in Strategic Design and Co-Director of Strategy, Organisation and Society Group at Newcastle University Business School, and is Chair of Practice Theme Committee of the Academy of Management.

James Timpson, Chief Executive, Timpson, and largest employer of ex-offenders in the UK 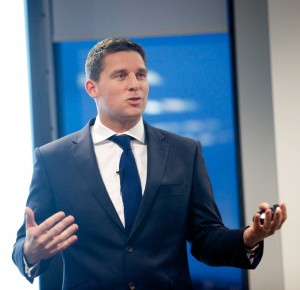 I’m really pleased that the political will is now firmly behind the rehabilitation of offenders, so that we as a country can try to help people in prison never to go back. Chris Grayling has started off on the right foot in my opinion. It’s obvious as I go around prisons recruiting people for our business that we need to be much better, more committed and fully open about the need to help people turn their lives around, and not assume they can always do it on their own.

I am working with the team at Newcastle University Business School to help train and inspire the North East prison bosses to become more entrepreneurial in their approach. Creating a culture in prisons that is about how you can fit into working life on release, and not about sitting on your bed all day, is one I know is right. I am determined to understand what can be done to reduce the justice system’s burden to the taxpayer.

In an open letter to the government (below), we called on government to act. Up to 80% of prisoners could work a full week towards their futures as citizens, yet only a fifth of them have been given this opportunity. Our academics held talks with community, policy and business leaders on this issue several weeks ago to gain a better understanding of the opportunities available to everyone involved.

To dispel fears about the possible negative outcomes of employing ex-offenders, education is just as influential to reforming the prison system as the results expected from private companies. Prison population is diverse and complex and full of untapped opportunity, but the question of how governors can unlock this potential will remain unknown unless they work well with companies.

It’s going to take a lot of experts from many areas to inform this ‘rehabilitation revolution’. Universities such as Newcastle and bodies like the Institute of Social Renewal are some of the best resources to advise prison governors towards a new way of thinking.

Prison governors need to become commercially driven to enable this cultural change. By starting a discussion on the type of ‘intelligent approach’, we can turn prisoner rehabilitation away from becoming a problem this country needs to solve and into something this country can use to its full advantage.

A commitment to allow prisoners to re-enter society, as opposed to just letting them rot, has real potential to improve the outcome of our justice system for everyone. So go for it Chris, go for it MoJ, go for it prison bosses, and as citizens we need to play our part in supporting this agenda.

SIR – Working prisons provide offenders with the skills and support they need to turn away from a life of crime. Not enough of our prisoner population is in work, yet governors estimate as many as 80 per cent are in a position to work a full week.

The Government is pursuing an agenda to reform the prison system (report, October 9) in order to reduce re-offending rates. At the same time, the Government wants to bring outsourced operations of business back to Britain. If we allow prisoners to work, they can support their families and contribute to victims’ funds, relieving a burden to the taxpayer.

But there are commercial and practical challenges: prisons must be able to attract local employers and negotiate profitable contracts. And we, as a society, must overcome our intolerance of those who have committed crimes and realise that work is essential to their rehabilitation.