Speaking to a conference of National Association of Pension Funds, Prince Charles voiced his concerns over whether Britain’s’ pension system is built to cope with its ageing population. He emphasised that it is pension funds’ duty to manage environmental, social and economic risks and to change the culture of ‘quarterly capitalism,’ which is unfit for purpose. Prince Charles left it up to pension funds to ‘help shape a system designed for the 21st century and not 19th century’.

Having spent over seven years researching pension fund governance and investment, I would say that yes, change is needed but it is unrealistic that this change will happen, due to issues around pension fund liabilities, complexity of pension fund investment, demographic changes and the current economic climate.
‘Quarterly capitalism’ whereby businesses pursue short term aims for short term gains at the end of each financial quarter, is the sign of our challenging economic times.

Firstly, there are issues around how trustees interpret their duty. The UK legal trust tradition, which gives pension fund trustees the power and the fiduciary duty to act in the best interests of pension fund members, means that trustees -on the most part- interpret that duty as acting in the best financial interests. My recent research into UK pension fund investment practices suggests that trustees’ interpretation of their fiduciary duty of care is a core guiding principal, which informs pension fund investment strategies and actually discourages share-owner and stewardship activities.

Furthermore, pension funds are currently operating in an environment characterised by economic recession and unstable, and complex, financial markets. Sadly, pension fund finances are now suffering a double financial blow: one from falls in stock markets and another dealt by the economic recession, impacting on cash flows and pension contributions of the sponsoring companies and local authority councils.

According to the latest figures, pension fund funding deteriorated significantly between March 2011 and March 2012 – the funding ratio (assets divided by liabilities) also fell from 100 per cent to 83 per cent (The Purple Book, 2012), putting more pressure on schemes to look for short-term investment returns to improve funding.

Pension funds are also operating in a world of increased human longevity and progressing pension fund maturity. Scientific data shows that life expectancy rose both in men and women: a 65-year-old man retiring today will, on average, live to 89. As a result of increased life expectancy, pension fund liabilities have soared to £1.702.6 billion with pensions deficits rising to £677.3 billion in 2012, from £470.7 billion a year earlier (The Purple Book, 2012).

Pension fund deficits have created a need for pension funds to match assets with liabilities, the so-called Liability Driven Investment (LDI) is putting more pressure on pension funds to rely on the market, volatile as it may be, to address the funding problem. Pension funds are forced to seek more short-term investment solutions, capable of ensuring the continuous flow of investment income into the fund and secure the payment of pensions.

If we are to start tackling this pension issue, we need to account firstly for the complexity associated with current financial markets. Secondly, we need to focus more attention to the responsibilities and accountability of financial intermediaries such as investment consultants advising the trustees and the investment fund managers who manage pension fund assets on their behalf.

With these two actions, we could make some steps towards the much needed change Prince Charles has called for.

Newcastle University aspires to be a world-class civic university delivering benefits to individuals, organisations and to society as a whole, so it was a delight for the Business School to host Professor John Goddard OBE, Emeritus Professor of Regional Development Studies and former Deputy Vice Chancellor of Newcastle University to speak about his recently published book The University and the City  co-authored with Paul Vallance.

John is a leading proponent of the civic university concept, arguing in a 2009 NESTA Provocation that all publicly funded universities in the UK have a civic duty to engage with wider society on the local, national and global scales, and to do so in a manner which links the social to the economic spheres.

John revealed three tensioned themes emerging from his research – passive local physical, social and economic impacts of universities (campus footprint, student purchasing power, employment generation) vis a vis their active engagement in the development of the city; economic vis a vis more holistic views of engagement with civil society and the ‘external’ civic role of the university vis a vis ‘internal’ processes within the university and state higher education policies that shape these external relations.

John’s distinguishing attributes of a ‘civic university’ are:

Plenty of food for thought, especially for a Business School. What does a ‘civic’ business school look like and how well does Newcastle University Business School fit that description?

Those are questions for a later post, but as I was pondering them I came across an article in the Financial Times (15 April 2013) by Della Bradshaw on German Business Schools. She notes that while Germany is the fourth-largest economy in the world, the country has no world-renowned business schools or top-ranked MBA programmes. In the article Robert Wardrop, research fellow in sociology and finance at the Judge Business School, University of Cambridge, ascribes this to the stakeholder value model of German business, which is incompatible with the methodologies that drive most Business School rankings. The MBA rankings tend to have an emphasis on salary maximisation, the traditional US individualist justification for undertaking an MBA. So, another question, does the third of John Goddard’s tensioned themes – the external role of a civic institution vis a vis internal processes and state policies have an added dimension for Business Schools?

Do Business School rankings take sufficient regard of an institution’s ‘civic’ role? In a time of unprecedented societal challenges globally I would like to suggest they should.

The failure of strategy has led to an era of fiscal, institutional, and legitimacy crisis with major moral tensions.

Five years after the financial crisis hit, almost destroying the UK banking system, we continue to try to understand the factors that contributed to the disaster. This was a disaster that, as the world knows, overwhelmed the Royal Bank of Scotland and HBOS to the extent that UK taxpayers are still majority owners of these banks (HBOS having been taken over by Lloyds).

The UK public may well be puzzled as to how the disaster happened and who, apart from the publically scapegoated and dishonoured ‘Sir’ Fred Goodwin, is responsible for its occurrence.

This month (April 2013) has seen the Parliamentary Commission on Banking Standards produce a report in a bid to continue to try and unravel what happened when private loss was made a public debt, and we slipped into a recession.

The Commission has been set up to consider and report on:
• professional standards and culture of the UK banking sector, taking account of regulatory and competition investigations into the LIBOR rate-setting process
• lessons to be learned about corporate governance, transparency and conflicts of interest, and their implications for regulation and Government policy
The report on HBOS is refreshingly willing to name names, and allocate blame to the leaders of HBOS at the time of the crash, naming in particular Sir James Crosby, Andy Hornby, and Lord Stephenson.

The (formerly) highly paid senior bankers quoted in the report continue to claim that the crisis was a sort of unforeseeable natural disaster (‘tsunami’ is a term used on a number of occasions). This report and the written and oral testimony collected by The Commission provides invaluable evidence of individual, group, and institutional dysfunction.

In particular, the main issues that emerge from the report are (1) that HBOS was doomed irrespective of the financial crisis; (2) the bank’s ‘retail culture’ played a role in perverting the aims of the bank as a customer service organisation, (3) that the HBOS board lacked banking, rather than retail, experience, and was (4)  unwilling or unable to address issues of existential risk that were undermining the bank, even when brought to the board’s attention by a whistleblower.

The report raises questions for practising managers and for business school academics concerning how managers can manage large and complex organisations.

Hopefully this report will contribute to another lesson: how we teach future business leaders to sufficiently analyse corporate issues with responsibility and ethical practice.

Penny for your thoughts 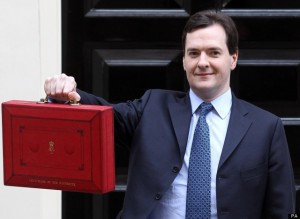 As with any budget, the devil is in the detail.

And after watching today’s Budget for an ‘aspirational nation’, I feel that while the political analysis takes up the margins of our newspapers, as a region and nation we must stick together to make this work for us.

I am a business historian and have analysed many fiscal policies and Budget announcements over the last sixty years; I’ve seen the good, the bad and the ugly.

What is clear from Osborne’s budget today is the need to ‘fix’ our state through monetary activism, supply-side reform and fiscal policy.

From curing the ethics within our banks to attracting new businesses to our shores, as a nation we need to be ensuring that confidence in investment is the foundation on which we build our reformed state.  And how do we get this confidence? Through innovation stimuli, is how. Innovation acts as a bedrock for demand, job creation and, ultimately, assurance in the system that generates real wealth.

Many commentators will be discussing the implications of Osborne’s policies, but I want to talk about what we can control.  And that is our networks and knowledge economy.

As part of a civic university, the Business School needs to work with business and regional policy makers to build an industrial and business strategy that can work for us.  From cutting edge research, leadership and management training to harnessing innovation, the Business School’s doors are open to support the needs of the region to help us grow again.

In this spirit, open collaboration between higher education and businesses can lead to some of the most disruptive and ingenious work: bringing with it vital market share and wealth creation.

The importance of academia, industry and commerce working together as a triple helix for success can also be seen in Heseltine’s review ‘No stone unturned in pursuit of growth’.  And with Osborne’s nod to Heseltine’s suggestion of creating a single funding pot for skills, housing and transport, I am looking forward to further details being released.  Regions need to know how much and when to expect this to be implemented.

Moreover, with emerging business models like employee ownership and cooperatives operating in a rapidly changing business world, universities and businesses need to work together to decide how we can best do things differently.

As Osborne said today ‘Britain is open for business’, but what I would like to stress is that, yes the economic and fiscal policies outlined today will have some impact in the coming months and years, but we are the people who can add value through being ‘truly’ open for business through collaborative networks leading to innovation.