Stored in the Bloodaxe archive in the Robinson Library there is a note written in the margins of the manuscript of Ken Smith’s poetry collection, ‘The Poet Reclining’ from 1977, one of Bloodaxe Book’s first publications:

References to ‘Janet’ continue to appear frequently in the editorial marginalia, minutes and notes. As part of her practice-based PhD research, Kate Sweeney has decided to build a ‘Janet’ – from traces of administration ephemera found in the archive. An amalgamated, chimerical idea of a ‘Janet’ from paper. From the margins, notes and minutes, but mainly from the post-its – a part of the archive and Apart from the archive – much like Janet herself…

‘Treasure of the Month’ 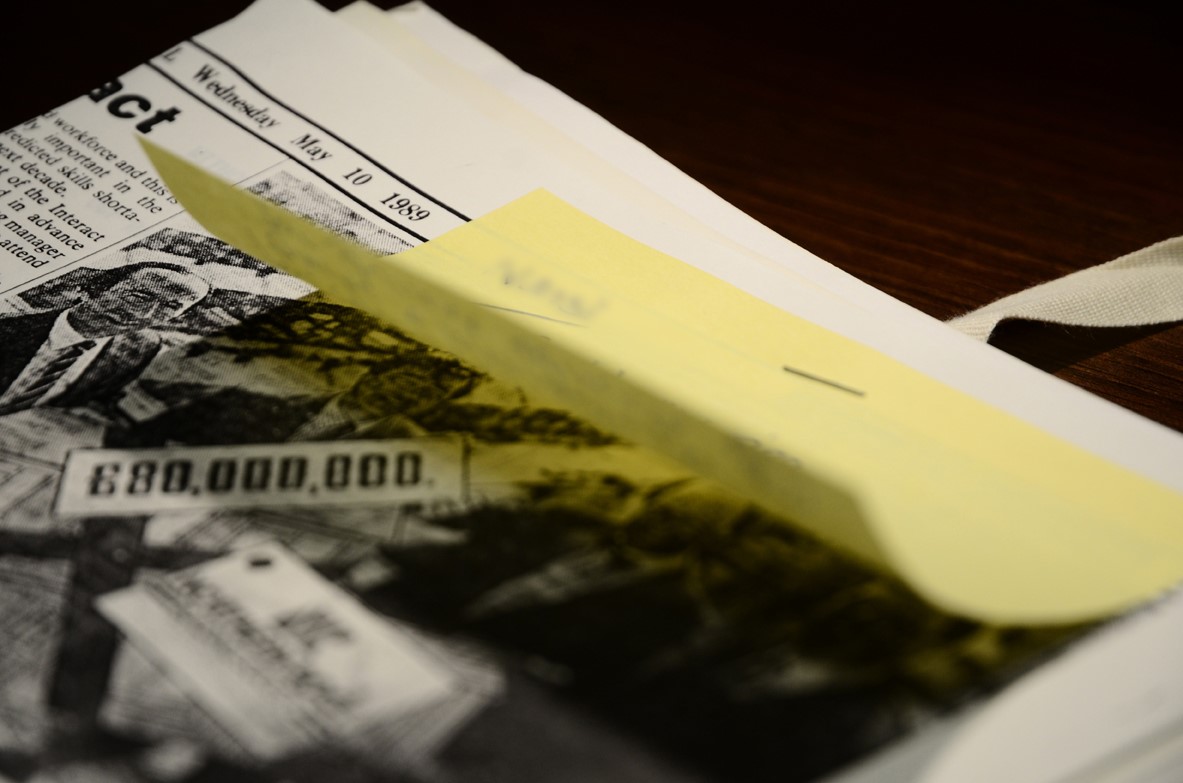 This month’s treasure is Janet. Janet seeps through on post-its pressed upon other people. A part and apart, her stickiness is temporary, her yellow glow fleets over faces. She is deeply disposable unless undetected – then, she slips off her sheet, off her box and into the archive…

Image: Post-it note attached to material in The Bloodaxe Archive, contained in BXB/4/5/1 and stored in Special Collections at The Robinson Library. 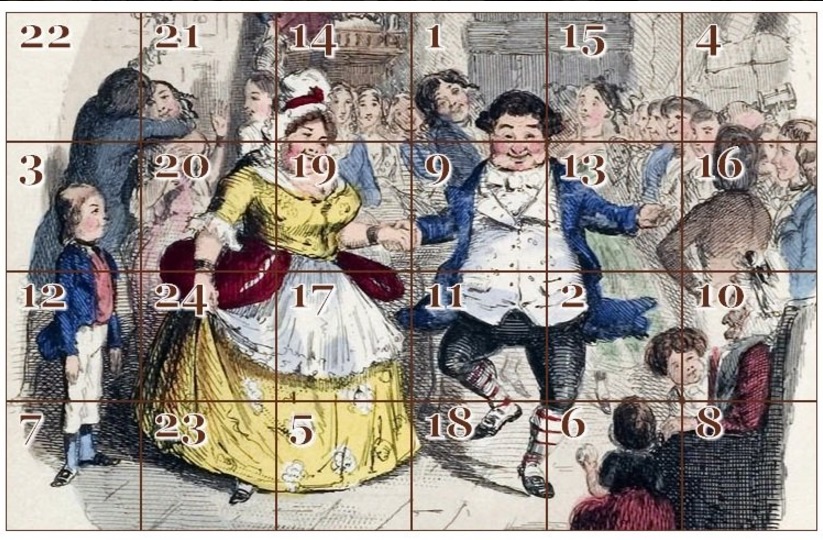 Lewis Carroll is a pseudonym of Charles Lutwidge Dodgson. Born in the village of Daresbury, Chesire, he was the eldest boy in a family of eleven children. Carroll was educated at home, until the age of twelve when he was sent to Richmond Grammar School in North Yorkshire. In 1851 he registered at Christ Church, Oxford, where he excelled at maths. He received the Christ Church Mathematical Lectureship in 1855, which he continued to hold for the next twenty six years. However, he is best known as an adept storyteller; spinning new tales to entertain his friends.

Alice’s Adventures in Wonderland was inspired by real events and a real child. The story occurred in 1862 during a river outing with Henry Liddell, the Dean of Christ Church, Oxford, and his family. Along the journey Carroll spoke of a bored little girl called Alice who goes looking for adventure. Alice Liddell (one of three daughters on the trip) loved the story so much that she asked for it to be written down. Carroll agreed and he eventually completed the story two and a half years later.

The enchanting tale has charmed both children and adults through numerous re-prints, theatre productions, film adaptations and more. Special Collections hold a version of Alice’s Adventures in Wonderland that was published in 1922 by Hodder and Stoughton and contains twelve reproduced illustrations of highly detailed tipped-in colour plates by Gwynedd M. Hudson. Each illustration contains specific scenes from the story, including Alice receiving advice from the Caterpillar, Alice and the Queen of Hearts playing croquet, and Alice meeting the Gryphon and the Mock Turtle. Hudson passed away at the age of twenty six but, despite her short life, she is noted for her remarkable illustrations in J.M. Barrie’s Peter Pan and Wendy as well as Alice’s Adventures in Wonderland.

‘ONCE again your friend a hearing

Claims from you, my little miss;

With a volume neat appearing,

Full of pictures, see, ‘tis this.

Long ago he gave a promise

Travelling far and wide, tho’ from his

Yet o’er many a volume poring,

Such as you could hardly read;

Your enquiring minds to feed.

He has travelled thro’ and thro’ them,

Often wearied with his toil,

Gath’ring knowledge all the while….’

These verses open Isaac Taylor’s Scenes in America, for the Amusement and Instruction of Little Tarry-at-Home Travellers (1821). Scenes in America was part of the wider Scenes series, ‘a series of armchair traveller books for children’.Other titles included Scenes in Europe (1818) and Scenes in Africa (1820), as well as several other titles.

The books in the Scenes series follow a standard pattern: ‘three small, coloured engravings appear on each page of illustrations, and they are linked by captions to the scenes which they represent. As for the text, it is rather light in tone, mixing prose and verse with the instruction which was its putative purpose’.

Isaac Taylor was a man of many talents. He was a talented engraver and artist, a popular Church pastor, an ardent educationalist, and a successful children’s writer. Taylor’s educationalist outlook was both a major part of his life and his literary work. As deacon of an Independent congregation in Lavenham, Suffolk, Taylor had founded a Sunday School, where his ‘successive workrooms doubled as schoolrooms for his own children and later for those of neighbours too, Taylor giving instruction from his engraving stool as he worked’. When the family moved to Colchester, ‘he began a series of monthly lectures for young people, delivered free of charge in the parlour of his own house; these proved extremely popular and the programme continued for several years’.

Taylor’s belief in education and the stimulation of young minds can be seen as a driving force in his production of the Scenes series. However, Taylor’s moral and educational instruction could also take on a more overt form. Taylor was an ardent opponent of slavery and the slave trade. Scenes in Africa had spoken out against slavery, and Scenes in America reinforced those sentiments. Taylor was keen to explain to his young readers that, although they may have won a victory by abolishing the slave trade in the British Empire, they had not yet won the war against slavery:

‘Although the slave trade is happily put an end to, so that no more can be brought over; yet there are many thousand negroes who are still slaves. It has made no difference to them, except that their masters are not so oppressive to them, as they cannot easily replace them if they die’. P.61

The moral decay slavery caused in those who took part in it was evident the ‘masters’ who only cared for their profit. This moral dimension was of course part of Taylor’s moral education of his readers. But he also mentioned the physical brutality and callousness of slavers: ‘To every party there is an overseer, who stalks among them with a long whip, ready to lash any who do not work fast enough to please him’. The images this passage conjured would no doubt have made an impact on his young audience.

As J.R Oldfield has suggested, ‘most children’s books published between 1750 and 1850 were unashamedly moralistic and concerned, above all, with inculcating a compassionate humanitarianism’. Taylor’s abolitionist message in his books certainly fits this wider trend, but it also within the more specific trend of attempting to create an anti-slavery consensus ‘through the education of young and impressionable minds’.

Yet Scenes in America was far more than a moral instruction book. It was meant to evoke a sense of wonder in the reader, of this faraway world and the flora and fauna it contained. There were strange animals found there, like the ‘dreadful serpent’ the rattlesnake, the ‘passionate’ hummingbird, and, ‘glowing with celestial light’, the firefly. He showed the reader societies of people with different customs and ways of life. Taylor devotes sections to several difficult indigenous groups, and the engravings provide tantalising glimpses of these exotic lands to stimulate the minds of child readers (the accuracy of these descriptions and engravings, is of course, another matter). No doubt some of these are sensationalised or included for dramatic effect, such as the section ‘Sacrificing a Child on its Mother’s Grave’. Yet there are also sections on ‘Hunting the Buffalo on the Ice’, ‘Indian Sagacity’, and ‘the Pipe of Peace’. For those interested in studying European perceptions of indigenous Americans, Taylor’s work provides an example of an attempt to show the cultural diversity of Native American societies, while at the same time never quite seeing them as worthy or as equal as his own.

Scenes in America was also an abridged history of European involvement in the New World. The narratives of the Spanish conquistadors of course provided an exciting tale for his readers, from Columbus’ contact to the conquests of Hernan Cortes and Francisco Pizarro. Indeed, the history of what we would call Latin America takes up approximately half of the book, so Scenes is in no way a glorified account of English and British settlement. But North American history was also discussed, with sections ranging in content from religious emigration to the New World, to the American War of Independence, with sections on Canada and, as we have seen, the West Indies.

It wasn’t just the grander narratives of history that Taylor included. He discussed the daily lives of the ordinary settlers and tried to portray a sense of their daily lives, with sections such as ‘New Settlers First Log House’, and ‘Cultivating Tobacco’.

The fruits of Taylor’s educational mission can be seen in the literary and artistic abilities of his own children. Indeed, the family have been labelled as ‘amongst the most famous and prolific children’s authors and illustrators of the early nineteenth century’.

Ann and Jane Taylor were successful children’s poets, with Jane in particular achieving prominence. Her works include the still famous classic (and often anonymised) Twinkle Twinkle Little Star). Jane was also well regarded as an essayist and literary critic. We hold several of Jane’s works here in Special Collections, including Original Poems for Infant Minds and The Memoirs, Correspondence, and Poetical Remains of Jane Taylor, edited by her brother Isaac.

Isaac himself was known as a writer on theology, philosophy, and history. He was also a talented artist and engraver (indeed, he collaborated with his father to produce the illustrations for Scenes in America). We hold a number of his works here in Special Collections. These include The Natural History of Enthusiasm, the work that made his name, and Home Education, a work clearly influenced by his own experiences.

Jefferys Taylor, the youngest child, also gained prominence as a children’s writer, producing numerous works of varied character over a number of years. Like his father’s writings, Jefferys’ works ‘were overtly educational in purpose’, but their message was delivered through fictional or adventurous settings. Like his siblings, he also engraved some of the illustrations for his own books.

One of the verses in the conclusion contains a pearl of Taylor’s wisdom that is perhaps even more relevant today than then, and that we would all do well to remember:

To know it impatient I burn;

And ignorance here too is frightful,

So easy it is now to learn.’