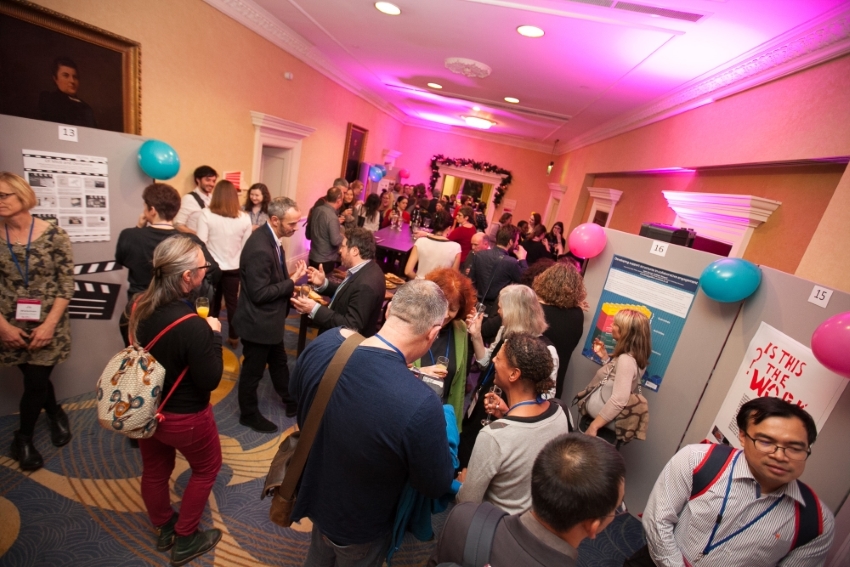 On 6th and 7th December 2017, I attended and presented at the National Co-ordinating Centre for Public Engagement’s Engage Conference in Bristol, which this year focused on ‘exploring collaboration’. In this blog post, I’ll be reflecting on what I’m taking away from the conference and sharing the poster I presented on the Vital North Partnership between Newcastle University and Seven Stories: The National Centre for Children’s Books.

Thinking about collaborating with a university, what animal is a university like? Is it an octopus? A soaring eagle? A bee? Or a huge, slow-moving whale? That was the opening question posed to delegates at the NCCPE Engage Conference 2017, and set the tone for two days of creative debate about the nature of university collaborations.

In the first plenary, Ahmed Bawa of Universities South Africa focused on the ‘intensely local, and intensely global’ challenges which we face in society today. In a context of growing inequality, he encouraged universities to think hard about what they can do to further the social justice agenda. Newcastle’s Institute for Social Renewal, and Seven Stories’ work with children and young in some of the poorest areas of the North East, means this is a focus for the Vital North Partnership’s work.

Nancy Cantor’s plenary, on Rutgers University’s work as an anchor institution within Newark, New Jersey, considered social justice in the context of the “birth lottery”. Universities do brilliant work on widening participation, but generally focus on Year 6 and above. In my work with Seven Stories, I see first-hand the impact that engaging with the arts has from birth onwards; and I often wonder whether universities need to engage with children and young people at an earlier stage.

I heard more about the Museum and University Partnerships Initiative in the conference workshops, which I’ve recently been involved with alongside colleagues from Seven Stories, Tyne and Wear Archives and Museums and Northumbria University. It was really interesting to hear about some of the other MUPI projects from around the country and hear about successful engagement initiatives like TORCH’s Fright Friday event at the Ashmolean Museum in Oxford, and the National Museum of Scotland and the University of Edinburgh’s Science Saturday initiative (definitely a pattern emerging there). I also explored how the University of Bristol was engaging with the Fun Palaces campaign, which brings art and science to the heart of the community.

In the mini-plenary on Strategic Approaches to Collaboration, I heard about current approaches to co-ordinating partnerships. Cardiff University presented their amazing work in the Grangetown area of the city, Community Gateway, which went on to win the Professor Sir David Watson Award for Community University Partnerships at the close of the conference. The Campus Engage project, a collaboration between the Irish universities, also presented on their charter for civic and community engagement. Campus Engage aimed to survey community / university partnerships to provide guidance on best practice and recommendations for the Irish Higher Education sector, and their Engaged Research report makes for interesting reading.

In a complementary mini-plenary, I heard Sophie Duncan and Paul Manners from the National Co-ordinating Centre for Public Engagement talk about their attempt to create a typology of public engagement activity, and the motivations behind it. This seemed quite a successful and helpful framework when considering a single project, but I struggled to see how the Vital North Partnership’s work as a whole would map onto this.

Steven Hill, Head of Research Policy at Higher Education Funding Council for England talked about the Research Excellence Framework. I was particularly interested in his idea of collaboration as a skill set in itself, and the concept of distances of collaboration (both physical and figurative). Some of these comments about how research metrics are changing were echoed in the closing plenary, where Trevor McMillan, Vice Chancellor at Keele University, talked about the progress being made on the Knowledge Exchange Framework and the increasing governmental focus on the Industrial Strategy.

And of course, I also presented at the conference. I participated in the Co-production in Practice workshop, where I discussed building momentum within existing partnerships and came up with some top tips with the other delegates attending. I also took part in the poster party – here’s my poster, which captures just some of the highlights of the Vital North Partnership’s work in 2017:

So what is collaborating with a university like? Well, I would say a hybrid between an octopus and a whale. Newcastle University is a huge organisation, but through the Vital North Partnership, Seven Stories is collaborating with lots of different Schools and departments. A whoctopus, if you will. What do you think?