I’d like to share an experiment in developing a language-agnostic build system that does not require the user to specify dependencies between individual build tasks. By “language-agnostic” I mean the user does not need to learn a new language or a special file format for describing build tasks — existing scripts or executable files can be used as build tasks directly without modification.

I call this build system Stroll because its build algorithm reminds me of strolling through a park where you’ve never been before, trying to figure out an optimal path to your target destination, and likely going in circles occasionally until you’ve built up a complete mental map of the park.

Most build systems require the user to specify both build tasks as well as dependencies between the tasks: knowing the dependencies allows the build system to determine which tasks need to be executed when you modify some of the source files. From personal experience, describing dependencies accurately is difficult and is often a source of frustration.

Stroll is different. You use your favourite language(s) to describe build tasks, put them in a directory, and ask Stroll to execute them. Stroll does not look inside the tasks; it treats the tasks as black boxes and finds the dependencies between them by tracking their file accesses. This process is not optimal in the sense that a task may fail because its dependency is not ready and, therefore, will need to be built again later, but in the end, Stroll will learn the complete and accurate dependency graph and will store it to speed up future builds.

There is a build system called Fabricate that also tracks file accesses to automatically compute accurate task dependencies, but it requires the user to describe build tasks in a lightweight Python DSL and preschedule them by calling the tasks in the right order, essentially asking the user to do the strolling part themselves. Fabricate is cool and inspired Stroll but I’d like to explore this corner of the build systems space a bit further.

Stroll is just an experiment and I’m not sure if the main idea behind it is feasible, but it can already be used to automate some simple collections of build tasks. Let me give you a demo. I’m using Windows below but the demo works on Linux too.

We can build an executable bin/main.exe from it by using the following simple build script build/main.bat:

When executing build tasks, Stroll tracks their file accesses and stores the discovered information next to the build scripts, by appending the extension .stroll to their names:

As you can see, Stroll recorded the exit code of the script, two file reads and one file write, along with the corresponding hashes of file contents.

We can ask Stroll to visualise the discovered dependency graph:

The flag -g tells Stroll to print out the discovered dependency graph in the DOT format that we subsequently convert to the following PNG file: 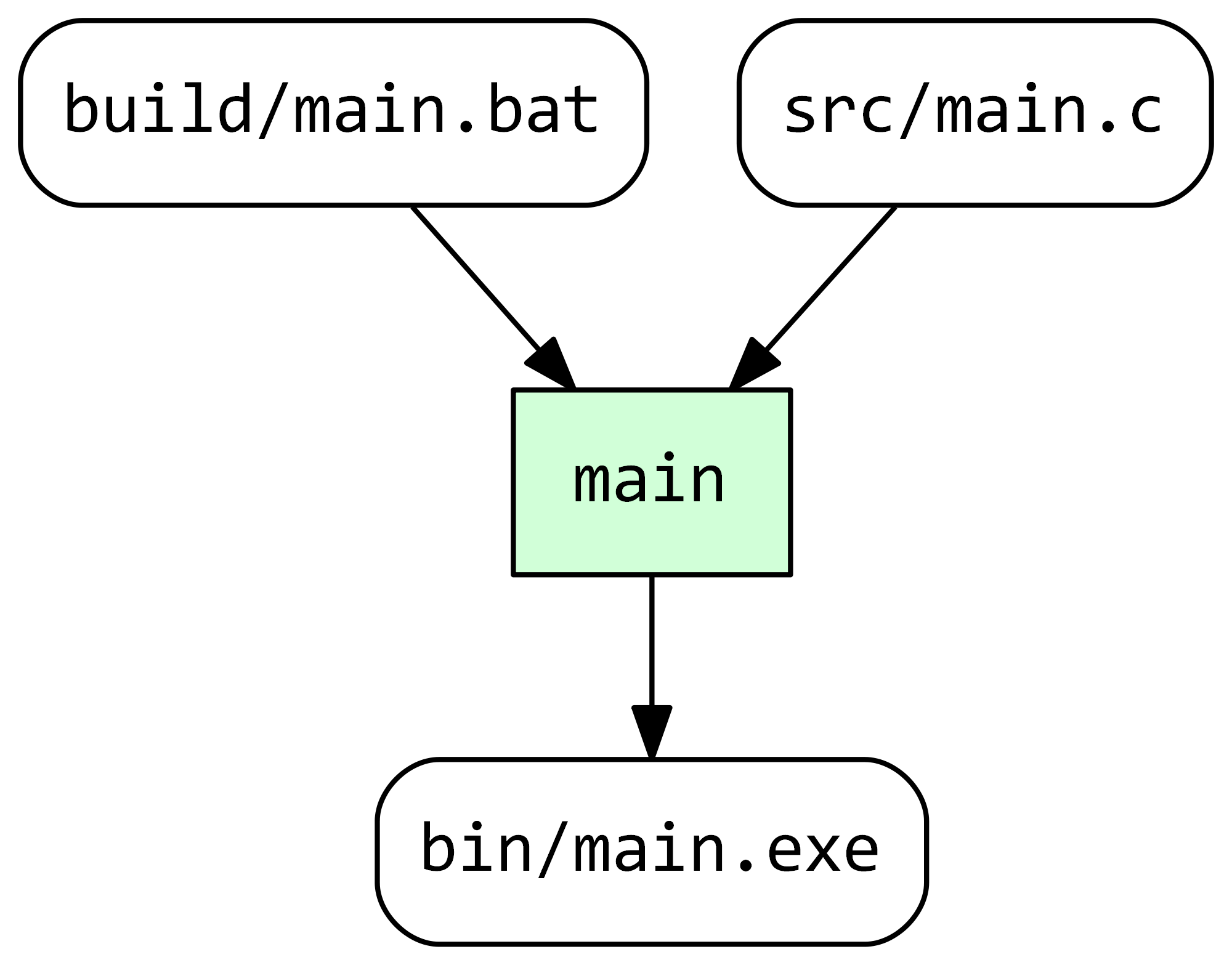 The green box indicates that the only build task main is up-to-date. This means Stroll will not execute it in the next run unless any of its inputs or outputs change. If we modify src/main.c and regenerate the dependency graph, we can see that the task main is now out-of-date: 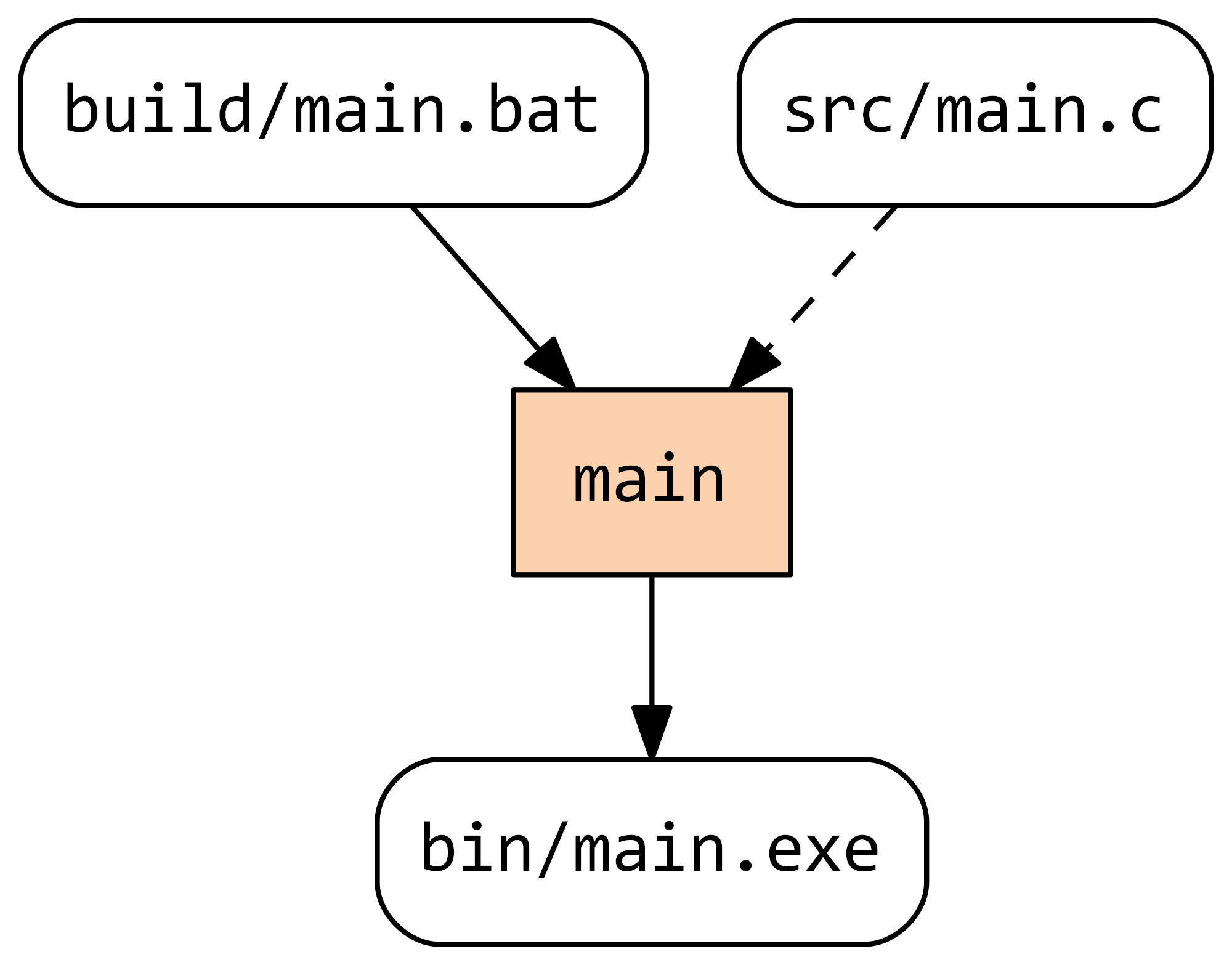 The specific dependency that is out-of-date is shown by a dashed edge. Note that Stroll is a self-tracking build system, i.e. it tracks changes not only in sources and build artefacts but in build tasks too.

To make the example a bit more interesting, let’s add a library providing a greeting function greet in files src/lib/lib.h and src/lib/lib.c:

To compile the library we will add a new build task build/lib.bat:

If we look at the dependency graph before running Stroll we’ll see: 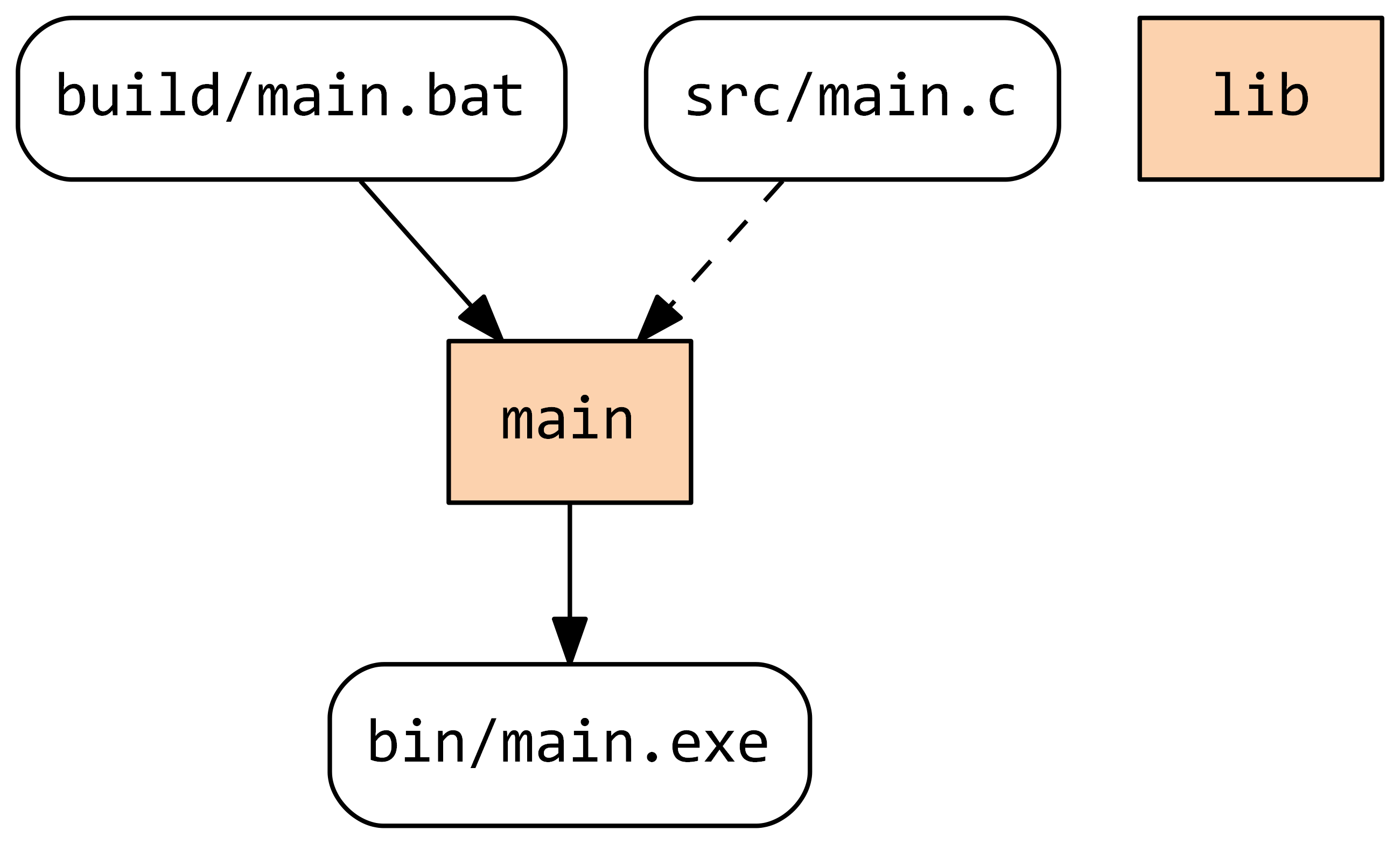 The new task lib appeared in the graph but without any dependencies; it is marked as out-of-date because Stroll has never executed it. If we run Stroll now, it will execute both tasks reaching the following state:

The tasks are currently independent and can be built in parallel but let’s make use of the library by modifying the main source file as follows:

If we run Stroll now, the build will fail:

By examining the file build/main.bat.stderr helpfully created by Stroll, we can see that the build failed because we forgot to modify the build script and point gcc to our library. An error is visualised by a task with a double border:

With this fix, Stroll completes successfully and produces the following dependency graph: 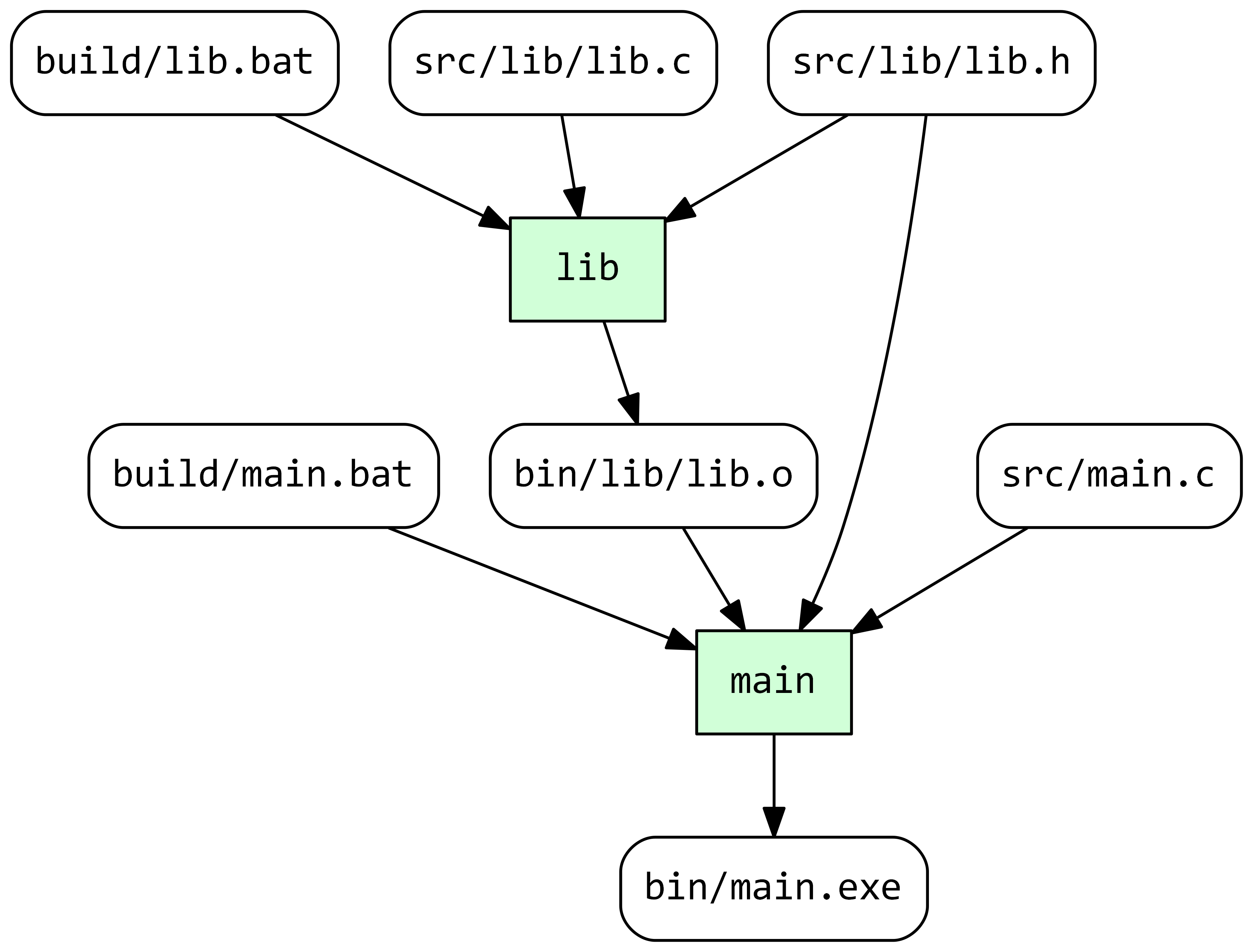 We can now demonstrate the early cut-off feature by adding a comment to the file src/lib/lib.c. Before running Stroll let’s check that this change makes both lib and main out-of-date: 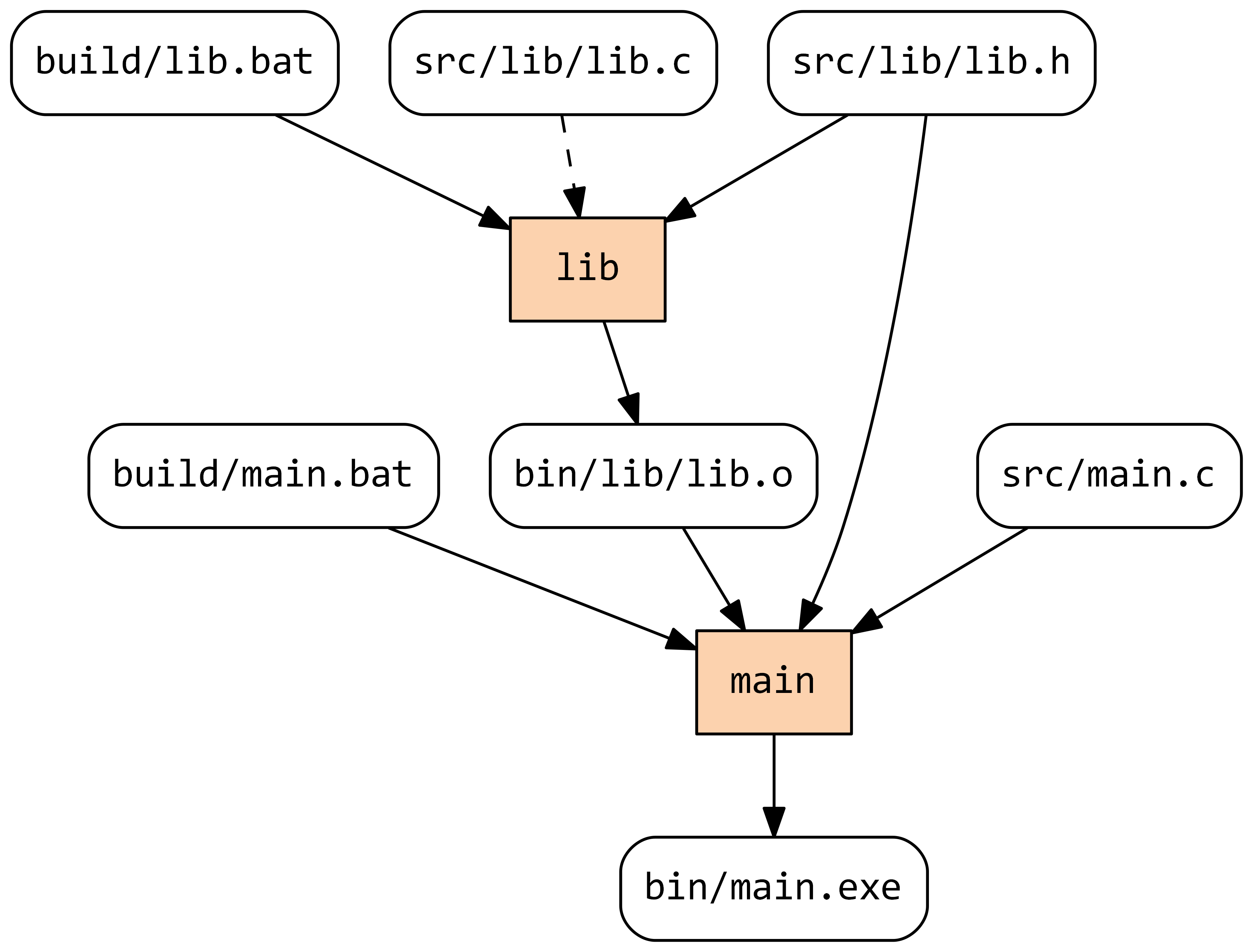 As you can see, both tasks are now marked as out-of-date: lib’s direct input has changed, which transitively also affects main. Let’s Stroll:

Stroll has rebuilt the library but the file bin/lib/lib.o didn’t change, thus restoring the up-to-date status of the task main.

Finally, to clean up after our experiments, let’s create a new task clean and place it into a different directory: clean/clean.bat. 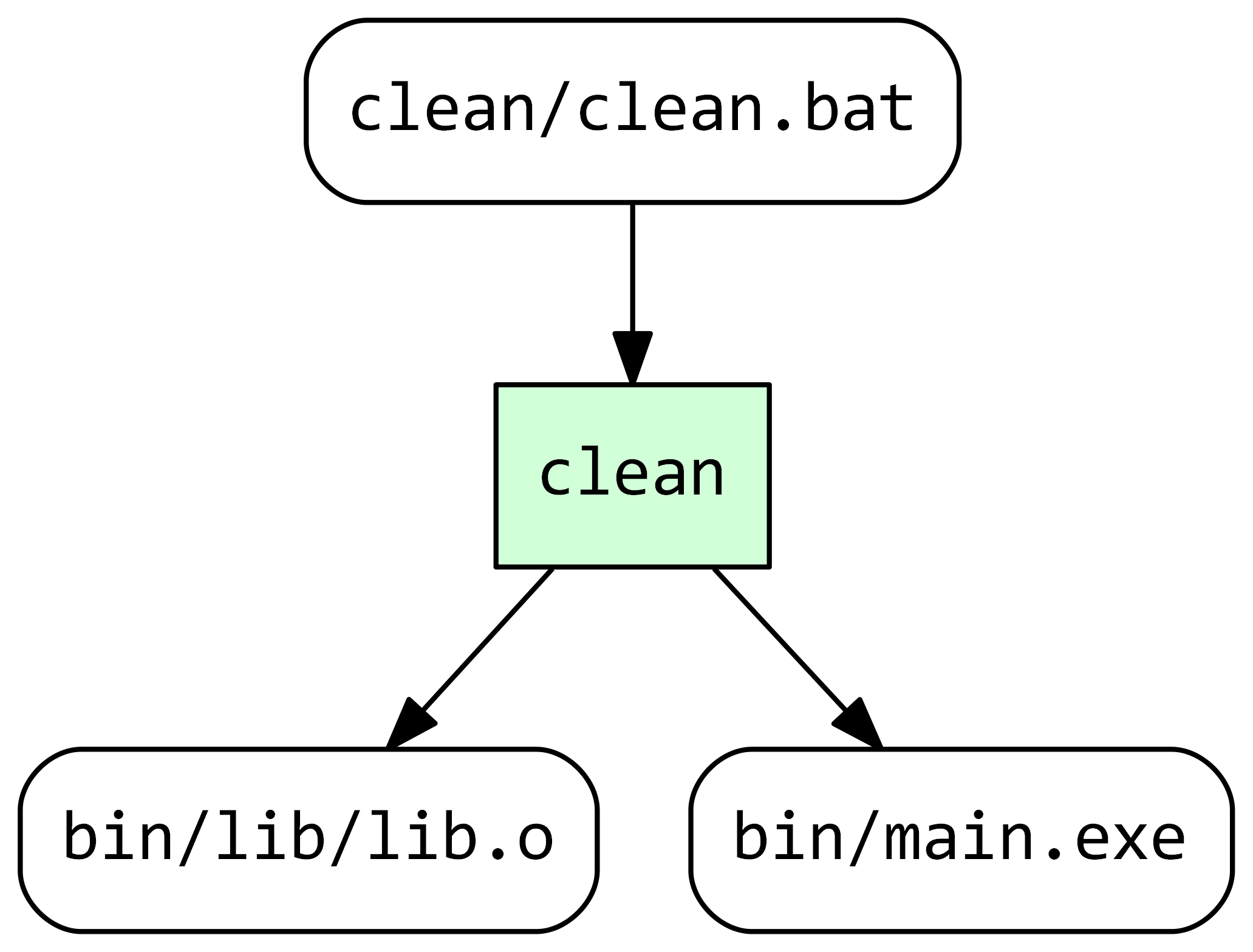 As you might have noticed, Stroll uses directories as collections of build tasks related to a common build target. To build a target we simply run Stroll in the corresponding directory. If you’d like to build just a single task from a directory, you can specify the full path, for example:

This executes the lib task (regardless of its current status). Note that the main task is currently out-of-date because clean deleted its output: 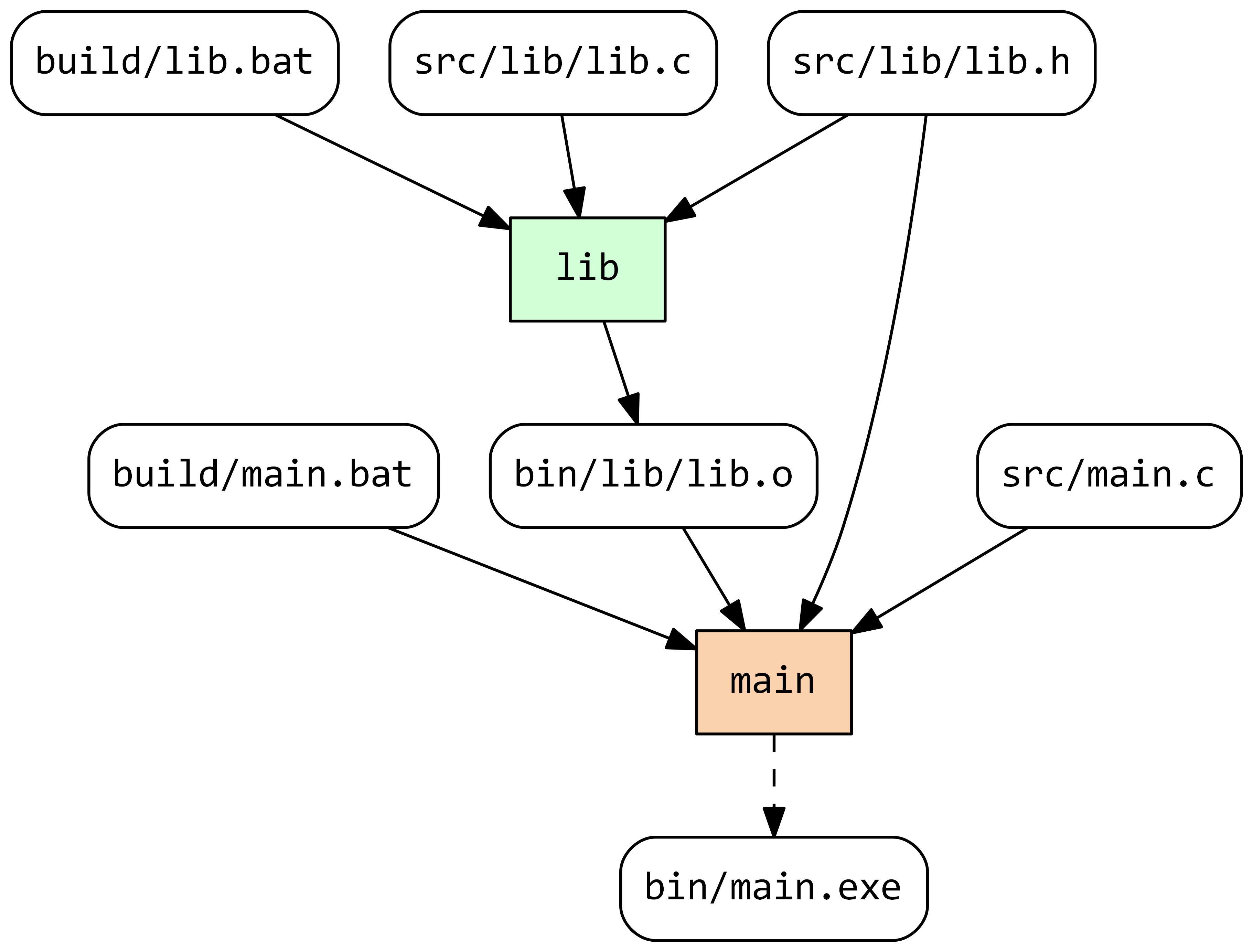 To complete the build, run stroll build, which will execute only the main task, as desired.

Challenge: Try to orchestrate a situation, where Stroll would execute one of the tasks twice, hence demonstrating that Stroll is not a minimal build system.

Stroll is implemented in ~400 lines of Haskell (including comments) and uses the following libraries in addition to the standard ones:

Many thanks to everyone who contributed to these projects!

You are welcome to browse the source code of Stroll and/or play with it, but be warned: it has a few serious limitations (discussed below), and I’m not sure they will ever be fixed.

Stroll is fun and I consider it a successful experiment but the current implementation has a few serious limitations:

One interesting aspect that I haven’t demonstrated above is how one can mix and match different languages when writing individual build tasks. For example, we could use Shake for compiling C source files into object files. Note that Shake itself is a build system that maintains its own state, but it still works out just fine: if Shake decides to rebuild only one object file (since others are up-to-date) Stroll can safely remember this decision — as long as all input files are the same and the Shake’s database is unchanged, we can assume that the results produced by Shake previously are still valid. This means that even though Stroll’s task granularity may be quite coarse (e.g. one task for 100 object files), these coarse-grain tasks can benefit from fine-grain incrementality and parallelism supported by other build systems, such as Shake. And if you happen to have two existing build systems written in different languages you don’t need to rewrite anything: you can compose your legacy build systems simply by placing them into the same directory and using Stroll.

Unusually, Stroll can cope with cyclic task descriptions, where a few build tasks form a dependency cycle, as well as with build tasks that generate new build tasks! Stroll simply keeps building until reaching a fixed point where all tasks are up-to-date.

Stroll does not fit the modelling approach from the Build Systems à la Carte paper, where build tasks have statically known outputs: Stroll supports both dynamic inputs and dynamic outputs. I conjecture that such build systems cannot be minimal, i.e. they fundamentally require a trial and error approach used by Stroll, where unnecessary work may be performed while discovering the complete dependency graph.

I’ve been thinking about this idea for a while and had many illuminating discussions with Ulf Adams, Arseniy Alekseyev, Jeremie Dimino, Georgy Lukyanov, Neil Mitchell, Iman Narasamdya, Simon Peyton Jones,  Newton Sanches, Danil Sokolov, and probably others. A few people in this list have been sceptical about the idea, so I do not imply that they endorsed Stroll — I’m merely thankful to everyone for their insights.