As you saw from our post a couple of weeks ago, ICaMB has recruited several new PIs. To make sure we all know more about them and their research, we decided to have a series specially dedicated to them: Early Career Researchers (ERCs) at ICaMB. First in the series is Dr Kevin Waldron.

As some of you will already know, I was awarded a Sir Henry Dale fellowship in 2012. This is a new funding scheme for early career researchers, which is co-funded by the Wellcome Trust and the Royal Society. The scheme provides exceptional research support for fellows, including funding a postdoctoral research assistant for the duration of the project (5 years initially, with potential extension for a further 3) as well as all direct research costs, with the aim of supporting the researcher while they forge an independent research career and carve out their research niche. As a result they are highly coveted and extremely competitive – the interview at the Wellcome Trust in July 2012 was probably the most intimidating experience of my career. My award was one of the very first round, in which 10 awards were given from a pool of about 100 applications. 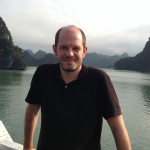 Enjoying the sights of Ha Long Bay (Vietnam)… and doing some deep thinking about my science, of course…

Though the grant was awarded in Summer 2012, I only activated the grant in May 2013 (primarily so that I could swan off on an extended holiday travelling round South East Asia – but that’s another story). Since May there have been two new additions to my lab team; Emma Tarrant, a postdoctoral research associate funded by the fellowship grant, and Anna Barwinska-Sendra, a new PhD student. This combination of good funding and great new people will allow us to really get our teeth into our research question over the coming years, free of the hassle of grant writing and worrying about where the next funds are coming from.

I have been studying bacterial metal homeostasis since I started my PhD with Prof. Nigel Robinson (now in Durham), way back in 2003. During that period I studied cyanobacteria, but my current research is focused on the Gram positive mammalian pathogen Staphylococcus aureus. S. aureus has become a major medical problem in recent decades due to the rise of strains that are resistant to multiple conventional antibiotics, with the term “superbug” and the acronym “MRSA” entering the popular consciousness – see for example here, here and here. The organism is particularly problematic in hospitals, where it causes significant morbidity and mortality (see for example these UK and US studies). Though infection control measures introduced in hospitals are proving successful in reducing the number of S. aureus-related deaths, both the prevention and treatment of hospital-acquired infections remain major burdens on patients and on the NHS budget. S. aureus is also problematic in farm animals, being a major cause of bovine mastitis and of lameness among broiler chickens.

One intriguing new approach to prevention of infection in such settings is the use of solid copper or copper-containing alloys. Copper surfaces show wide-spectrum antimicrobial activity and are certified by the US EPA as antibacterial and ‘self-sanitising’. Multiple trials have shown that these materials can reduce bacterial copper load on touch surfaces in hospitals (see here for example), and the effects on disease transmission are currently being tested. In fact, this is not a new approach at all: as this YouTube clip explains, copper has been used since ancient times to sterilise drinking water and to treat minor ailments, even being mentioned by Hippocrates in ~400 BC. Copper is the active ingredient in numerous agricultural fungicides including Bordeaux mixture, in use since 1885.

The mechanisms by which copper, either as metal salts or as solid metal surfaces, kills bacteria are unknown. Dissolved copper ions are thought to play an important role in the killing mechanism even from solid copper surfaces. In fact, the toxicity of excess concentrations of essential metal ions (as opposed to non-essential metals such as lead and mercury) has been historically under-studied and has merely been seen as a confounding factor of studies of normal metal homeostasis. Copper is redox-active, a potent Fenton catalyst, and therefore may catalyse the production of reactive oxygen species in vivo. It is also at the top of the Irving-Williams series, meaning it will bind extremely tightly to proteins, potentially having deleterious effects on their function when present in excess.

Our goal is to identify and understand these toxicity mechanisms, both to shed light on new aspects of metal homeostasis and to find better ways of exploiting this toxicity for medical and commercial applications. To do this we’re going to use a combination of multiple experimental approaches in collaboration with a number of world experts in diverse fields. We will use proteomic methods to identify S. aureus proteins that become aberrantly associated with copper under high-copper growth conditions, and then characterise the functional effects of those aberrant associations using traditional biochemistry and molecular genetics. We will combine this with metabolomics studies of the effects of copper toxicity on bacterial metabolism. Finally, we will use genetic screens to identify mutant strains that display increased copper resistance. Together, this should give us a comprehensive view of the effects of copper toxicity on the cell, with the aim of elucidating the multiple mechanisms by which excess copper interferes with normal function. 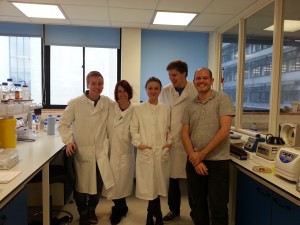 So we’re just starting off on a long-term quest, with lots of experiments to keep us busy for the next few years. It’s an exciting time in the Waldron lab.