In this blog post Graham Smith remembers the pioneering general practitioner Dr Julian Tudor Hart who died on the 1st of July. Graham interviewed him in June 1999.

Click HERE for a .mp3 audio extract from the interview and for a .pdf transcript of that extract: Tudor Hart in His Own Voice pt 1 extract 1

I still recall approaching the encounter with trepidation. My colleagues in the University of Glasgow’s Department of General Practice held Julian in great esteem and with much affection. The then head of unit 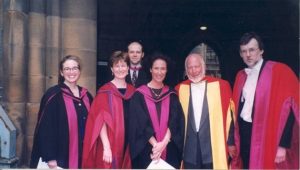 Professor Graham Watt rightly saw him as a significant figure in the history of general practice. I therefore wanted to get it right. A second challenge was that Julian was no fan of honours or building what he would have described as the cult of the individual. He had received an Honorary Doctorate from the University the day before, and as the interview reveals he had reluctantly agreed to the honorary degree because it could be used by the Department “a weapon” in our collective attempts to address health inequalities in Britain. He only agreed to be interviewed on the basis that we would discuss cult and myth making and the role of the individual in history.

It was a shock to hear that Julian died at the weekend. It was a bigger surprise to realise he was aged 91. He had such remarkable presence and vigour. 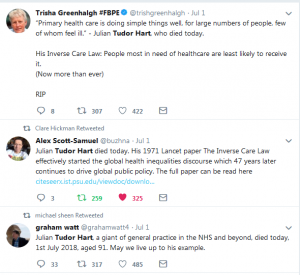 Born in South Wales in 1927, Tudor Hart would later serve as a general practitioner in Glyncorrwg, West Glamorgan for three decades. He is perhaps best known for what he called, the “inverse care law”: that the availability of high quality social and medical care is likely to vary inversely with the needs of the populations served. It also echoed Marx’s slogan “From each according to their ability, to each according to their needs”.

A great deal of his writing (see below) and practice was influenced by time spent with Archie Cochrane’s Medical Research Council funded Epidemiology Unit. He was later the first honorary president of the

Socialist Health Association and throughout a champion of the National Health Service. However, he was always learning. And teaching. What I took from him is the importance of applying theory to practice.

In 2006, Graham Watt nominated Julian for the Royal College of General Practitioner’s Discovery Award. In doing so Graham noted:

His ideas and example pervade modern general practice and remain at the cutting edge of thinking and practice concerning health improvement in primary care. …His life-long commitment to the daily tasks of general practice has always given his work and views a salience and credibility with fellow general practitioners. Julian Tudor Hart has been and will remain an inspiration to health practitioners and the communities they serve.

Oral histories are always co-productions. Their intersubjectivity, or “shared authority” as Michael Frisch put it, makes every interview unique. At the time of our encounter, Julian was at the top of his career. I was in a lowlier place as a Wellcome-funded history of medicine fellow embedded in a clinical department. However, Julian was kind enough to think seriously about my stuttering prompts and we had great fun. He asks his own questions too. At the end he says of the interview, “The whole bloody thing is a discussion between two left people with left politics… Two Marxists”. And then added, “I think that’s actually useful”. I continue to think that dialogue is useful. Many on the left and beyond will miss Julian’s contribution to public discourse.

Click HERE for a .mp3 audio extract from the interview and for a .pdf transcript of that extract: Tudor Hart in His Own Voice pt 1 extract 1

Hart, JT (1974). “Milroy Lecture: the marriage of primary care and epidemiology: continuous anticipatory care of whole populations in a state medical service”. Journal of the Royal College of Physicians of London. 8: 299–314.

Hart, JT. A new kind of doctor: the general practitioner’s part in the health of the community. London: Merlin Press; 1988.

Hart, JT. The political economy of health care: Where the NHS came from and where it could lead (2nd edn). Bristol: Policy Press; 2010.