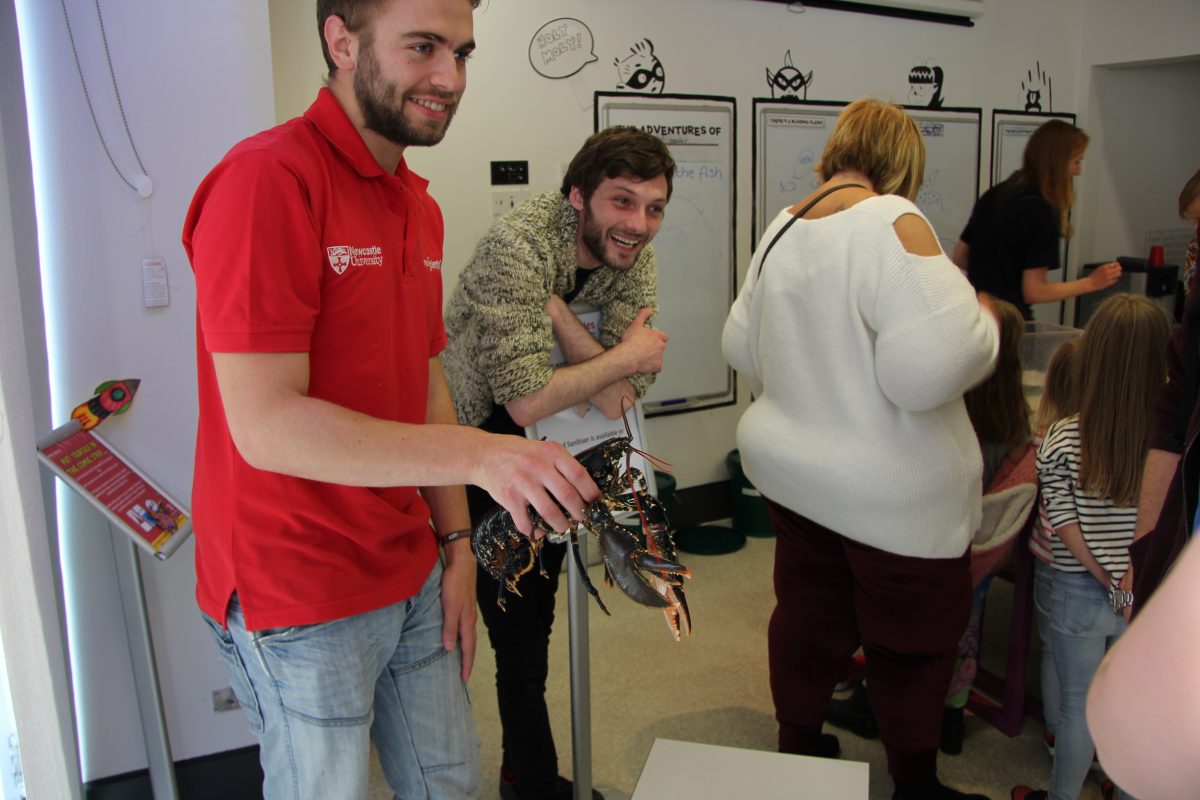 In September, visitors to Seven Stories: The National Centre for Children’s Books went ‘under the sea’ with Newcastle University’s Marine Sciences. We had a whale of a time!

Way back in April, I went on a trip to the coast to meet Annie Russell at Newcastle University’s Dove Marine Laboratory in Cullercoats. I’d heard that Marine Sciences, which is based in the School of Natural and Environmental Sciences, had some really interesting outreach and engagement initiatives, and I wanted to find out more…

While I was visiting, Annie showed me the creatures that live at Dove Marine, and told me about her work on engaging children and young people through taking marine science activities out to other venues. It struck me that it could be really fascinating to explore this with Seven Stories’ visitors, too.

So, on Saturday 23rd and Sunday 24th September 2017, Seven Stories and Marine Sciences collaborated to offer a special ‘Under the Sea’ themed weekend!

Faculty Outreach Officer Charlotte Foster led a team of students and together they took over Seven Stories’ Studio space. And they brought some amazing marine creatures with them!

Seven Stories’ visitors had the opportunity to see and handle starfish, sea anenomes, crabs and lobsters in designated handling sessions. It was amazing to see these creatures up close and learn about their behaviours and habitats. They fascinated both adults and children – even if some of them found Larry the lobster a bit scary…

Students from the Street Science team supported the handling sessions, origami and colouring in crafts, and an activity station all about marine conservation.

And Seven Stories’ staff got involved as well! They delivered under the sea-themed storytimes, colourful displays and decorations in the bookshop and café, and I even spotted some crustacean croissants…

Cathy Brumby, Seven Stories’ Senior Visitor Services Co-ordinator, said: “Charlotte and her team were fab! So friendly and approachable. The craft was great and well received, as well as the actual creatures, of course. It was lovely to be able to extend the activity throughout the building.”

Charlotte said: “Staff and students from Newcastle University’s Dove Marine Laboratory had a wonderful time introducing sea creatures at the Seven Stories ‘Under the sea’ event. It was a fantastic setting and Seven Stories were incredibly supportive (some even joined in holding a starfish or two!)

The weekend was a great opportunity for the next generation to learn about our amazing oceans. The team at the Dove hopes to continue working alongside Seven Stories to help inspire and enthuse families about the world around them.”

Find out more about Marine Science Outreach at http://www.ncl.ac.uk/nes/outreach/marine/