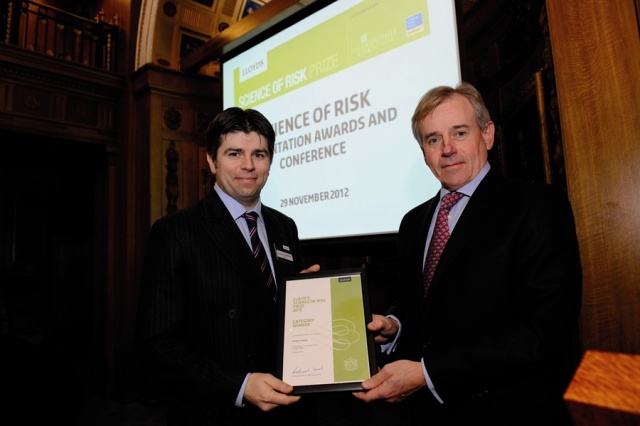 CESER Researchers have won the Lloyds Science of Risk prize in the Climate Change category for their work on risk modelling in the coastal zone.

The coastal conundrum – balancing the costs of erosion v flooding

A study [click here for publication] carried out by scientists from the Tyndall Centre for Climate Change Research[ii],[iii], and today awarded the 2012 Lloyds Science of Risk prize[iv] for Climate Change research, shows how the benefits of protecting our coastline from erosion must be balanced against the impacts of coastal flooding.

Focussing on a 72km stretch of shoreline along the East Anglian coast, the team detail the interconnection between the two risks of erosion and flooding and show that in some cases, allowing natural erosion could reduce the impact of flooding associated with rising sea levels.

Richard Dawson, Professor of Earth Systems Engineering at Newcastle University[v], lead author of this study says the research – which will be further developed in a new book to be launched in Spring 2013[vi] – highlights the trade-off between shoreline management policy and other priorities.

“We know that sea levels are rising and will continue to do so over the 21st Century, what we don’t know is by exactly how much, or how fast,” he explains.

“That means we need flexible strategies in place so that we are ready whatever the climate throws at us in the future.  These strategies must be coordinated and recognise the large scale connectivity of coastal processes – such as the movement of sand along the coastline.

“Given pressures of rising sea levels and large coastal populations, coupled with increased pressure on finances, it seems unlikely we will be able to afford to protect every stretch of coastline.  Land will be lost to the sea so we’re going to have to make difficult decisions about what our priorities are.”

Coastal defences put in place by Victorian engineers over a century ago have re-shaped the UK coastline, artificially protecting some areas but at the expense of beaches in adjacent areas.

This man-made situation increases the risk of flooding in low lying coastal settlements where beaches act as a natural flood defence.  Beach levels can be artificially recharged but Professor Dawson says maintaining this indefinitely along large stretches of coastline is likely to be unsustainable.

“Coastal areas typify the environmental challenge our society faces – their beauty and economic opportunities attracts settlement and they include some of our most important ecosystems and most productive farmland. Yet this exposes us to hazards such as erosion and flooding which will be exacerbated by sea level rise.

“Clearly we can’t, and wouldn’t want to, remove all our sea defences but there are difficult tradeoffs to be made in prioritising coastal management measures.

“Our research provides a common platform to get all parties round the table – local residents, policy-makers, insurers, scientists and farmers to name but a few – to understand each other’s perspectives, discuss potential compensatory arrangements, and collectively decide the best way forward.”

[ii] The Tyndall Centre for Climate Change Research is an active and expanding partnership between the Universities of East Anglia (headquarters), Cambridge, Cardiff, Manchester, Newcastle, Oxford, Southampton, Sussex, and recently Fudan University in Shanghai. It conducts research on the interdisciplinary aspects of climate change and is committed to promote informed and effective dialogue across society about the options to manage our future climate.

[iv] The paper won the 2012 Lloyds Science of Risk prize in the Climate Change category:
http://www.lloyds.com/the-market/tools-and-resources/research/exposure-management/emerging-risks/the-science-of-risk

[v] Professor Richard Dawson is Director of the Centre for Earth Systems Engineering Research (CESER) at Newcastle University.  CESER is an interdisciplinary research centre that addresses the analysis, design, engineering and management of sustainable solutions to address global change (including climate change).

[vi]  “Broad Scale Coastal Simulation: New techniques to understand and manage shorelines in the third millennium”, published by Springer and edited by Professor Robert Nicholls (Southampton University), Professor Richard Dawson (Newcastle University) and Dr. Sophie Day (Southampton University), will update this research and provide further insights into the Tyndall Centre’s coastal research. The book is due for publication in Spring 2013.

RAMSES (Reconciling Adaptation, Mitigation and Sustainable Development for Cities) is a €5m FP7 research programme that aims to develop methods, tools and case studies to design strategies, quantify costs and evaluate the impacts of adaptation to climate change in cities.

The Newcastle team, led by CESER Director Richard Dawson, have received €520k to (i) develop a high level climate risk assessment for European cities, (ii) extend our existing urban integrated assessment modelling to include pluvial flooding, evaluation of impacts on the urban economy of extreme events, and air quality and health issues, (iii) apply (and adapt) our integrated assessment facility for new city case studies – including one international location, and (iv) test a range of adaptation strategies to identify how best to reduce risks in cities and inform the design of transitions to more sustainable urban environments.