The first, on Integration across government and Whole-Place Community Budgets highlights the benefits of a strong evidence base for greater integration of services – particularly at the local level. Although disappointing there is no specific mention of infrastructure the message about the importance of integration is clear.

Until we are able to apply business models that capitalise on the opportunities afforded by interdependencies and delivery of integrated services; capture the wider economic, social and environmental benefits provided by infrastructure; and balance local needs with national priorities it seems unlikely that we will deliver good value for money to the nation.  iBUILD has just begun its journey but intends to deliver alternative approaches that address these issues, and work with public, private and third sector partners to encourage their uptake.

Professor Richard Dawson has been named a key member of an international effort by top climate scientists to help cities around the world address the causes and consequences of climate change, according to Dr. Cynthia Rosenzweig of NASA Goddard Institute for Space Studies and Columbia University’s Earth Institute in New York City. Rosenzweig is a founder of the Urban Climate Change Research Network (UCCRN). Richard Dawson is a member of the Network, andalso sits on the Steering Group. The UCCRN includes a group of approximately 500 researchers in cities located throughout the world.

More than half of the world’s population now lives in urban centres, many of them located in coastal or delta areas. Because of topography and population density, cities are disproportionately vulnerable to weather extremes like flooding from storm surges and heat waves. Cities are important economic engines, promoting economic development and providing jobs that support their own residents as well as large numbers of families outside city boundaries. They are also a source of some of the most innovative efforts to reduce greenhouse gases. In addition, says Rosenzweig, “Cities, not central national governments, already lead the action on responding to climate change. Our job is to help by providing the strongest possible physical and social science information and state-of-the-art knowledge so cities can prepare for rising temperatures and changing patterns of extreme weather events, and soften their impacts when they hit.”

Richard Dawson is a member of the expert team that will produce an assessment on the impacts and vulnerabilities in cities and their infrastructure, but also the mechanisms available to reduce these risks and their greenhouse gas emissions. The work is part of a larger effort by UCCRN to produce a resource for guiding cities in their response to climate change. The Second UCCRN Assessment Report on Climate Change and Cities (ARC3-2) will be published in 2015 and will cover a range of issues, from urban health to food to water and energy systems, transportation, economics and private finance, and governance. This will be the second major Assessment Report. City mayors praised the first, published in 2011, as a practical, action-oriented resource.

iBUILD is a £3.5m programme, funded by two UK research councils, following a request in the 2011 National Infrastructure Plan.  The programme is led by Professor Richard Dawson at Newcastle University. www.ibuild.ac.uk

iBUILD focuses on local and urban infrastructure, and in line with this, is establishing Centre hubs in Newcastle, Leeds and Birmingham.  These hubs will lead a series of events to explore alternative business models and the opportunities within these cities and their surrounding regions.

The Newcastle iBUILD Centre is holding a launch event on Wednesday 20 November from 3pm to 6pm at the Newcastle Business School on the Science Central Site.

The event will include a brief introduction to the research programme, discussion around how you can get involved with the project at a number of levels and identifying local priorities and case studies. There will also be presentations from Edward Twiddy (NELEP) and Andrew Lewis (Newcastle City Council).

If you would like to register to attend please complete the following form:  http://forms.ncl.ac.uk/view.php?id=5004 .

SHOCK (NOT) HORROR is an EPSRC-funded project that, over the past two years, has been looking at how ‘shock’ events can provide opportunities for learning about and transformation of infrastructure systems.

On Friday 22 November (10am to 4pm) we will be holding our final project dissemination event at The Royal Society in London. The event will include an overview of the project process, methodologies and findings. Interactive sessions will draw upon a number of  activities and experiments that the project has conducted to prompt discussion around identifying barriers and enablers for change and innovation of infrastructure systems. A final open discussion on the value of this research and its outcomes, alongside other on-going research programmes will aid identification of future research priorities.

If you would like to register to attend please complete the following form:  http://forms.ncl.ac.uk/view.php?id=5061. Please feel free to circulate the attached project information flyer to others who may be interested in the event.

A more detailed programme will be available nearer the time of the event.

As part of the British Science Festival 2013 being hosted at Newcastle University, researchers, staff, lecturers and students were invited to contribute to a comic being developed and designed by local comic enthusiasts. The comic was officially targeting children between the ages of 8-13, with a view to promoting STEM subjects and science in general. The proposed content of the comic had, you guessed it, a distinctly scientific theme to it, with organisers interested in hearing from those staff members who could fit their work (or at least make it look like their work fits) in to one of the following themes:

Some of the work related to networks, connectivity and infrastructure that is currently being conducted within the context of the Infrastructure Transitions Research Consortium (ITRC – www.itrc.org.uk) and also within the School of Civil Engineering and Geosciences, seemed like something that kids could be interested in, and the idea of presenting this type of work within a comic context offered an alternative and novel mechanism for communicating our research. Once an expression of interest in contributing to the comic had been lodged, it was simply a case of meeting an artist and writer assigned by the organising committee, and beginning to think about what a comic to represent networks, connectivity and infrastructure should look like! In fact, largely due to the expertise and imagination of the artist I had been assigned (Terry Wiley), the ideas began to come together, and rather than stick to the traditional panel-based approach we decided on more of a spider diagram affair to communicate how different bits of infrastructure are connected together. However I still wish we had managed to get our idea of slightly transparent paper with networks hidden until the page was held up to the light, to fly to communicate the idea of hidden or non-obvious connections! Oh well, maybe next time. For all those interested, the comic, entitled “Asteroid Belter”,  in hard copy format was distributed at the British Science Festival 2013 (7th-12th September), but more information about it can be found here. 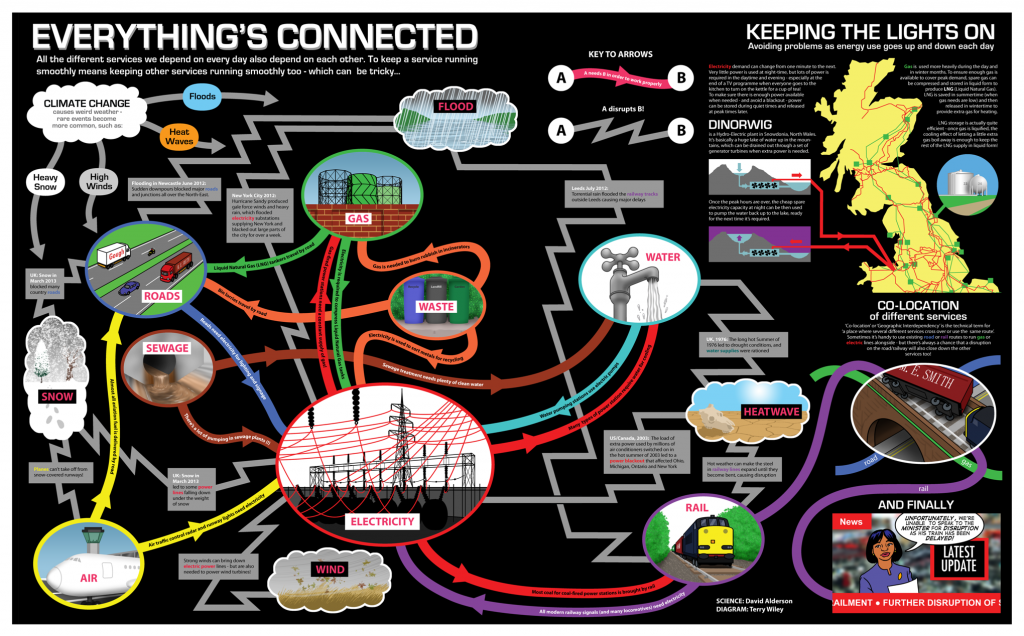 The hosting of the British Science Festival 2013 by Newcastle University gave staff and researchers of the School of Civil Engineering and Geosciences a chance to “show off”  some of their research to the general public, whilst also gave the opportunity to generate interest in science, technology, engineering and maths (STEM) subjects via hands-on activities delivered to school children from the North East. One such activity, named “BlueLine”, organised and delivered by Dr Geoff Parkin (Senior Lecturer in Hydrology), Professor Hayley Fowler (Professor of Climate Change Impacts), Dr Vedrana Kutija (Lecturer in Computational Hydraulics), Dr Claire Walsh (Researcher in Water Resources), Mr Vassilis Glenis (Researcher in Water Resources), Mr Philip James (Senior Lecturer in GIS), and Mr David Alderson (Researcher in GeoInformatics), focussed on explaining the complex nature of flooding and extreme flooding to separate groups of secondary school children from local schools in the North East. The schools represented are listed below:

The sessions began with Dr Parkin delivering a brief summary of some of the causes of flooding and extreme flooding, citing many references that relate to flood events experienced in recent years within the UK, including those that occurred in Cumbria in 2005, Tyne and Wear in 2008 and 2012, and many others. However that was just the standard “in-class” part of the activity, and although the seminar generated interest from the students in such topics as the water cycle, climate change, global warming, and the impacts of flooding, the “really” interesting part came when the children were let loose outside on the University campus, to take part in a crowd-sourcing exercise.

Crowd-sourcing in it’s most simple terms involves members of the public contributing data, information, comments, stories, pictures etc, which are then subsequently used within some form of analysis. Within the School of Civil Engineering and Geosciences, there has been a concerted effort since the flooding in a local market town, Morpeth, in 2008, by water and geomatics researchers and lecturers alike to collect as much crowd-sourced based information about flooding and flood events that occur within the region. The contributions from the general public about the locations and timings of floods, alongside photography giving a reasonable indication of flood depths, levels and wrack lines, can be used to validate computer simulations of flood models, developed within the School. Some of the results of these crowd-sourcing endeavours can be found here.

So the purpose of crowd-sourcing in the context of flooding was explained to the students in attendance at the Blueline event, and how it can be used to help better understand how a flood propagates through different environments. Since the floods in 2008 and 2012, Philip James has developed an Android-compatible “app” that helps to facilitate this process, by allowing a user to use the location technologies within an Android device (tablet, smart phone etc) to locate themselves, and then subsequently use the camera to take a picture. The great thing about the app is that this data can then be sent to a server and published immediately onto a website, giving a near-real time record and subsequent archive of a flood event. As stated, this type of data is invaluable to understanding how a flood arises and then subsides. For more information about the app and the technologies employed to deliver this solution, have a look here.

So the school children were escorted outside where a “pretend” flood had been erected around Newcastle University campus (effectively just a line of blue tape indicating a flood level based on a particular amount of rainfall), and asked to use the app and a tape measure to record information about the depth of this “flood”. This seemed to go down a storm (sorry) as it offered them a chance to do all the things that children seemingly would rather be doing i.e. being outside and playing with technology! Each pairing were asked to try to record at least one reading at each point where we stopped around campus. Further to this a series of QR codes had been erected along the blue line that the students were able to scan, subsequently directing them to a site of historical photography of the flooding that occurred on campus in 2012, as well as some “constructed” imagery of the imaginary flood that they were measuring. For more information on this site and the photos, please follow this link.

This week the British Science Festival is being held in Newcastle. CESER researchers are involved in a number of activities:

Luke Smith won best paper by a young author at the International Conference on Flood Resilience held at the University of Exeter this week. Luke’s paper, ‘A flexible hydrodynamic modelling framework for GPUs and CPUs: application to the Carlisle 2005 floods’ built upon his MSc dissertation project. Luke has just completed the first year of his PhD, ‘High-resolution hydraulic modelling of flood attenuation features in catchments’,co-supervised by Dr Qiuhua Liang and Dr Paul Quinn. Earlier this week Luke also had his first international journal paper accepted by Computers and Fluids. A great week, well done Luke.