The Times Higher Education magazine has published an independent survey sharing the views of university staff working at 150 higher education institutions, across the country. They analysed the views of thousands of people to find out what we really think about where we work.

The survey’s results are published in four key tables and Newcastle University is in the top five in all four categories:

To find out about jobs here and funded PhDs in areas infrastructure, sustainability and other areas

Duration of the Award
Three years

Project Description
Financing public infrastructure renewal and development presents acute problems for governments internationally in the context of changing demands for infrastructure services, shifting models of valuation, climate change, energy resource shortages, innovative technologies and growing interdependencies between infrastructural systems. Such concerns have been accentuated following the global financial crisis, economic downturn and recession, state austerity and fiscal consolidation and the expected role of infrastructure as a generator of economic recovery as well as financial savings. The research aims to better understand and explain the models, valuation, roles and processes of private sector investment in public infrastructure in an international comparative context.

Value of the Award and Eligibility
A full award covers tuition fees at the UK/EU RCUK rate and an annual stipend of £13,726 for up to three and a half years. Applicants must meet the EPSRC’s eligibility criteria.

Person Specification
To apply you must have:

How to Apply
You must apply through the University’s online postgraduate application form selecting ‘PhD School of Geography, Politics and Sociology – Geography’ as the programme of study. Please insert the code GPS11 in the studentship/partnership reference field. Please also include reference CURDS-iBUILD2014 in the research proposal field.

Applications are open for three generous PhD scholarships through the Newcastle Institute for Research on Sustainability.  The PhD topic can be anything that fits within the institute’s broad research programme.

Applicant’s should visit here to download the relevant application forms:

and speak to an appropriate Newcastle University academic to devise a project.  A number of indicative PhD topics have been placed on the web by CESER academics.

Back-to-nature flood schemes which use the land’s natural defences to slow river flow and reduce flooding could be a cost-effective way of tackling one of the biggest problems facing the UK today.

The schemes – which include capturing flow upstream to prevent floods downstream where they are likely to have a greater impact on infrastructure and homes – have been trialled as part of a five-year research project by experts from Newcastle University in partnership with the Environment Agency. 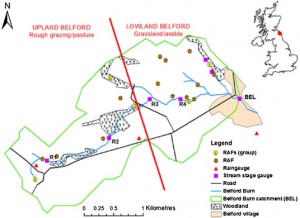 Using Belford Burn in Northumberland as a demonstration, the team have shown that by changing and hindering the natural flow pathways within a small catchment system, it is possible to manage the amount of run-off from the land. This reduces the risk of flooding in low-lying areas and also cuts down on pollution by preventing phosphorous and nitrates from being washed off the land.

Published this month in the academic journal Science of the Total Environment, the findings were presented last week at the House of Commons Office of Science and Technology to inform the Government’s Environment White Paper.

Research lead, Dr Mark Wilkinson, who carried out the work while at Newcastle University and is now based at the James Hutton Institute in Aberdeen, said: “Climate projections for the UK suggest that total rainfall during winter months will continue to rise and with it the risk of flooding.

“What we have shown at Belford is that by employing so-called ‘soft engineering solutions’ to restrict the progress of water through a catchment – disconnecting fast-flow pathways and adding storage – we have been able to reduce the risk of flooding in the lower areas and, most importantly, in the town.

“Belford is not unique and there are many other areas around the UK where these solutions could make a significant impact and potentially protect peoples’ homes from some of the more severe flooding we are seeing at the moment.”

Natural Flood Management aims to reduce the downstream maximum water height of a flood – the peak – or delay the arrival of the flood peak downstream, increasing the time available to prepare.

This is done by restricting the progress of water through a catchment and relies on one, or a combination of four key mechanisms which work with the environment to provide a sustainable solution to the problem:

• Storing water such as ponds, ditches and field attenuation bunds

• Increasing soil infiltration through the creation of ‘infiltration zones’ to help water get into the soil at certain locations, for example tree belts.

• Slowing water by increasing resistance to its flow, for example planting in the floodplain or riverside woodland

• Redirecting the water by channelling it away from the main flow into temporary water storage areas or buffer zones to hold the water back until the flood peak drops or restoring river meanders. This increases the length of the river and decreases its slope, slowing down the flow

Costing around £200,000, the Belford scheme was installed after a study of the area suggested the cost of a full conventional flood defence scheme for the town would cost in the region of £2.5 m.

“The situation in Belford is typical of many rural towns around the UK that are at risk of flooding,” explains Dr Paul Quinn, based in the School of Civil Engineering and Geosciences at Newcastle University.

Just five months after the feasibility report was published, the July 2007 storm hit the North of England and ten homes and businesses in Belford were flooded. It was after this event the Newcastle University demonstrator project was launched.

“One of the main reasons why the Belford scheme has been such a success is because we’ve had the support of the community and local landowners behind us,” explains Dr Quinn, who has since carried out a second Catchment Management Scheme at Netherton Burn, Northumberland.

“There is no single solution to flooding – no ‘silver bullet’ – but what the Belford scheme has shown us is what can be achieved with local support and a thorough understanding of the land and the local environment.”

I would not normally consider the arrival of a new phone to be newsworthy.  However, this one is different – the team behind it have developed a high-performance smartphone that has sought to place social and environmental values at its core without compromising on quality. Steps take include sourcing of minerals from conflict-free mines, a worker welfare fund, social assessment of factory procedures, reducing waste in the supply chain and investing profits into the establishment of recycling fund.  I was particularly impressed by the fairphone blog (yes much more active than this one for starters) that revealed in some detail the steps taken, their successes – but was also very honest about the barriers and limits.  This transparency provided a fascinating insight into the complexity of implementing social and environmental values into global supply chains, and its honesty is refreshing.

They have now sold and shipped their first 25,000 units – and I am a proud owner of a specially marked “First Edition” phone.  Aside from my natural passion for sustainable living, this initiative seemed particularly relevant to the iBUILD Infrastructure Business Models research programme that I lead.  A core goal of iBUILD is to try and harness the social and environmental value of infrastructure.  Parts of the iBUILD programme explicitly focus on issues around the infrastructure supply chain and the interdependencies between infrastructure and the economy – that provide challenges but also opportunities.  Although the gulf between mobile phones and infrastructure may seem large, I think there is much that we can learn from the fairphone journey!