With sponsorship from the Labour and Society Research Group at Newcastle University, Andy Clark is organising a workshop on Friday 8 June focussed on factory occupations in Britain, particularly in the period 1970-1990. Andy’s PhD thesis (2017) considered three instances of factory occupations led by Scottish women. Here he explains why he is looking forward to welcoming key scholars in the field for a thoroughly engaging day. 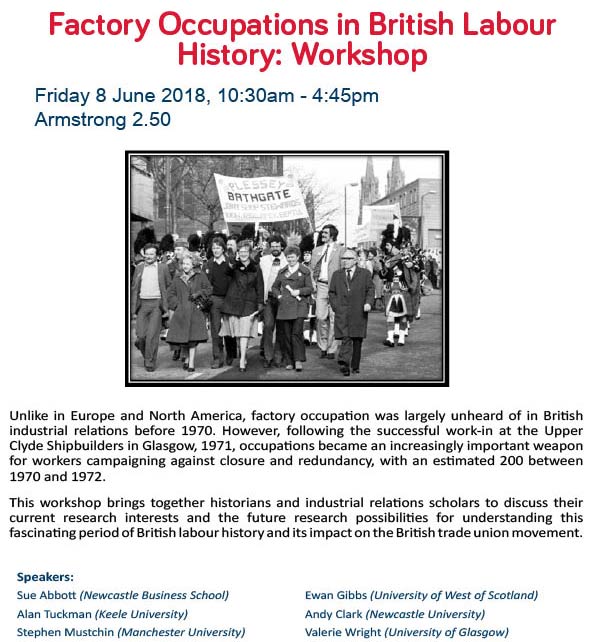 Occupations – the process through which workers seize control of a workplace in industrial dispute – are a fascinating mode of industrial action, and researching them raises several interesting research questions about work, class, job loss, and industrial action. The occupations of the 1970s and 80s received substantial contemporary coverage in the press, and interest from industrial relations scholars. More recently, there have been historical examinations of British occupations, and such publications have increased in the last three years. Oral narratives have been an important methodological approach to understanding the dynamics of occupation in the emergent research, and this workshop will bring together oral historians and historical industrial relations experts to discuss their research and the possibilities for future work in the area.

In contrast to the experience in Europe and North America, the vocabulary of ‘occupation’ was hardly used in Britain before 1971. However, following the successful work-in at the Upper Clyde Shipbuilders (UCS) in Glasgow, 1971, occupations became an increasingly important weapon for workers campaigning against closure and redundancy. Alan Tuckman estimates that 264 occurred between 1971 and 1981, and Michael Gold argues convincingly that their spread represented ‘one of the most remarkable developments [in industrial relations] during the early 1970s’(2004).

The workshop will explore the many reasons and dynamics that influence worker’s decisions to engage in occupation. Fundamentally, occupying gives the workers significantly greater leverage over the employer than other forms of industrial action. Through seizing the premises and holding onto plant, machinery and stock, workers can be in a stronger position when negotiating with management. This is particularly the case in disputes over closure; whereas striking achieves the aim of forcing workers to vacate the workspace, occupying can prevent the removal of assets unless force is used, which has rarely been the case in British experiences.

Occupations can also lead to greater levels of sympathy, support and active solidarity from other workers and local residents. As John Foster and Charles Woolfson noted in their study of UCS (published as The politics of the UCS work-in: class alliances and the right to work, 1986), an occupying workforce cannot be attacked as easily in the mainstream media as a group taking offensive action over issues such as pay. As occupations have largely been based on the right to employment and state and corporate responsibility to provide employment, occupying workers cannot be easily labelled as ‘strike happy’, lazy, or work shy, attacks frequently used by the right-wing media when confronting industrial action. Occupations also represent a greater challenge to the rights of private enterprise than the withdrawal of labour. Trotsky argued that the occupation is fundamentally different from the strike, as it ‘poses in a practical manner the question of who is the boss of the factory: the capitalist or the worker?’

On the other hand, due to the nature of the tactic, occupations tend to be more intensive for those involved than striking. Whereas workers on strike are more able to spend their time as they wish, an occupation requires them to spend a significant amount of time inside the premises to ensure a twenty-four-hour presence.

Sue Abbott, from the Newcastle University Business School will open the workshop with introductory comments, before Alan Tuckman will provide a keynote assessing ‘The Rise and Fall of work-ins and sit-ins in Britain’ following the action at UCS in 1971. This historical overview will contextualise the papers that follow, beginning with Occupations in heavy engineering. Ewan Gibbs will discuss his research on heritage and legacy of the 1987 Caterpillar factory occupation in Uddingston, Scotland. Stephen Mustchin will then consider the impact of deindustrialisation on the 1980 Gardner and 1984 Cammell Laird strikes and occupations.

After a break for lunch, I will continue the thread of deindustrialisation and occupation, considering the role of Scottish women in resisting closure, 1981-82. The final paper of the day will be delivered by Valerie Wright, who will consider the motivations for the occupation at Timex, Dundee, in 1983, and how the dispute has been remembered.

The day will end with a roundtable discussion, where all delegates are invited to contribute their perspectives on the papers heard, the occupation in British labour history, and areas for future research, collaboration and dissemination.

Registration for the workshop is free, lunch & refreshments are provided but please email me at andy.clark@newcastle.ac.uk to register. 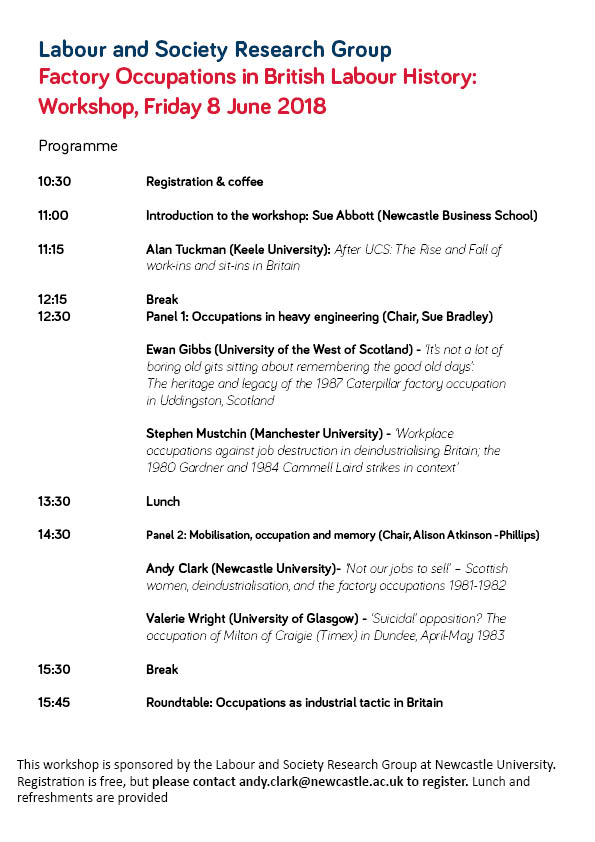