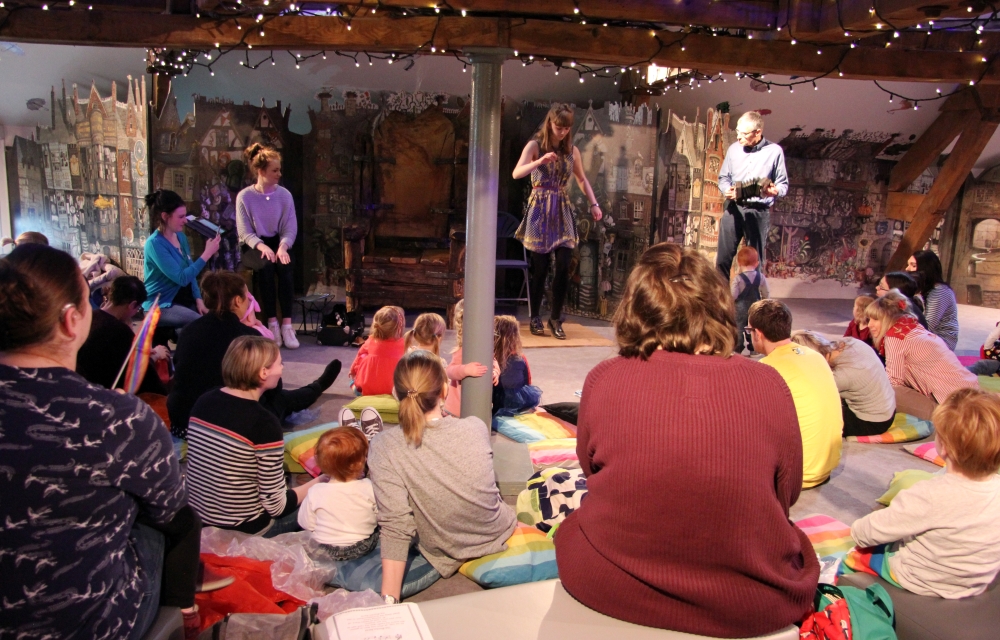 Last year, Newcastle University’s Music BA Honours students and Seven Stories: The National Centre for Children’s Books collaborated for the first time to deliver a musical event. Find out how this collaboration has developed in 2017/18 and explore this year’s sold-out Little Folk performance.

The students were undertaking the third year Music Enterprise module, which required them to plan and deliver a musical event. This gives students practical experience and insight into event planning, and helps them to develop skills in organisation, negotiating, networking, PR, marketing and finance. Here’s module leader Jane Nolan talking about the module, and how it links to her research (video by Evripidis Karydis, who’s currently undertaking an NCL Internship with Seven Stories):

Having worked with this cohort to deliver a Musical Creepy Crawlies event at Seven Stories in March 2017, Seven Stories were happy to offer this year’s students the same opportunity – to deliver an event as part of their public events programme. In October 2017, I went to one this year’s initial Music Enterprise lectures to meet the students and talk to them about Seven Stories.

Straight after the lecture, Imogen emailed me to let me know that her group wanted to work with us: ‘We are really interested to collaborate with Seven Stories to create an event based around music, dance and storytelling from around Newcastle.’

And – that’s exactly what they did! Over the months leading up to March, with support from Jane and the Seven Stories team, the students developed an interactive event, Little Folk, exploring folk songs and stories from the North East. They approached folk performers Alistair Anderson, Amber Jayne Cox and Heather Ferrier to take part, developed the programme and accompanying handouts, and created some beautiful marketing materials:

And all their hard work led to a sold-out event on 8th March at Seven Stories. The families who came to Little Folk sang the Blaydon Races with Amber, heard Alastair tell the story of the Lambton Worm and Heather taught us how to clog dance. And alongside that we heard the Northumbrian pipes, waved ribbons and played with sensory props, and even tried out the concertina! Here’s a taster of the event in the Little Folk promotional video that the students created:

For Imogen and the student organising team, “We were delighted to see such a fantastic turn out and we were really pleased with the event itself and some of the feedback we received from the audience. Hosting an event in collaboration with Seven Stories has been a really fascinating process, and it has been incredibly rewarding seeing how our input into such a brilliant charity has created an event that will hopefully leave an impression on the young audience. Seven Stories have a fantastic loyal audience base, which helped us sell out our debut event. We are now interested in developing what was initially supposed to be a one-time event for a university module into something larger, perhaps by looking into how this event could be held in other areas of the country where there are musical and cultural traditions.”

From Jane’s perspective as their module leader, “The students created an excellent event, with a strong brand and a compelling storyline for their marketing, which has enabled them to attract and engage their audience. They have developed a workshop format which could provide the basis for a future creative enterprise. The Music Enterprise module is intended to help students prepare for their future careers in the creative sector, which may be freelance or self-managed. The Little Folk team have devised, organised and presented a highly successful event, working in an effective partnership with Seven Stories, which will have enhanced their skills and confidence, personal resilience and professional development, and has added to their CVs.”

And Seven Stories loved it! Rose Mockford, Events Co-ordinator, said: “It has been a pleasure to work with this group of students who demonstrated a high degree of professionalism in all aspects of their event planning. Our young visitors and their families really engaged with the varied event programme which the students had devised and our unique Attic space was used effectively create a relaxed family event.”

“Little Folk was particularly special as it offered the opportunity for young people to creatively collaborate with Seven Stories to share local musical traditions and engage and build our audiences. Since this event we have hosted another musical event from Opera North and many visitors booked for this having first attended Little Folk – a true testament to the success of the project!”

Thanks to the students for all their hard work in delivering such a successful event! And it seems appropriate to end with a quote from The Blaydon Races: “Thor wes lots o’ lads and lasses there, all with smiling faces…”